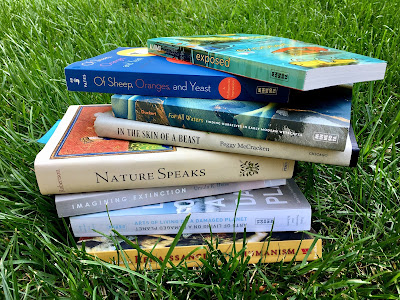 Can summer really be coming to its end so soon? And with an eclipse no less: what a great way to instill a sense of cosmic foreboding. Thank you, universe. Luckily my family and I depart for Maine tomorrow morning on our annual pilgrimage to reunite with New England kin for a few days. Because I have my syllabus ready to go and the GW MEMSI events scheduled and nearing readiness I can put off some of the end-of-summer worries that always seem to plague at this time of year.

I spent much of June and July away from home, mostly in the UK. I researched and wrote like crazy for the two big lectures I gave, and that meant I did not get to read as widely as I would have liked. In the fields I follow closest (medieval studies, early modern studies, environmental humanities) the number of excellent books to have appeared in the past year or so is at once exciting and daunting: I have come to realize that I will be playing an eternal game of catch-up, with my goal of getting to everything I want to read eternally receding to the horizon. Here though are a few of the books I did manage to spend some time with this summer, offered with a few thoughts on them. Warning: the reason I had many of these volumes in my possession is that they were sent to me by friends, or by university presses. The following is a selection likely based on amity and affinity rather than, say, scanning all the possibilities and with dispassion choosing a few. Still, these are books I would recommend to anyone for the good work they achieve. All the writers I am listing here also offer vibrant and compelling prose. Accomplished stylists, each writer offers the pleasures of both excellent scholarly analysis and sentences that make you nod your head in appreciation or awe.

So, in no order but that which the alphabet provides, here are eight books from the summer of 2017.

Stacy Alaimo, Exposed: Environmental Politics and Pleasures in Posthuman Times
A collection of essays composed over several years that demonstrates well something that I have long believed: Stacy Alaimo is among our most eloquent, perceptive and humane interpreters of what the Anthropocene signifies for all creatures, not just humans. I love this book's emphasis on protest as well as pleasure -- and its grounding in environmental justice as well as raced and gendered specificities. Exposed is a work that transcends its theorizations of contemporary materials. Humanists working in every period will want to read the book. The essays gathered here also give hope for change in dark times.

Joseph Campana and Scott Maisano, eds. Renaissance Posthumanism
This collection of nine essays (many of them by favorite writers of mine, including Holly Dugan, Erica Fudge, and Vin Nardizzi) sat on my shelf for far too long before I had the opportunity to read it -- and I am happy that a rainy day with no one else at home recently gave me the excuse to lose myself in its contents. The volume proves something many of us who work in non-modern pasts have long been asserting: today's critical posthumanisms are queer companions of earlier conceptions of entangled identities. Minerals, mandrakes, and monkeys are not the limners of the human so much as its vexers, guarantors that any desire for anthropocentricity will remain a mere dream. Reading through the essays was like listening in on a lively seminar. Essential issues are raised repeatedly and amplified, while the shared conversation is both coherent and bracing.

Lowell Duckert, For All Waters: Finding Ourselves in Early Modern Wetscapes
I have collaborated fairly extensively with Lowell Duckert in the past (this this this this) and have always enjoyed his paradoxically aqueous yet lambent writing style as well as his critical generosity. For All Waters displays both, finding in early modern as well as contemporary archives saturated modes of reading and living that better speak our entanglements with an active, elemental world. What also comes through on every page is conviction, optimism and the author's good heart. A book to immerse yourself within and savor.

Ursula K. Heise, Imagining Extinction: The Cultural Meanings of Endangered Species
I'd been fortunate enough to see Ursula Heise present work in progress from this book at several conferences, and so had been looking forward to this book eagerly. Nothing here disappoints. Against the elegiac and anthropocentric modes we reflexively adopt when framing (even within a scientific realm) species extinction, Ursula Heise urges us to rethink how we assign value to varied forms of life. Environmental justice thereby becomes multispecies justice. By emphasizing the centrality of story-telling to perception, care and conservation, she is able to shift attention to the intimacy of genre and narrative to the generation of ethical attachment and the futures of environmental thought.

Peggy McCracken, In the Skin of a Beast: Sovereignty and Animality in Medieval France
One of our foremost scholars of human-animal interrelation in the Middle Ages, Peggy McCracken offers a new way of thinking about bestial intimacy, through the skin as surface, catalyst, symbol and invitation. Desires for domination and demands for care entwine; sovereignty becomes a fraught assertion of power; subjectivity and identity become legible through surfacing more than inscription. The latter matters because unlike many critical analyses of biopolitics and sovereignty, McCracken's method emphasizes becoming over being-made, demonstrating how the animal-human nexus in medieval narratives and manuscript illustrations offers possibility for what might unfold rather than evidence for what has already been. An invigorating book that will change how I teach many medieval texts in my class this fall.

Kellie Robertson, Nature Speaks: Medieval Literature and Aristotelian Philosophy
Do not let the rather specific subtitle to this magisterial work of scholarship mislead you. Although Nature Speaks is indeed about Aristotle's influence upon the conception of nature in the late Middle Ages, the book offers a penetrating analysis of the risks and rewards of embodying nature -- especially as a figure that could be represented as possessing a human body (always a woman) and an authoritative voice. Robertson describes at length and with aplomb the intimacy of physics to fiction and nature writing to poetry. Against the disciplinary divisions which eventually robbed Nature of her voice, she details how medieval writers found ethical possibility in the centrality of the human imagination to the natural sciences. Along the way she makes a convincing argument for what a reinvigorated humanities in the present might become.

Anna Tsing, Heather Swanson, Elaine Gan, and Nils Bubandt (eds.), Arts of Living on a Damaged Planet
I've always wanted to be the author or editor a book published as a tête-bêche, since I love the critical possibilities such a conjoining brings. I was therefore well disposed to admire Arts of Living on a Damaged Planet. The collection of essays and art offers an energetic and interdisciplinary colloquy on how to dwell on a planet we have ruined: cognizant of the violence that will continue to haunt the landscapes we inhabit, but dedicated as well to doing better (especially through being able to articulated our entanglement with other species and wider worlds). Considering that the book is broken into sections on "Ghosts" and "Monsters" (two topics dear to my heart) I did hope to see more thinking through the specificities of such figures, but they remain mostly metaphoric. Much work remains to be done on bringing monster theory into an ecological realm.

Julian Yates, Of Sheep, Oranges, and Yeast: A Multispecies Impression
This witty, dexterous and beautifully written volume follows animals, fruit and unseeable microbes as story-rich media. By detailing the genres, possibilities, and plots such varied actants enable, he grants each its ability to insinuate itself into and even co-compose narratives with humans (often scripts in which humans are relegated to playing ancillary roles). These beings write in a way that demands multimodal reading to discern -- allowing Julian to articulate an innovative critical praxis that will have profound implications across the environmental humanities. This book opens worlds, and reaffirmed for me how fortunate I feel to be its author's collaborator on a book in progress.
Posted by Jeffrey Cohen at 10:28 AM