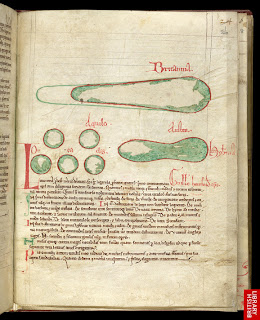 My M.A. students and I read Gerald of Wales's "History and Topography of Ireland" last week [in O'Meara's imperfect translation, I hasten to add], and also read alongside that Asa Simon Mittman's essay "The Other Close at Hand: Gerald of Wales's Marvels of the West" [in Bettina Bildhauer and Robert Mills, eds., The Monstrous Middle Ages] and JJC's "Hybrids, Monsters, Borderlands: The Bodies of Gerald of Wales" [in Jeffrey Jerome Cohen, ed., The Postcolonial Middle Ages], which I myself also supplemented by reading JJC's expansion of that essay in his new book Hybridity, Identity, and Monstrosity in Medieval Britain: On Difficult Middles, "In The Borderlands: The Identities of Gerald of Wales."

In the Second Part of his History, "The Wonders and Miracles of Ireland," the figure that really jumps out at me is the "extraordinary man . . . if indeed it be right to call him a man," who "had all the parts of the human body except the extremities which were those of an ox." Most important, I think, is the fact that he "attended the court of Maurice [fitzGerald] for a long time" in Wicklow and "came to dinner every day and, using his cleft hooves as hands, "placed in his mouth whatever was given to him to eat." Most interesting, too, for me anyway, is the fact of the image of the ox-man on the inside of the fitzGerald castle, while on the outside, the supposed "Irish natives of the place, because the youths of the castle often taunted them with begetting such beings on cows, secretly killed him in the end in envy and malice--a fate he did not deserve." This is interesting because, while the ox-man himself is welcome within the castle--the site of privilege and also of the colonialist imperium--the taunting of the natives is "shouted," so to speak, from within that castle and over its ramparts, and is therefore directed toward those who are seen as not worthy of being invited inside, although their "bestial" progeny is welcome. Further, it is really extraordinary, given the tone of the episodes that follow this one, that the ox-man, for Gerald, is obviously a character to be regarded with some admiration, and even, pity, partly because, by virtue of his hooves which he can gesture and eat with as hands, he marks himself as more human than ox [the ox-man's hands/hooves are especially significant in marking his humanness when we conside that he does not possess speech and can only "low" like a cow]. And yet, following shortly after the story of the ox-man, we have two stories about women who have sex with animals--a goat and a lion, respectively--that Gerald very pointedly frames within the language of moral disgust and disapprobation [the acts are detestable, abominable, etc.], and even goes so far, in the case of the example of goat-woman intercourse, to excuse the goat who, by its very "nature," has to "obey" the more "rational" creature--the woman--who should know better, and because she doesn't, is guilty of abusing the animal.

Although JJC has argued that Gerald's Historia of Ireland does not reflect as "much of the conflicted identifications that would characterize his later writing about Wales" ["In The Borderlands," p. 85], I wonder if the ox-man passage might not serve as a site within the Ireland text that reveals some of Gerald's anxieties about his own hybrid identity, while also demonstrating [as I am trying to hint at in my recent exchanges with Michael O'Rourke] that, whether in the Middle Ages, or our own time, "woman" is the most queer and abject figure of all. JJC would agree, I think, for he as he also writes, although Gerald often draws explicit comparisons between animals and the Irish natives' supposed "animal" nature, the story of his ox-man "does not fit the unremittingly reductive program of representation displayed elsewhere" (p. 89), and while Gerald "evinces little sympathy for the Man Bull of Glendalough [a story that immediately follows the story of the ox-man] or for the Irish themselves," the ox-man is, "despite some initial hesitation on Gerald's part, undeniably human." Finally,

. . . it is difficult not to see in the monster of Wicklow a figure for a gemina natura: twinned nature, dual race. Murderously rejected by the indigenous population, sustained by a court amused by his spectacular oddness but discerning in his voice only meaningless sound, the Ox Man nurtured at the Marcher's colonial outpost belongs nowhere. In the irresolvable differences that the semibos vir incarnates, in this monstrous body teetering between categories, Gerald reluctantly beheld a vision of his own hopelessly heterogeneous self. For the Irish were not the only gens ex bestiis solum et bestialiter vivens ("people living on beasts only, and living like beasts"), at least when the islands were surveyed by English eyes. [p. 90]

But what of the woman who has sex with a goat, and is even more bestial than the goat because while the goat would merely obey the more rational nature placed above him, the woman purposefully perverts not just her own nature, but also that of the goat, and therefore effects a double-perversion, a double-lowering? While the ox-man, who, we can presume from the text, is the unfortunate yet "miraculous" and still-somehow-more-human-than-animal progeny of Irish men copulating with cows, the children of a woman copulating with a lion should, along with the woman herself, be killed, "not for the guilt, from which he is excused as being a beast, but to make the remembrance of the act a deterrent, calling to mind the terrible deed."
Posted by Eileen Joy at 6:23 PM

speaking of "gemina natura"...
i was reminded of this poem

I was going to add this to the Princess Buppy thread, but it will do as well here. This was my father's theme tune for me when I was little because of my curly hair, but of course it is the last lines that stuck in my head. The Mary/Eve - perfect/evil (perfectly evil?) dialectic constructed for little girls and women (and internalised by them) makes the queering of real women essential if they are to be allowed to be.

Married women - and the increasingly conflicted voices about married women in the high and later middle ages- carry a lot of this freight of queering - the WoB/Margery Kempe syndrome (and eg in Burger's Chaucer's Queer Nation). Is this part of Gerald's colonialist civilising agenda? More importantly are there other medieval writers (other than CdePizan) who directly address the queerness of women without pushing them into marriage? n50

More to say later, but I want to give everyone a link to this.

N50: yr Xine de Pizan reference, is it to Desmond and Sheingorn's piece on bestiality and women in the Epistre de Othea in Burger/Kruger's Queering the MA? Just reading that on the subway a moment ago...

Karl - many thanks for the reference. And no - my reference was only to CdP herself - like you must dash now - maybe more later.
n50

You state in you article that Gerald demands that the woman (who had sex with the goat/lion) AND her children should be killed as punishment. This is, in fact not at all the case. Gerald does not mention progeny at all, he asserts that both the woman AND the beast (ie the goat/lion) should be put to death (no mention of children whatsoever in the latin, nor in O'Meara's translation):

As O'Meara puts it: 'The beast is ordered to be killed, not for the guilt, from which he is excused for being a beast, but to make the remembrance of the act a deterrent, calling to mind the terrible deed.'