In support of false gods 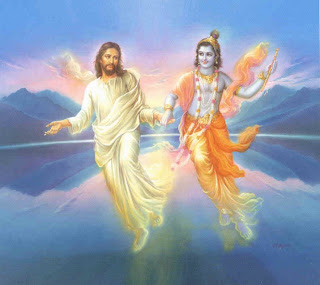 Washington DC is a city filled with protests -- and with good reason. Citizens of the United States and citizens of the world have much to disagree about, especially when it come to governance and foreign policy.

A small protest, catalyzed by a small event, has caught my eye, and I want to share it with you. I'll make it relevant to the medieval themes of this blog in two ways by saying: (1) ITM is a space more polytheistic than the actual geographies studied by most of us who participate in its conversations (that is, the blog follows Sheila Delaney and Steven Kruger's caveats in not making an easy equivalence between "religion in the Middle Ages" and "[dominating forms of] Christianity"); (2) if John Mandeville could be tolerant of those whose creed revolves around many gods, why can't we? I could also add a more personal third reason: as those who read my posts regularly know, I worship at the altar of many idols, including a certain Tiny Shriner. The classicist in me believes that we all need our lares et penates, household divinities.

So here is a terse article about a recent Hindu prayer recited in the US Senate, the prayer's disruption by three protesters who called it an "abomination," and the entire religion's condemnation by Operation Rescue/Operation Save America as placing "the false god of Hinduism on a level playing field with the One True God, Jesus Christ." The disruption and condemnation could, I suppose, be dismissed as the work of such a small number of people that neither event is significant. Yet what bothers many people and organizations is the lack of anything much in the way of support for the Hindu chaplain and the prayer from the senators who witnessed the disruption.

U.S. Hindu organizations are urging presidential candidates to denounce the protesters who disrupted the Senate as the first-ever Hindu opening prayer was being delivered this month.

Ante Nedlko Pavkovic, Katherine Lynn Pavkovic and Christan Renee Sugar -- identified in the Christian media as a couple and their daughter -- were removed from the Senate floor and arrested by Capitol Police on July 12 after they began shouting, "This is an abomination," and asking for forgiveness from God.

The three, from Davidson, N.C., were arrested and charged with disrupting Congress, a misdemeanor.

A brief prayer was then delivered by Rajan Zed, a chaplain from Reno who was invited by Senate Majority Leader Harry M. Reid (D-Nev.).

Several Christian organizations spoke out against the prayer, before and after it was delivered. The American Family Association circulated a petition, urging its members to contact their senator to protest the prayer. "This is not a religion that has produced great things in the world," it read. The Rev. Flip Benham of Operation Rescue/Operation Save America issued a statement saying the prayer placed "the false god of Hinduism on a level playing field with the One True God, Jesus Christ."

Although the InterFaith Conference of Metropolitan Washington issued a statement July 17 saying its members were "deeply saddened" by the interruption, no senators present spoke out against it publicly, according to the Hindu American Foundation and the International Society for Krishna Consciousness (ISKCON).

Both organizations said they are disappointed with the legislators, and they sent letters this week to presidential candidates and senators, asking them to condemn the incident.

"We call on you to follow the example set by [Reid] and take a stance in defense of religious freedom and equality, in the face of opposition from extremists and fundamentalists," the ISKCON letter said.

A focus of the Christian organizations was the perception that Hindus are polytheistic. "Our national motto isn't 'In gods we trust,' " Janet L. Folger, president of Faith2Action, said the day before the Senate prayer.

However, the U.S. Hindu groups say this criticism reflects ignorance of the monotheistic underpinnings of their faith. Hinduism has many deities, all manifestations of one god.

Although there were only three protesters, said Ishani Chowdhury, executive director of the Hindu American Foundation, "if you look at it as a reflection of a larger number of people . . . we need people to condemn what happened and highlight the need for dialogue."

According to the foundation, there are 2 million Hindus in the United States.

New blog motto: In gods we trust. Meanwhile, if you are a US citizen, consider contacting your senator or favorite presidential hopeful.

Oh yes, if you are wondering Alcuin-like "What has Krishna to do with Christ?" -- or are curious as to where I obtained the image of the two gods in a celestial frolic -- go here.
Posted by Jeffrey Cohen at 6:49 AM

Thanks for this Jeffrey. I'll contact them, but I expect my Senators--Clinton and Schumer--to do what they normally do.

I wonder, however, if the pushback against these Xian bigots has missed its news cycle? A lot has happened since the prayer got shouted down, and a lot is about to happen (at least as I imagine it): a fuller picture of Pat Tillman's death, the (knock on wood) impending impeachment of Gonzales, contempt charges, &c.

I wonder if it would be more effective for the Senate just to try again. Would it be more pedagogically effective to begin with another Hindu prayer while calling no particular attention to it? While we'd lose some of the deliberate shaking up of notions of America's "natural" faith, we'd gain a sense that other faiths could officially work in this nation simply as a matter of course. I'm not sure.

And I'd love, even more, for various corporate media not to behave as if Hinduism is such a great departure from the way Americans normally worship whatever they worship. There's no one Christianity; there's no one faith. But there's a tendency in the corporate media to present all Xian sects, and even Xian sects and Judaism together, as more or less the same. The standard phrase on CNN &c is "people of faith," right? But I was raised in a fundamentalist sect, now quite popular, that believes that Mormons--say, Mitt Romney and Harry Reid--were all going to hell, and that Jews would either convert or be damned during the End Times (a point, by the way, that "person of faith" Joe Leiberman seems okay with).Could this fundamentalist freakout in the capital be an opportunity to highlight what this Xian sect believes, what Benedict believes about the particular force of Roman Catholicism, and so forth? Unlikely, but something to be hoped for.

For me, of course, while I'd like to end the centuries-old run of Xian prayers, it would be much better to eliminate the prayer altogether. I'm not sure I trust in anything, but I trust in gods least of all.

Karl, you are ever the optimist. I fear that all the wood-knocking in the world won't get us much closer to truth in government at this moment. Anyway, news cycle missed or not, I was thinking that this is an issue about which medievalists could speak with some relevance, since religion (and the supposed universality of Christianity) are topics we have to think about all the time. Both those topics are related to your good point about this thing that gets called "Judeo-Christian" and that doesn't really exist -- at least not in the harmonious way that is supposed.

As to doing the Hindu prayer again, why not? But it would also be good for the moment of the first performance to be marked as significant, the shout-out protest against it wrong.

"false god of Hinduism" ?
"produce great things in the world" ?

The hollowness of the rhetoric recalls an older posting (which also says a couple things about Zizek and Badiou) by k-punk.

Hear hear for the maintenance and adoration of household gods, and for the plurality of divinities. Maybe one day people can stop hating themselves so much that they have to deflect that negative emotion onto others.

Just read something else, over at Poetix, about the politics of envy that glosses Eileen's last comment, analyzes scandal, and poses a very interesting question.

And to take the envy (a love of nothing?) issue one little step further, are people who attack other peoples god(s) really just confessing disbelief in or the death of their own?