How Soon Is Now? (draft review)

My Writing Lockdown continues apace, but I do have to emerge from time to time to fulfill other scholarly obligations. Below my draft of a review of Carolyn Dinshaw's How Soon is Now? for Clio. The journal has a theory-savvy interdisciplinary readership, so I do not focus on the book as a contribution to medieval studies but to the critical humanities at large.

My thanks to the students of Environ Body Object Veer for their thoughtful symposium on the volume, and to Rick Godden and Eileen Joy for reading early versions of this piece. Now let me know what you think. 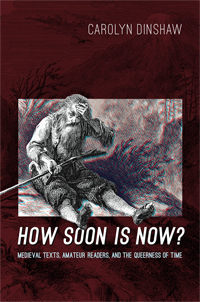 
How Soon Is Now? is scholarly, eminently readable, and insightful. Creative in its structure and wide in its ambit, Carolyn Dinshaw’s long awaited book cogently argues that the now we inhabit is denser with possibility than we have imagined – and that medieval writers as well as their amateur readers have known this conjunctive truth for a long time. The book is required reading for anyone interested in the intersections among history, community, textuality, sexuality, writing, dreaming, loving – that is, for anyone who cares about the humanities today.
Posted by Jeffrey Cohen at 3:58 PM