NOW PUBLISHED: The Holocaust and the Middle Ages [postmedieval] 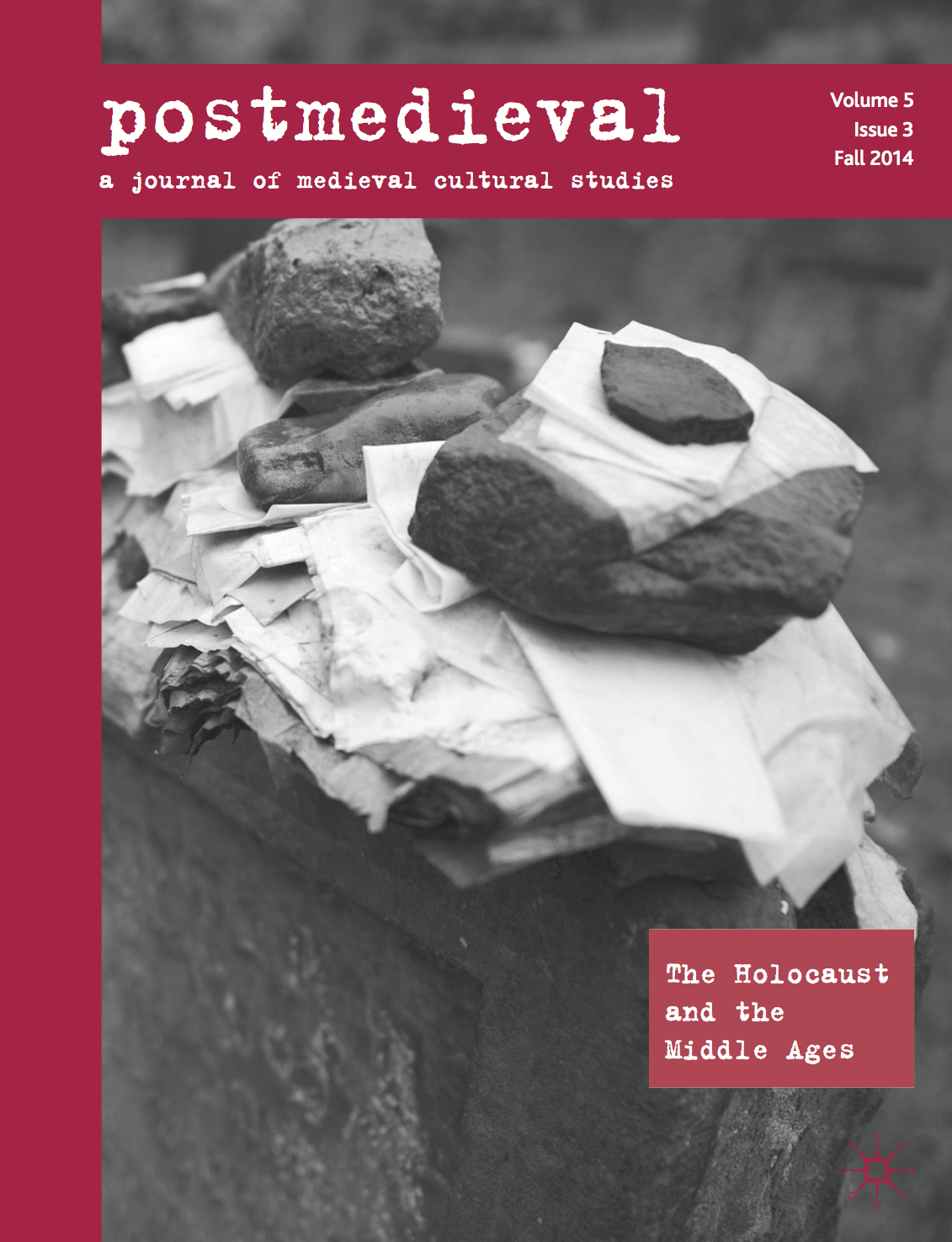 The newest issue of postmedieval is OUT, on "The Holocaust and the Middle Ages," co-edited by Hannah Johnson and Nina Caputo, and I want to thank them for such a gorgeous and intellectually and historically important set of contents. I want to also thank those who offered helpful commentary in the open, online crowd review of the pieces collected here: Anthony Bale, Anna Klosowska, Kathy Lavezzo, and Karl Steel.As with all issues of postmedieval, I am so grateful for these scholarly commitments to holding the past and present in productive critical tension and to attending to what Hannah and Nina describe in their Introduction as "the difficult dialogue between the past and the present."

More fully explicated, from Hannah and Nina's Introduction, "The Middle Ages and the Holocaust: Medieval Anti-Judaism in the Crucible of Modern Thought,"

The common declaration never again evokes justified moral outrage at the atrocities of the Holocaust. It has been well enough integrated into our collective consciousness – in North America, at least – that its subject requires no elaboration or contextualization: never again will such wholesale destruction befall the Jewish people. And the world must never forget. This phrase establishes the Holocaust as historically unique, but also marks the Nazi persecution as the culmination of a millennium-long cycle of escalating collective suffering with its beginnings in the Middle Ages. Debates about this paradoxical trajectory have a long history. Already in the 1930s, scholars who sought to comprehend the virulence of Nazi antisemitism found a corollary in medieval Jewish history. In this context, ‘medieval’ represents primarily a psychological and emotional state, not a chronological timescape. The term ghetto may be an invention of the sixteenth century, and the Black Hundreds were inciting anti-Jewish pogroms in the early twentieth, but it is the medieval period that is strongly associated with origins of all kinds – not least of religious violence, mass incitement and legends of Jewish perfidy and evil.

While there are always potential pitfalls in making historical comparisons, in the wake of the Holocaust the Middle Ages have nevertheless served as a useful hermeneutic in the struggle to find a precedent for a historical and ideological process that seemed thoroughly unprecedented. But if such associations operate as powerful engines for prompting historians’ continued reflections on the arc of Western history, and Jewish history in particular, they can also be damaging when mobilized for other ends. The Nazis themselves sought to bolster the legitimacy of their regime by invoking medieval exemplars – though, unlike their victims and opponents, they did so in order to glorify an ‘Aryan’ past they revered and wished to resurrect. The malleability of such medievalisms has long been recognized as part of their ideological, as well as heuristic, utility, but the urge to invoke the Middle Ages when contextualizing the Holocaust in the broad sweep of European and Jewish history speaks to a longstanding problematic of historical understanding.

When the distinguished historian Salo Baron testified at the trial of Adolph Eichmann in 1961, he did so as an expert in Jewish history, but also, crucially, as a medievalist. In being called upon in his professional capacity to account for the long history of Western antisemitism, he acted as but one scholar in a formidable tradition that has sought to understand phenomena which are at once temporally specific, and united by uncanny features of continuity and repetition. Writing after the trial concluded, Poliakov stated that Baron’s task had been ‘to describe the background against which the destruction took place’ (Poliakov, 1962, 59). However, Baron’s later writing on the subject and the questions asked of him clearly indicate that this ‘background’ was not simply a matter of accounting for the years just prior to the war, but involved questions of deep time, and the long history of Jewish life in Europe. While the Middle Ages are often taken as a kind of ground zero for a virulent strain of antisemitism, efforts to understand the Holocaust not only reach back to medieval ‘precedents,’ but also view medieval history through a uniquely modern lens.

In this issue of postmedieval, we concern ourselves with this difficult dialogue between past and present. What is the historiographical and philosophical consequence of self-consciously examining the Middle Ages through the filter of the Holocaust? Why is the impulse to turn to medieval examples so enduring? Do such comparisons compromise the effort to preserve the integrity of the medieval (or, for that matter, the modern) as a distinct historical era? Baron’s testimony is significant, not only because it represents a moment when such questions converge in the person of one historian, but also because Baron himself struggled with the tension between a narrative of the Holocaust as a singular event and one that frames it in the broad context of recurring Jewish persecution.

As regards the more specific contents of the issue (which include pieces by Laurie Finke & Martin Shichtman, Mitchell B. Hart, Daniel Wollenberg, Jean-Claude Milner, Heather Blurton, and Richard Cole), Hannah and Nina write,

The following essays take up the challenges of adequate language and problems of conceptualizing medieval contexts in the wake of the Holocaust that remain potent and challenging. Heather Blurton reminds us of how easily our interpretations can become back readings colored by modern assumptions if we do not attend to historical specificities. When Agamben reads Richard of Devizes, he seizes upon Richard’s use of the word ‘Holocaust’ to make an etymological argument that misses the deeper resonances of the word’s meaning in its medieval context, which hints at a multi-layered commentary on medieval Jewish–Christian relations. Richard Cole takes up what he calls the ‘Jewish massed body’ as it appears in Old Norse literature, where Jews appear as an undifferentiated mass, thinking and acting as one. While this might seem like an early harbinger of the tropes of conspiracy and threat haunting the imaginations of many later antisemites, Cole demonstrates how such themes resonated differently in a cultural context where there was not any significant or settled Jewish population until much later in time. Finally, Fred Evans’ closing essay, on the ‘multi-voiced body’ and the need for an ethical spirit of generous listening and engagement, captures the mood and tone of the volume, as well as its urgency. Reflecting on the challenge scholars face in the effort to listen courageously and attentively to the past, Evans also draws attention to our collective impulses both to amplify quiet voices and to silence them as well. The stakes of such an argument are clear in the debates about the medieval roots of the Holocaust. The half-century long disjuncture between interpretations of the Holocaust either as singular and without parallel or as the most extreme persecution in a centuries-long process tests our resources and definitions of ethical witnessing. Where politics and historiography are inextricably intertwined, as was the case at the Eichmann trial, we struggle with questions of justice as well as meaning.

You can see and access the whole issue HERE.
Posted by Eileen Joy at 11:49 AM