Lost at Sea / Forlornly Hopeful (in the style of Lorrie Moore) 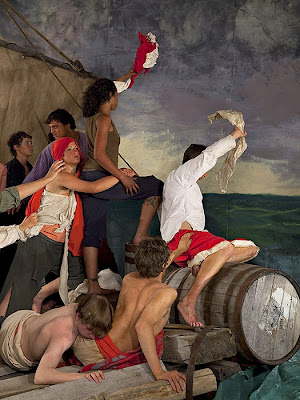 Herewith, I share the text of my short piece for the roundtable session that Jeffrey organized, under the auspices of GW MEMSI, under the rubric of "Lost." I was somewhat nervous about presenting this because of its personal aspects, but after hearing Christopher Roman, in his gorgeous and moving piece "Lost Time," reflect on the role of food and eating in relation to time, memory, nostalgia, devotion/praying, love, and sorrow via the lenses of medieval mysticism and also the narration of a break-up with a boyfriend that involved eating brownies together, I breathed a sigh of relief. And as the session ended with Anne Harris's moving tribute to her father, whose brain injury led to 9 years of a condition where he forgot nothing but it was "all forest and no trees" ("Lost in Thought"), there was an interesting autobiographical thread within the session that also showcased really smart, and also funny as hell, presentations on dual number pronouns in Old English & two-ness (Daniel Remein), the obscure and now mainly lost Middle English word steven (Randy Schiff), air pollution in West Virginia and the loss of breath (Lowell Duckert), and words that desert one lingua franca and take up covert and often subversive residence in other lingua francas, like "double agents" (Jonathan Hsy).

It will be a long time before I forget Dan Remein's impersonation of a 1940s noir-style private eye who is looking for the lost pronouns, or his handout, which included an illustration of a milk carton, with the caption "Have You Seen Me?" followed by examples of all six dual number pronouns in Old English. Nor will I forget Lowell using an Air Supply song ("Lost in Love") as his structuring frame, nor Jonathan using a rubber superball to demonstrate how some words bounce into other languages and then pop back out in ways you would never expect. Indeed, Jeffrey had organized the session by first asking us to choose/invent our own "lost" catchphrases, and then a few months before the Congress, we each received an object from the Dept. of Found Objects, which we were asked to weave into our presentation somehow. In point of fact, I never received my object. I received an envelope that had been ripped open, and some green tissue paper (Lowell suffered the same fate but chose to make the tissue paper his "object" -- quite brilliantly, in fact, as it stood in for him as lungs, as well as air). The fact that my object did not arrive -- the idea of never arriving -- thus became central to my presentation, written in the same frame of mind I was in when I gave my Harvard talk (see HERE), in which I was feeling a bit depressed about how, frankly, hard it is to keep heterotopian ventures afloat (i.e., BABEL, punctum, Studium, etc.) while the endlessly self-replicating machinery of neoliberal capital is grinding down all of us who aren't trying to monetize everything, who are trying to do something else. Being at the Kalamazoo Congress was energizing for me and personally refreshing (thank you, FRIENDS!), and thanks to intensive conversations and strategy meetings with certain persons (more about which ... later), I feel that "everything will be okay." Even though, most days, it doesn't always feel that way. Hence, my paper: