Another world has always been possible: A Letter to Elysia Crampton @ DIS Magazine 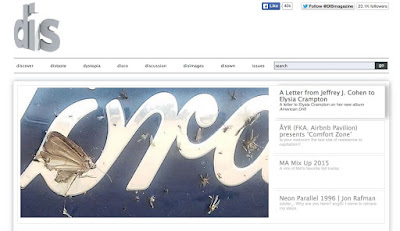 ITM readers may be interested in this collaborative piece now up at DIS Magazine. I wrote it with Elysia Crampton while meditating on her latest album, American Drift (and lyrics from its songs drift throughout the letter I composed). You can read more about her work (including the importance of location, and being trans, and homes and belongings, and using sound as a fabric to create story) in an interview with Spin here and Fact here and Fader here. Elysia and I have been FB friends for a while, I think because we have Drew Daniel's friendship in common. She read my book and sent me a letter about doing something for DIS. I returned her note intercut with my own letter. She sent it back with her letter removed and a story told with images plus a soundtrack replacing her words. And thus the DIS piece. All of this was done by email: Elysia was moving from the Shenandoah to Santa Fe in the Yungas (a town her grandparents founded) and then to her farm in Rosario, Pacajes. I was in New Zealand, far from home.

I think this is my favorite line from what I wrote:
Another world has always been possible. Say fuck it and start.

But you'll see that is only one of many topics considered. Let me know what you think.
Posted by Jeffrey Cohen at 9:45 AM