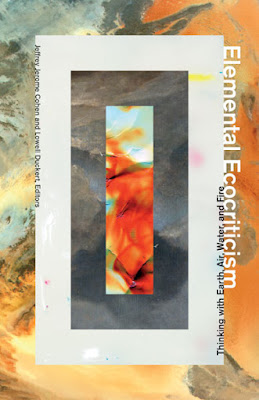 Although its official release date does not arrive until Dec. 23, the University of Minnesota Press is shipping copies of Elemental Ecocriticism: Thinking with Earth, Air, Water, and Fire a little early. I received mine on Thursday, a happy surprise after a very long day.

The elements are never easy. That's the opening line of the introduction, and it seems to have come to me and Lowell simultaneously, or at least indicates that when the two of us wrote together it was quickly difficult to tell one's prose from the other's. That, I think, is a sign of success. Lowell is a wonderful collaborator, and I feel very fortunate to have had the chance to work with him on a second project.

Yet "the elements are never easy" is also not quite right, at least when it comes to the volume itself: the contributors were a delight to work with, from the symposium that Sharon O'Dair organized in Tuscaloosa to the wending of the volume through UMP (and profound thanks go to Richard Morrison, Doug Armato and Erin Warholm-Wohlenhaus for making the press such a welcoming home). An intellectual companion to Prismatic Ecology, Elemental Ecocriticism will be joined in time at UMP by a book to complete this informal ecocritical trilogy, Veer Ecology (also a collaboration with Lowell, this time with 30 contributors). I've published with many presses over the years but my debt to Minnesota is greatest: this is my sixth book on their lists, which seem to get only better over time (e.g. Steve's book, and Allan's book, and ...)

As you'll discover when you read the acknowledgments, the elements and their interstices were assigned by the book's muse, Jane Bennett. She pulled names and elemental assignments from a burrito bowl in Boston in 2012, and thus each author received an element (or a materiality between two elements) to follow. I somehow expected to get something earthy, considering all I was thinking about at the time was stone, but the spirits of the burrito bowl gave me water-earth. I wrote my essay on medieval imaginings of an ocean that flows above the clouds, and the sailors to be glimpsed coursing those waters from time to time. I will place a complete table of contents and book description at the end of this post. I still find it difficult to believe that Lowell and I got so many great writers and thinkers together like this.

If you can afford it, please consider buying a copy of Elemental Ecocriticism for yourself, and asking your institution's library to obtain one as well (if you cannot afford it, and the book would be very helpful to you ... contact me). The University of Minnesota Press is a not-for-profit entity. Most of their titles never recoup the costs of producing them (a team of salaried professionals is behind each book, and that is not inexpensive, but their care is evident on every page). The Press also took a gamble on this one, hoping that it will be read widely and appeal to more than those readers who are already well disposed. Lowell and I are trying hard through this collection to ensure that medieval and early modern studies are vocal, valued contributors to contemporary conversations within the environmental humanities. We won't save the Earth if we discard its long histories. In part that is why we asked Stacy Alaimo, Tim Morton and Cary Wolfe to contribute (but also: we value deeply their scholarship). The book is reasonably priced: $27 for the handsome paperback [$20 on Amazon], with an e-version soon to come (if priced at about the same as Prismatic, EE should cost around $14 for the Kindle). And if you buy the book and hate it, you can hurl it at my head the next time you see me and I will exact no vengeance. I promise.

Elemental Ecocriticism: Thinking with Earth, Air, Water, and Fire
For centuries it was believed that all matter was composed of four elements: earth, air, water, and fire in promiscuous combination, bound by love and pulled apart by strife. Elemental theory offered a mode of understanding materiality that did not center the cosmos around the human. Outgrown as a science, the elements are now what we build our houses against. Their renunciation has fostered only estrangement from the material world.
The essays collected in Elemental Ecocriticism show how elemental materiality precipitates new engagements with the ecological. Here the classical elements reveal the vitality of supposedly inert substances (mud, water, earth, air), chemical processes (fire), and natural phenomena, as well as the promise in the abandoned and the unreal (ether, phlogiston, spontaneous generation).
Decentering the human, this volume provides important correctives to the idea of the material world as mere resource. Three response essays meditate on the connections of this collaborative project to the framing of modern-day ecological concerns. A renewed intimacy with the elemental holds the potential for a more dynamic environmental ethics and the possibility of a reinvigorated materialism.
Contents
Introduction: Eleven Principles of the Elements Jeffrey Jerome Cohen and Lowell Duckert1. Pyromena: Fire’s Doing Anne Harris 2. Phlogiston Steve Mentz3. Airy Something Valerie Allen 4. The Sea Above Jeffrey Jerome Cohen 5. Muddy Thinking Sharon O'Dair6. The Quintessence of Wit Chris Barrett 7. Wet? Julian Yates8. Creeping Things: Spontaneous Generation and Material Creativity Karl Steel 9. Earth’s Prospects Lowell DuckertLove and Strife: Response Essays Elementality Timothy Morton Elemental Relations at the Edge Cary WolfeElemental Love in the Anthropocene Stacy AlaimoCoda: Wandering Elements and Natures to Come Serpil Oppermann and Serenella IovinoAcknowledgments Contributors Index
Posted by Jeffrey Cohen at 1:44 PM