Eternity Machines: Some thoughts on That Dragon Cancer, The Swedish Rök Runestone, and Pearl


Several months ago, I had the opportunity to give a co-lecture on the game That Dragon Cancer. At the time, our teaching team was a little more than midway through our course, entitled "Stories Everywhere," which is designed to introduce Stanford freshmen to crucial critical thinking skills by way (at least in our case) of a series of texts, films, and -- in this case -- games that reflect the ways in which humans seek to make sense of their lived experiences through narrative (this course is part of a series created and run by Stanford's Thinking Matters program). 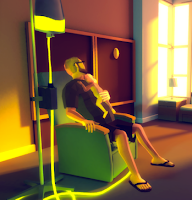 The game is a harrowing one to play, especially if you're particularly sensitive to stories about child illness and loss. It is also a nonfiction/autobiographic narrative. The creators, Ryan and Amy Green, starting working on this game after their son Joel was diagnosed with terminal cancer at 12 months of age. They worked on it throughout the remaining years of Joel's life (he was only expected to live for a few months after the initial diagnosis, but would remarkably go on to live for a little over four more years). It is, at heart, an exploration game -- one that invites you into a series of fourteen vignettes wherein you inhabit either a first or third person perspective. Players are guided from one scene to the next, but the simplicity of its form allows the game to harness degrees of affective power that are all but unmatched in the video game medium. As many reviewers and players have observed, the game invites and requires players to inhabit the role of Joel's parents, experiencing a series of moments that are by turns sweet—helping Joel feed ducks, holding Joel while he sleeps (see image below)—and traumatizing, such as trying and failing to soothe a screaming, terminally sick child in the hospital room. That hospital scene, in fact, was the first vignette that Ryan Green ever created. He wanted to construct a scene that captured and helped explain the despair that a parent feels in those kinds of moments, and also his revelation that sometimes there is simply nothing that you can do. 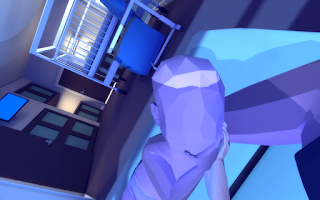 The game is infused with abstract, symbolic imagery that requires you to engage in interpretive, gap-filling work as you move through the narrative. For as linear as it the game is in structure, the story is deeply fragmented -- as a player, you are invited to inhabit critical moments in the story, but you are always aware that there is a significant portion of the story that is being left untold. Compellingly, the faces of all the characters are blank, and this was -- according to Ryan -- both a result of the limitations of the small development team and a deliberate choice. They felt that in leaving the faces undistinguished, it would be easier for others to imagine themselves in the world of the game. It also occurred to me, as I listened to the podcast "The Cathedral" (it provides a goodly amount of backstory on the game's production and on the Greens’ story), played through the game, read additional interviews, and listened to Adam Johnson lecture on the mechanics of trauma narratives in our Stories course, that the creators may well have used abstraction and the vignette structure as a way of deliberately distancing themselves from the story. As Adam pointed out to our students, the telling of a trauma narrative *can* be a cathartic and healing one for the traumatized individual, but only under certain conditions that vary from person to person. The traumatized person, in other words, may feel a strong need to tell their story, but they must do so in a way that does them good instead of harm. Otherwise, story-telling becomes either damaging or downright impossible. The abstraction, symbolic imagery, and even the shifts from first to third person, then, seem to be a way of creating just enough distance so that the creators could bear to tell the story of their son's battle with cancer and his eventual death. How could they have born the creative and development process, in other words, if they had forced themselves to stare at their son's face the entire time?

The motivations for the game evolved as Joel's treatment and prognosis evolved, and in the end (as recounted in the podcast) the family came to see That Dragon Cancer as Joel's memorial. So much so that they decided against purchasing a tombstone for Joel so that they could put that money towards the completion of the game (they were in desperate need of funds to complete it at the time of Joel's passing). They decided that this game was the best way to honor Joel, and so the decision to memorialize him through this creative process (rather than through conventional means) was a natural and seamless one.

Bronwen Tate and I worked on the lecture for several weeks—one that focused on the features of a trauma narrative that unfolds in a video game. I began to draft up our conclusion, I just so happened to stumble upon an article about the Rök stone, a Swedish runestone dating to the 9th century. This stone is nothing short of a marvel, given that the longest found example of runic script is etched upon it, and it has been the subject of considerable interpretive debate since it was found over a century ago. Its text is notoriously difficult to interpret. It begins, as so many runestones do, with a dedication— "In memory of Vämod stand these runes. And Varinn wrote them, the father, in memory of his dead son"—but what follows are a series of impenetrable and oblique riddles that provide anything but a linear recounting of Vämod’s life and deeds. However, Per Holmberg, associate professor of Scandinavian languages at the University of Gothenburg, has offered up a recent interpretation that works against the nationalistic interpretations of the previous century. The whole article – which goes into greater detail on the complicated order in which Holberg thinks the runes ought to be read—is well worth a read, but the closing paragraphs of the piece were especially striking to me as I struggled to find a way to wind our lecture to a close:

If this is the longest rune inscription ever found in stone, it must have taken its author a very long time to carve. Why didn't Varinn spend that time writing a straightforward narrative about how great Vämod was? Were riddles really the best he could think of to memorialize his slain son?
Holmberg laughed.
"That's a very good question," he said.
But here's his theory: "It's thanks to the technology of writing, Varinn, who erected the stone and inscribed it with runes, is able to keep us reading and keep us answering his riddles. And while we are doing this we are almost forced to commemorate his son."
In other words, the stone is a celebration of how words can make someone immortal. A straightforward history of any sort would have placed Vämod and his whole world squarely in the past. But Varinn's riddles have held researchers in their thrall for more than a century — and, since Holmberg's theory is likely to be challenged, probably for many more years to come.
"In Swedish, we have the phrase 'eternity machine,'" Holmberg mused. It's something akin to da Vinci's and Tesla's dream of perpetual motion — a hypothetical machine that would work indefinitely, driven by a power entirely its own.
"This written text is like an eternity machine," he continued. "It keeps us reading. It keeps us commemorating."

This part of the article resonated immediately with my experiences playing and analyzing That Dragon Cancer. Holmberg’s theory – especially his point that deliberately complicated texts force us into the process of memorialization and afford the creators and the memorialized a kind of immortality—seems to me rather indelibly tied to the affective power and the motivations behind the game. Of course this game would have a non-linear narrative, as does the Rök stone. Of course it would be rife with symbolic imagery and disorienting abstraction. Of course the family would come to see it, and not a tombstone, as the best way to memorialize Joel. And so, I offered this in closing to our students: that the game, for all its innovation and seeming “newness” channels and reflects an impulse to memorialize that is quite ancient, an impulse that lies at the heart, perhaps, of human’s desires to tell these kinds of stories -- whether they be a grieving parent in 9th century Sweden, or a grieving parent in the now. In this sense they invite us, as I once wrote of Pearl, into a “strange and beautiful communion with all who have (and all who will) endure painful loss.”

Fast forward to NCS 2017: London, where Randy Schiff gave a fantastic paper on Pearl in one of Kristi Castleberry’s and my Narrative Conduits session. He made a passing, but crucially important, observation that Pearl is—in so many ways—a deliberately difficult/challenging poem, and in that instant I was immediately reminded both of the Rök stone and of this game. I still have a lot of thinking to do on this, but Randy’s comment made me wonder: to what extent might we think of Pearl as a kind of eternity machine? If we ascribe to the theory that it was written by the author in memory of his (or a patron’s) dead child, then to what extent might we understand the luminous complexity of its verse in terms of this very impulse to memorialize? Put differently, to what extent does that luminous complexity and abstraction—that careful balance between affective involvement and constructed distance—serve as evidence that this is a poem inspired by profound (and, as Dan Kline has stressed so beautifully) deeply personal loss? 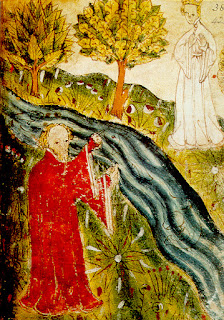