The story I want to tell

By now you have no doubt heard that the National Policy Institute met over the weekend here in DC, where they bragged of being newly emboldened to speak their racist ideology. If you read the New York Times, you might even be excused for thinking that their ebullient hate is situation normal around here these days, the fabric of a changed social landscape where we can marvel at their flourishing but not feel a particular call to action, not intuit that anyone is doing anything about their presence, their statements, or their actions. The article by Joseph Goldstein on November 20 (I won't link to it because I don't want to drive up its popularity but it's easy to find) reports upon their meeting at the Ronald Reagan Building and provides details like:


And so we are told that "these are exultant times for the alt-right movement."

What we are specifically not told in the course of the New York Times article is that
(1) the presence of these white supremacists in Washington DC was met with unremitting protest (an image used to illustrate the article shows the protesters but they appear nowhere in the piece itself: all we get are the words and actions of the "exultant alt-right"); (2) the Hamilton hotel refused to host a meal or meeting for them when they discovered who they are and what they believe (as a government building, the Reagan Center cannot deny them space); (3) when members of the institute went to NW DC to eat together on Friday night, they were followed by the protesters who attempted to rush into the banquet room which these white supremacists had reserved under false pretenses; (4) the restaurant closed immediately and asked the white supremacists to leave when the manager realized who they were (his first thought was for the safety of the multiracial staff).

I want you to note that I am using "white supremacists" throughout this post rather than "alt-right." That latter term is the one these racists prefer for themselves -- as well as the only descriptive term used for them within the New York Times article. Not once does "white supremacist" or "Neo-Nazi" appear in the report ("Nazi" is used only to refer to an "era" that is bygone). The decorative image of the protestors that stands before the actual article shows a man holding a placard that states ALT-RIGHT = NEO-NAZI but Joseph Goldstein does not make that equivalence himself. In other words, the article is so invested in inhabiting the "exultant" world of the "alt-right" that you would never know that their presence was met with protest, counter-discourses, struggle even over terms, and some refuge-making. That side of the story is left to an illustrative picture, if at all.

Through the beckoning of this partial and fascinated gaze, my friends, is how the Donald Trumps of the world win. This is how the racists triumph. They captivate public attention through outrageous spectacle, theatre of hate. They keep the spotlight on themselves so successfully that you would never know there is a crowd just over to the side chanting against white supremacy, or hotels canceling their plans to dine, or a restaurant tricked into serving them realizing its mistake and publicly apologizing in a carefully worded rebuff to everything these people stand for. The story is not the Nazi salutes in the Reagan Building, or the questioning of whether Jews are really people, or the the thousand other tedious racist narratives being placed into intensified circulation -- or at least, such is not the entirety of the story. The protests matter. The refusal to welcome matters. DC was far less helpless, far less placid during their presence than that article implies. I wish Joseph Goldstein had left the room in the Reagan building from which he reports on alt-right exuberance to bear witness to other, more affirmative modes of passion.

Let me offer a more personal story. The restaurant in northwest DC where the white supremacists gathered for their meal is in my neighborhood, about a 15 minute walk from my house. Before the protestors made their way inside the establishment and before its manager realized who these people that his staff were serving really were, those gathered in the restaurant tweeted this image: 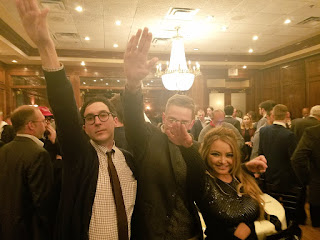 The photo was shared with great outrage on social media. I recognized its setting immediately: the banquet room where almost seven years ago we celebrated our son's bar mitzvah, his coming into his adult Jewish identity. In that space where we had gathered with friends and family to honor a moment of passage that to our grandparents and great-grandparents might have seemed impossible (they were remnants of families that fled to the US for refuge rather than face death simply for being Jewish), in that room where my family had one of the happiest moments we've ever had together, white supremacists extended their arms in Nazi salutes.

Our daughter has chosen the same restaurant for the celebration of her bat mitzvah this coming March. Tonight we are supposed to go there to select the menu. My first thought was to cancel, move the celebration to another venue. Seeing the tweeted image made it feel like something had been taken from us -- and we were not sure at first how the restaurant had responded. But I know there is too much quick action these days, not enough sharing stories to understand who is struggling with you. So I contacted the restaurant's manager and requested some context for what had unfolded. I spoke with him for a long while yesterday morning. His voice cracked as he narrated the events of the evening. Many of those who work at the place are black or Latino, and they had served these people whose values are so hostile to them. They had served people who hate and demean them, and done it without knowing who they were, that their safety might be at stake. The manager told me that the group's reservation had been made without reference to their institute or beliefs; they had simply called it a family reunion. That he had enabled them to gather at a place he is in charge of keeping safe profoundly troubled him. We had a good talk ... but I told him I needed more than a good talk or his personal remorse to restore my confidence. I needed some affirmation of what his establishment stands for, something that makes it clear that the group inadvertently hosted was not and never will be welcomed. Later that day I was contacted by the company's VP of Operations in Dallas. She apologized for what had unfolded, again stating that had they known, they would never had allowed white supremacists to use their establishment. She read me the public apology that was about to be released -- and it covered almost everything I could want (we quibbled about mentioning the protestors as the statement did; I pointed out that what occurred was not about them, even if they had triggered safety concerns; they would not have been there had Neo-Nazis not been eating inside). Maggiano's also donated significantly more than the profits they had earned that evening to the Anti-Defamation League. Their $10,000 to support an organization inimical to white supremacists seemed right.

That is the story I want to tell. Too many narratives marvel at the theatricality of hate. Let's have stories of the challenge such hate receives, of the challenge that must be amplified if we are ever to get through the next four years. Unlike the New York Times, I will not adopt the anodyne terms like "alt-right" that these racists christen themselves with. I do not want to inhabit a room with a reporter as he watches white supremacists exult. I want to be outside with the protestors. Rather than dwell within the Reagan Building, which had to host their event, I want to stand with the Hamilton hotel, which refused them welcome. Even if the only way to get this story is by telephoning them myself, I want to hear of the restaurant that when tricked by these white supremacists donated all their money and more to an organization dedicated to diminishing their power.

Our daughter has decided that her bat mitzvah celebration will be held in that restaurant as planned. I will no doubt think at some point about that image of the Nazi salute in a space of family happiness that day, just as I am doing now. Yet I also know that our daughter, having chanted her Torah portion and achieved something that during these long days of tutoring and hard work at Hebrew sometimes seems impossible, will be dancing with her friends, inviting us all into her community, making it impossible not to share her joy.
Posted by Jeffrey Cohen at 11:30 AM

Jeffrey, thanks for sharing such a personal story. It's nice to hear that the restaurant is making a statement. Just curious: did you write to the Times about the article?

Jeffrey, thanks for sharing this, both your own very personal story and the fact that these...people...were in fact not welcomed or normalized, but were protested and repudiated at every turn.

I'm saying all over the place "We need to change the narratives." Thank you for such a cogent explanation of how and why. This helps.

While I understand your argument here, and I agree that the vigorous protests that the white supremacists' meeting in D.C. provoked should not be ignored, the fact remains that this group felt sufficiently emboldened by Donald Trump's election to hold a very public celebration in this nation's capital of their views and of the fact that, at least as far as they are concerned, they will have a friend in the White House as of next January 20th.

It is certainly heartening that the API meeting was met with such vigorous protests and that the restaurant where they held their banquet made a donation to the ADL after they discovered the true nature of the organization. However, none of this alters the fact that Donald Trump was well-known before the election to be the preferred choice of both the Ku Klux Klan and the American Nazi Party and that, regardless of that fact, enough people voted for him on November 8th to grant him more than 270 Electoral College votes.
The fruit of this is seen in the confidence displayed by neo-Nazi groups such as the American Policy Institute as they give the Nazi salute in the nation's capital and I worry that focusing too much on those who protest against them risks blunting our recognition of the full implications of Donald Trump's election as President of the United States.
Ann Higgins

Thank you for your post. I have been an intermittent follower for some time, and very much appreciate the perspective offered on In The Middle. Do you ever allow guest bloggers? I have a blog with the title Can Medieval Apocalypse Commentaries Help Us Feel Better About the Election? that might fit well with the kind of work that appears on your blog. (I'm not usually inspired to be a public voice, but, well, new times call for new voices).