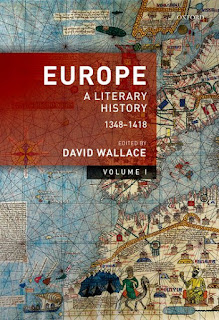 Read and enjoy the interview in its entirety here.
Posted by Jeffrey Cohen at 12:40 PM

Wow. Just wow. This convinces me even more that we need to have an interdisciplinary talk. Many of the texts that Wallace mentions are things that have been used by medieval historians for years, when teaching the MA. They are regularly included in the medieval sections of World History textbooks and sourcebooks -- included by historians whose specialty is the MA. The conceptual stuff he discusses, including understanding and critiquing the role of the 19th C, and the emphases he decries as dying out, are alive and well, practiced by medieval historians -- especially those working on the early MA. They have been doing so since well before I got my PhD.