(From the ongoing project Noah's Arkive: Towards an Ecology of Refuge, by Jeffrey Cohen and Julian Yates) 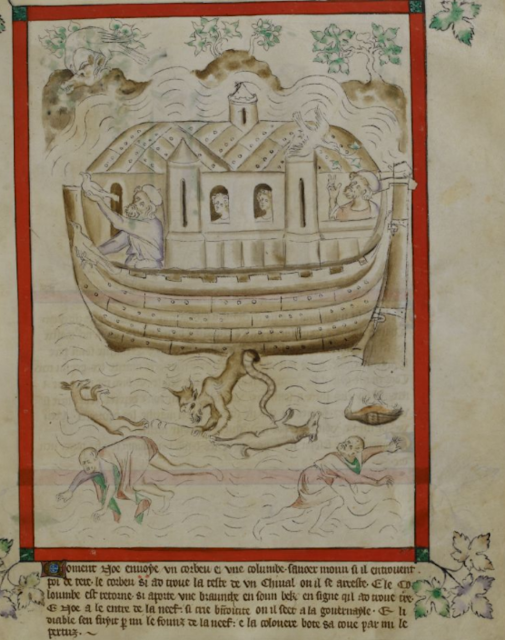 This story is about waywardness, about being peripheral to the story and making the best of it, finding yourself unable or unwilling to participate in expected conclusions. A satisfying ending is built upon the casting away as jetsam the alternatives, the tales full of challenge that cannot culminate in the desired destination, that might even wreck the narrative ship. The Queen Mary Psalter (BL Royal MS 2 B VII, c.1310-1320) offers one of our favorite multiplications of narrative trajectory within a visualization of the seabound ark. The obedient lines (beginnings to ends) upon which closure depends are disrupted by errant spirals, metaphors with unexpected transport, a proliferation of alternative plots. Aboard the vessel that should be the focal point Noah appears twice. On the left he stands on the deck grasping two birds, a svelte dove and bulky raven [une columbe and un corbeu, as the Anglo-Norman text reads underneath]. Both birds look forwards and upwards with him, the trio filled with a shared expectancy of something better to come, some landing or event that will at last enable the voyage to terminate. On the right Noah appears within an ark window, leaning out with upraised hand for a bird’s return. Time has elapsed. The ship’s enormous rudder looms to his side, suggesting counterintuitively that this toy of the waters can be steered, leaving open the question of control and destination. The dove is now winging its way back to Noah’s waiting hand, the expected olive branch clasped in its little beak. The raven meanwhile has decided to go off plot, to ignore Noah’s demands and satisfy its own creaturely appetites. The bird curves into the snug bend of the upper left corner, king of an island where leaves that should have been plucked and returned to Noah sprout luxuriantly. The raven is too busy to note the demands of its mission. It plunges its beak deep into the eye of horse’s head awash on this emerging shore. Given the sweet life that the raven can make for itself in the flotsam of the deluge, why would the bird return? 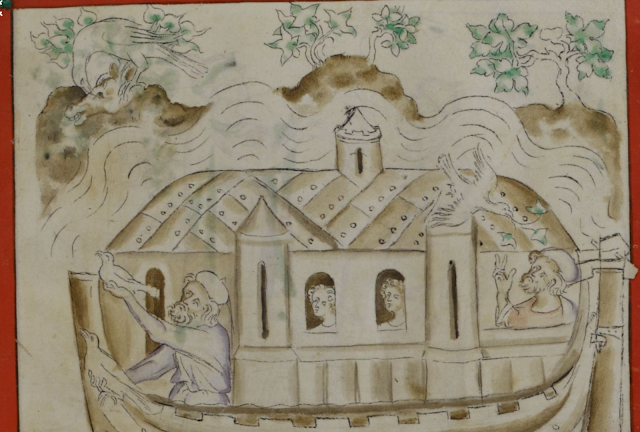 Two trajectories then: the dove’s forth and back that enable movement towards completion of the narrative arc; and the raven’s veering into a space of no returns, a disaster born paradise that provides everything it needs but nothing to trigger return (it will certainly not be winging back with chunks of scavenged flesh). The actions of the dove are fully part of the biblical narrative; the raven’s fate is never there narrated. Yet by the early fourteenth century a long history existed of depicting the raven’s delight in the eyes of the dead; these illustrations possess no textual authority. The raven is an actor who has gone off script, but has done it so long that its story has become a supplemental reality: it would be strange at this point in history to depict a raven who had not found a feast, as if the dove had never grabbed an olive branch. The two birds work together, parallel but asymmetric. The ark and its many passengers are metaphorically all doves: they know where they are going and they are eager to get there and for the rainbow to shine. Genesis attests as much. But this psalter image is as full of corvid tarrying as dovish destination, fated denouement abandoned for dangerous attunement to the mess of the world. Immediately under the ark animal corpses float on a transparent sea, unmoored from gravity, whirled with arresting tranquility. Among these dead beasts is a brightly painted bird, upside down and drowned, a reminder that the dove and raven had kin not admitted to the shelter that they enjoyed. Perhaps that is why the dove is so obedient: it realizes with gratitude the magnitude of Noah’s choice, the unlikelihood of its having been among the conserved. Perhaps that is why the raven is errant: it realizes the price of salvation, the legions denied accommodation so that the pairs could be housed. Meanwhile two men swim in the water, not yet become the carrion into which their animal companions have been transformed. Although far from at ease, the pair do not seem especially distressed. Nor with their brightly slashed and striped clothing and carefully coiffed hair are they in the least bit generic: the figures seem to convey particular persons rather than universal sinful humanity. They are unexpectedly alive in a place of death. Their presence cannot help but to recall the illustration of the loading the ark on a previous folio, where father Noah is forcibly carrying up the ladder into the ship a son who kicks and looks back at his family and the animals still outside. 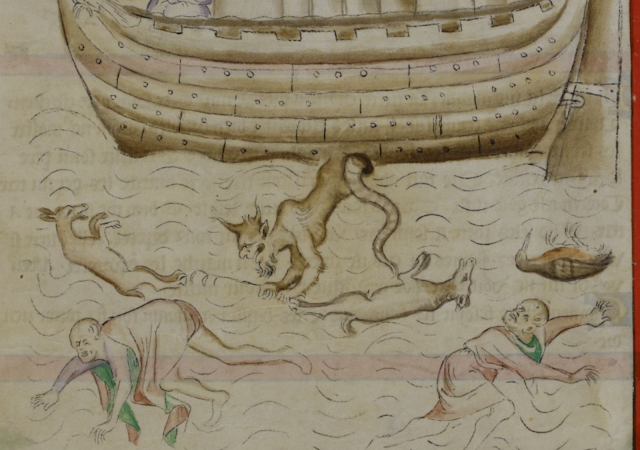 It is strange to see living people outside the ark this late in the Flood, since the rains have ceased and the boat is hurrying towards its mountaintop. No intimation is given that this day is the two men’s last, and yet how can it not be so? The ark is limned by suffering to come, even as the waters recede. But that is not all. Directly beneath the boat, the devil is emerging from a hole, drill in hand. Now that the story of the ark is coming to its close le diable is swimming to freedom, intent on ensuring that the world will never lack the unruly plots to which he dedicates himself, the deviant stories of sex and sin that caused the Flood’s arrival in the first place. We knew this escape was coming from an earlier illustration, back when the ark is being built by an axe-armed Noah. The devil in the unconvincing form of a man convinces Mrs. Noah to assist him in stowing away. She plies her husband with wine and finds a means (6r). Now, the voyage nearly complete and the dove and raven having been released, we can see the devil departing under water, through the bottom of the boat. The tail of a snake has been pulled through the hole that the devil has fashioned, the poor creature become an unwitting plug so that the ship does not sink. Strange to think that the devil cares for those on board, but stranger still to think of a devil who would want a world not sufficiently stocked with a diversity of actors for the dramas that he stages. We do not know the precise origin of the story of Satan secretly sheltered aboard the ark, but it is hard not to see it told in part to explain why the world should be just as wicked after the deluge as ever it was. Perhaps too this stowaway tale conveys a desire not to leave one of the most interesting characters in Christian biblical storytelling to drown. Their eyes forever gazing heavenward, Noah and his dove are oblivious to what unfolds in the waters. The devil, the carrion, and the swimming figures are all part of the raven’s world, a space which once noticed disturbs perspective and trajectory, replete with suffering but also thrumming with life. Denouement gets postponed in the process, the repeopling of the world traded for an embrace of being at sea. For a while.
The ages long trajectory of Noah’s ark, rudder forcibly set in the direction of Ararat and rainbow, has been constantly disrupted by the raven and his kin.
Posted by Jeffrey Cohen at 10:09 AM