A Graduate Student in the (Farmers') Marketplace of Ideas

Every Saturday morning in summer 2019, from 8 AM-12:30 PM, I sat twenty feet away from white supremacists selling vegetables. As the founder and lead organizer of No Space for Hate (NSFH), an organization that seeks to counter white supremacist recruitment and organizing in the local community, I challenge, on a daily basis, community and local government toleration of white supremacy in my community of Bloomington, Indiana. Our organization employs multiple tactics on multiple fronts, encompassing policy changes, educational workshops, direct action, collaborations with local food pantries, and more. Besides my activism, I study insects in 12th to 15th century literature, focusing specifically on insect-human encounters through critical animal studies lenses. I’m working on my second chapter. To add to the conversation about what it means to be a public facing medievalist who is also Asian American, I offer my perspective as a graduate student who has been involved in extremely dangerous and intense anti-racist work. This blog post is about being a graduate student, a medievalist, and an activist in my local community. I discuss the importance of academic engagement in social justice causes outside the academy, and challenge its members to support graduate students as they do dangerous, anti-racist work outside the academy, and not just inside it.

Nazis at the Farmers' Market
In May 2019, local activists revealed that Sarah Dye and Doug Mackey of Schooner Creek Farm were members of the American Identity Movement (AmIM), formerly known as Identity Evropa. Despite initial denials (they’re not Nazis, they’re identitarians), the farmers confirmed in August that they were indeed members of AmIM. City government professed an inability to deplatform them from the market, claiming that white supremacy was a matter of belief, rather than actions. Since I mobilized the community in response to the news that they were white supremacists, the Bloomington, Indiana Farmers’ Market—the main site for their business—has become a hotbed of “controversy.” Sarah Dye granted multiple RedIceTV interviews and used her farm’s Facebook page to disseminate propaganda, invited AmIM president Patrick Casey to the market, collected local armed Three Percenters to support the cause, and staffed her stall with a rotating array of violent white supremacist organizers.

As the founder and facilitator of the NSFH movement, I’ve been extremely visible and in the forefront of the fight against normalizing white supremacy in Bloomington and increasingly beyond it. Because I have been so public and so visible, I’ve been featured in all of Sarah Dye’s RedIceTv interviews, with all of the ensuing calls to violence. My picture has been posted on-line and in the community, alongside racial slurs. National Vanguard, a neo-nazi group called me a full-time anti-white activist and a non-Jewish front for Jewish groups. A group called “Hoosier Anti-Antifa” circulated a call on Facebook to get me deported. I’ve gotten death threats over email. The Youtube comments on the RedIceTV page, not to mention the Schooner Creek Farm page itself, always post death threats. I regularly learn a fascinating array of creative ways to be murdered. I’ve had to shut down my Twitter account.

To a certain extent, none of that is surprising or new, as the constant white supremacist backlash to recent moves in medieval studies has shown. I’ve been lucky to have the support of my department as I navigate these threats. However, I was and am surprised by the silence from many academic communities and from scholars who have job security - both at Indiana University and at other institutions. I am surprised by their fear of venturing any public support, based on their desire not to attract white supremacist attention, opting rather to have the brunt of white supremacist hostility fall on me and other public-facing activists of color disproportionately. I am surprised by the constant claims from inside the academy that Sarah Dye was too attractive, too nice, too normal to be the face of white supremacy. In fact, some faculty have been openly hostile. But while I write my dissertation, teach my classes, and go to conferences, I continue to show up at the Bloomington, Indiana Farmers’ Market every Saturday morning to challenge the acceptance of white supremacists in our community. This uncompensated labor is an indescribable burden. Indiana University-Bloomington has one of the lowest stipends for graduate students in the humanities in the country, leading my colleagues to organize around issues of working conditions.

Town/Gown Connections
I admire how many medievalists advocate engaging the public through social media and in the comments of news articles. My priority, in addition to working on the ground to defend my local community from white supremacists, is training new activists for in-person work. Being a member of an academic institution means also being a member of the community in which it is located. Getting involved in local activism is a way to avoid the town/gown division. Activism in the Midwest, something that folks in Bloomington view as one of the strongholds of the Klan, involves cultivating a lot of well-meaning white people into becoming better allies. Related to the legacy of the Klan activity in Bloomington, overtly racist actions are not a new feature in Bloomington, either: I recently learned that a market and cultural center founded by black student activist Rollo Turner was firebombed by the Klan in 1968, and that there has been nothing of its type in the city since. Members of No Space for Hate, most of which were grad students, initiated a program called CRiSP, which helps connect leftover produce from Saturday farmers’ market sales to food pantries. We’re proud to help support one of the only food pantries in the area, Pantry 279, that comes up with creative ways to help people who would otherwise slip through the cracks of bureaucracy. Unlike the Salvation Army, they do not require birth certificates or citizenship paperwork to help families with holiday gift-giving, and are therefore better able to serve undocumented immigrants, families escaping domestic abuse situations, or anyone who doesn’t have the “right” papers. We’ve fundraised for local indigenous communities and immigration causes. In a predominantly white community, I am helping my friends establish a market for and by people of color.

These material actions have facilitated countless positive community connections and activism. Seeing what can be accomplished by facilitating these connections, I thus advocate for meeting people where they are, with compassion and empathy. It is important to recognize my tactics as both a personal choice and also one that’s born out of precarity. I cannot afford to look “uncivil” as a graduate student, but that does not stop the accusations of incivility. Beyond my lack of “civility,” I have been accused of carrying coronavirus and have undergone threats of deportation. I have been told that I will never get a job in academia. I have been made to feel as though I have to give up those dreams and make a choice between academia and anti-racist activism.

Fighting Nazis in Indiana/in the Midwest/in a former stronghold of the KKK that is still predominantly white has taught me that the work of combating white supremacy involves real generosity of spirit: of meeting people where they are, of including as many diverse perspectives as possible, of the value of incremental change, of collaboration rather than dictatorship, of building rather than burning, of long, sustained progress, of forming unlikely alliances, of doing the behind-the-scenes work and labor that doesn't "happen" on social media. Week after week, I sit twenty feet away from Nazis in refusal to normalize their presence in my community, but I also congregate with people that I would never imagine could sit in the same room together. I do this in order to build deep,  often painful but productive connections with individuals who would have never envisioned themselves equipped to do anti-racist work.

There’s a cost. It’s impossible to understate the toll it’s taken on my personal and intellectual life. There are no rewards or accolades for my bravery. I have lost my health, my friendships, my relationships, and job opportunities. We’ve seen how many senior scholars in the community exhibit some ugly flexing towards graduate students. There’s a difference doing this highly intense and potentially violent (for me) anti-racist work as a graduate student in Indiana, and not as a tenure-track or tenured professor. Therefore, I ask: How do we support graduate students as they do dangerous, anti-racist work outside the academy, and not just inside it—work that incurs real dangers but also cultivates town-gown relationships and communities? How do we empower them to do very visible and public anti-racist work while doing research, teaching, and trying to pay the rent? For me, who has been told to “stop organizing around white supremacy,” keeping silent is not an acceptable answer. What kinds of public support can academics who have job security, better health insurance, and higher salaries than a grad student stipend, provide to graduate students of color who have chosen to stick their necks out to protect their communities? What kinds of public statements of support? What kinds of intellectual resources can or should be brought to bear on outreach about the issue? What kinds of material options exist for support?

These are urgent questions. While we consider them, I will be helping other artisans and community members of color in Bloomington build a market that models values of inclusivity and belonging while working towards racial justice. I urge you to join me.

Please consider subscribing to my Patreon. 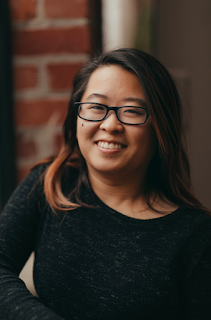 Abby Ang is the founder and lead organizer of No Space for Hate, a coalition of community members who confront and expose local white supremacist activities through education, direct action, and community building. She co-organizes an Indiana chapter of National Asian Pacific American Women's Forum, and is the vice president of Monroe County National Organization for Women.

An alum of Providence College, Abby moved to Bloomington 7 years ago to attend Indiana University as a full time PhD Candidate in the Department of English. She is working on a dissertation focusing on 12th-15th century human-insect encounters across medieval literary genres through ecocritical and animal studies lenses. In recognition of her public service, Indiana University awarded her with the Martin Luther King Jr. Building Bridges Award (2018) and the John H. Edwards Fellowship (2018-2019).

Thanks for doing everything you do.

Right on, sister! Power to those who give a d**n. People with open-minds and open-hearts used to flock to Bloomington because it used to be a safe-haven for people to escape their small-town attitudes towards homophobia, racism, sexism, etc. Now, more and more, Bloomington has turned into this capitalistic, egotistical, faux-liberal environment with ultra-conservative right-wing views. We don't have a democratic mayor who ensures ways to protect its citizens. Also, I was told that a "Board" doesn't have the power to instill policy changes on this level, but that it is up to the city council to change rules and regulations. I want the old Bloomington back! Extract the mayor!