Now in print: Ashgate Research Companion to Monsters and the Monstrous 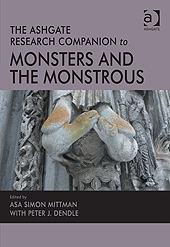 Warm congratulations to Asa Simon Mittman and Peter Dendle on the publication of their massive Ashgate Research Companion to Monsters and the Monstrous. You will recognize many of the contributors (John Block Friedman! Dana Oswald! Debra Higgs Strickland! the illustrious Karl Steel! and many more!) The temporal and geographical scope of this 598 page beast is vast.

The postscript is by yours truly: "The Promise of Monsters" project that appeared in draft on the blog not all that long ago.

Press blurb and endorsements are below, as well as the ToC. Go to the Ashgate website to view extracts; there's a discount if you place your order there. Don't forget to buy some extra copies as they make fine gifts for unexpected houseguests -- and, in the event of an actual zombie apocalypse the book may be dropped from great heights as an effective weapon or burned as long lasting source of warmth.


The field of monster studies has grown significantly over the past few years and this companion provides a comprehensive guide to the study of monsters and the monstrous from historical, regional and thematic perspectives. The collection reflects the truly multi-disciplinary nature of monster studies, bringing in scholars from literature, art history, religious studies, history, classics, and cultural and media studies. The companion will offer scholars and graduate students the first comprehensive and authoritative review of this emergent field.

Reviews:
'This volume awakens the monster as an academic topic. Combining John Block Friedman's historical-literary approach with Jeffrey J. Cohen's theoretical concerns, Asa Simon Mittman and Peter Dendle have marshaled chapters that comprise a seminal work for everyone interested in the monstrous. Wide-ranging chapters work through various historical and geographic views of monstrosity, from the African Mami Wata to Pokemon. Theoretical chapters consider contemporary views of what a monster is and why we care about them as we do. Taken together, the essays in The Ashgate Research Companion to Monsters and the Monstrous reveal that monsters appear in every culture and haunt each of us in different ways, or as Mittman says, the monstrous calls into question our (their, anyone's) epistemological worldview, highlights its fragmentary and inadequate nature, and thereby asks us … to acknowledge the failures of our systems of categorization.'
David Sprunger, Concordia College, Minnesota, USA

'An impressively broad and thoughtful collection of the ways in which many cultures, ancient and modern, have used monsters to think about what it means to be human. Lavishly illustrated and ambitious in scope, this book enlarges the reader's imagination.'
Professor Lorraine Daston, Director of the Max Planck Institute for the History of Science, Germany

Posted by Jeffrey Cohen at 7:02 PM