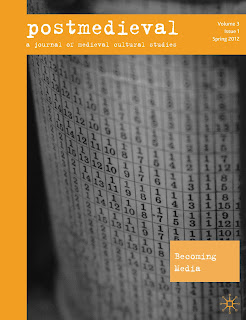 
"The in-between of media and mediation is as much a historical investment as it is a phenomenological and ontological problem. On the one hand, the ‘new’ in our refrain of ‘new media’ betrays the uncritical assumption that media can appear from the ether as novel innovations unfettered by their remediations in and through the past. On the other, there is a tendency to reify the media object as a ‘lure’ to ‘demonstrating its past’; that is, media objects lure us toward an archeology of their present that is rooted in a chronology of progressive succession. What of historically abject media, of the object resistant entirely to a telos of mediation ‘for’ …?"
--Jen Boyle and Martin Foys, "Becoming Media"


Shape invokes a model that is as much descriptive as it is evaluative; a model that does not exclude the work of mediation. Though not designed specifically for academic production, the in-progress internet evaluation system, Hypothes.is, offers a future example of such a model: a system of platforms that make transparent how categories of evaluation (“domain experts”; “merit”) form up in direct relationship to their emergent and constitutive judgments of content. This would require a limited departure from the exclusive emphasis on individual reputation and isolated evaluative judgment within thought communities. This model will work only if we can embody dissensus as a shape that does not necessarily have to become a discrete judgment. It also requires attention to how things help constitute thought as a category. How might we include the determinative influence of interface design, network nodes, and blog correspondence as real actants in the process and development of the meaning and value of communicated thought?
--Jen Boyle, "In the Shape of a Crowd," postmedieval FORUM II: "The State(s) of Review"

As is typical of me, I am excited -- EXCITED, I tell you!!! -- to announce that the special issue of postmedieval on "Becoming Media," co-edited by Jen Boyle and Martin Foys, is now available online and in print, and DON'T FORGET: for the month of March, ALL content of ALL Palgrave journals is FREE [yes, FREE, FREE, I tell you]:

We're thrilled as well that there is also a special dynamic digital version of Whitney Trettien's essay in the issue, and you can see that here:

And if that were not enough [and it is not, it is NOT, I say], Holly Crocker has also unveiled today our second postmedieval FORUM on "The State(s) of Review," which was partly prompted by postmedieval's experiment with the crowd review of the "Becoming Media" issue last summer and features lively and provocative commentary by Jen Boyle, Holly, Martin Foys, myself, Sharon O'Dair, Katherine Rowe, Sarah Werner, and Bonnie Wheeler. This is an open forum, and we are hoping that you will share with us comments and reactions to any or all of the pieces there:


FORUM II: The State(s) of Review


"Does it really matter if you gather these flowers from a crowd or an individual reader? Preprint will become our norm in the humanities; collectively written essays will flourish; new technologies will continue to beget new modes of scholarly production. In a positive sense, peer review in some form will remain because scholarship is a constantly evolving conversation in which judgments are rendered. In a practical sense, as long as we have tenure committees and intense specializations, we will need to accrue every possible form of peer review. It is better to get trenchant private and/or public readings early in the process rather than the week before tenure review. If you go the way of crowd review, just remember you also must be wily: prime your e-pump (what else are friends for?) to get things rolling. Insist that your Editors perfect a system of e-erasure."