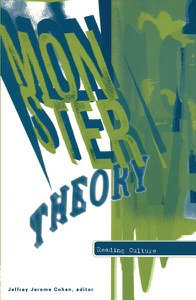 I'm not sure how he stumbled across it, but Asa Mittman posted on Facebook a link to "Monster Culture (Seven Theses) by Jeffrey Jerome Cohen, Revised for 7th grade by Mrs. Kibbie." Mrs. Kibbie, whoever you are, I want you to know that you are kind of awesome. I wish you had been my seventh grade teacher.* The web is full of versions of the MC:7T essay, mostly reduced into bullets as part of study guides students offer to each other, or available in digested form from term paper mills. But Mrs. Kibbie's version, unlike most of these reductions, simplifies the essay without dumbing it down. She also takes the piece is some good new directions through some connections of her own.

I mentioned in the comments to Jonathan's post that I'm kind of embarrassed to have "Monster Culture" so widely read in composition classes. I composed that teratological manifesto in 1993, making it several years older than its audience. It's juvenilia. I was 28 when I wrote it, and OK, that's middle aged at most points in human history but not in an academic career. At that point in my life I'd finished a mainly philological PhD thesis that felt like lonely work, and was attempting (as I labored in a NTT job) to imagine a field larger than the one I found myself within. Thus my idea for a collection of essays on the topic of monsters throughout All of Human History. Ah, to be 28 again.

The writing style of "Monster Culture" strikes me now as a stilted, overly referential, and too enamored of its own sonorousness. My authorial voice has evolved over the years, and it doesn't sound much like MC:7T. It bothers me a little that the essay would be used in so many writing classes because it isn't the most lucid writing I've done. But, on the positive side, it was an experiment that went right, triggering the conversation for which I'd been yearning. It is also cheering that many students who read the essay contact me via email, FB or Twitter and let me know what projects the piece has spurred. A text wants to be read.

So, thank you Mrs Kibbie, whoever you are, for keeping "Monster Culture" alive. Your act of loving translation has made my day.


*Though I doubt Mrs Kibbie would want me to have been her seventh grade student. I persecuted Ms Dente, who was on a perpetual diet, by repeatedly placing an atomic fireball candy in her morning coffee. I believe this is how a 13 year old expresses a crush.
Posted by Jeffrey Cohen at 9:02 AM

I read this post after finishing two articles from the December 2012 edition of the Literature Compass (Special Issue: ‘E-medieval: Teaching, Research, and the Net’). What stuck me was how easily social media and socially linked ebooks fit in as monsters, especially from the perspective of the academic world. The technologies present both the promise of connection, convenience, advancement, and the threat of the unknown and unmoderated, uncurated, unofficial. Digital academia is often hybrid beast that exists in a space otherwise dominated by leisure pursuits. The academic blogger is in a world straddling the free time of the reader and the professional interests of the academic. The availability of ebooks, scanned text versions, and other downloadables force us to question the standards, the codes, the formulas we have previously relied upon to assure ourselves what we are reading is a quality academic product.
I will continue to think on what the many critiques-and praises - of ebooks and social media say about our own culture (such are well represented in the first few pages of "Vain and Superstitious Habits: On Books and their Future in the University after Books" By Stephen Kelly in the special issue ) . Thank you. It was great food for thought. (Written via iPad)

I can see why you dislike the style of the writing in the original article, but I still love it. If it wasn't "overreferential" it wouldn't be monstrous! I'm writing a paper now connecting your concept of the monster to Deleuze and Guattari's concept of rhizome, and it fits perfectly.

As for this awesome edit of the article, I'm going to read it with my 10th graders before doing a couple Poe stories and have them write an analysis using one of the theses. Can't wait! Thanks for the original and for this great link as well!!

Not only is Mrs. Kibbie amazing, but her 7th grade class must be pretty awesome too. Imagine what these students will be writing when they get to college if they are thinking about Monster Theory now. LOVE Jeffrey Cohen and LOVE Mrs. Kibbie both.