Be Careful on the Runway: ON STYLE: AN ATELIER 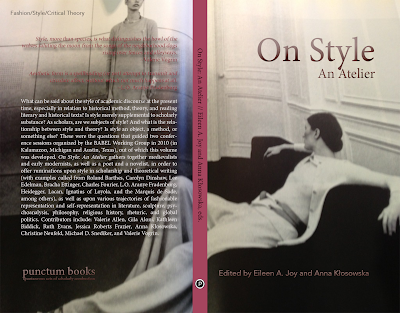 
Style, more than species, is what distinguishes the howl of the wolves saluting the moon from the songs of the neighborhood dogs rising over fences and alleyways.
~Valerie Vogrin

Aesthetic form is a spellbinding (or not) attempt to transmit and circulate affect, without which not much happens at all.
~L.O. Aranye Fradenburg

I am THRILLED to announce today that we have finally published ON STYLE: AN ATELIER, edited by myself and Anna Klosowska, with the assistance of Mon. Sparkles Joy [who may be the first Papillon to be listed as an assistant editor on an academic book, but he IS an expert on fashion, after all: Ask Mon. Sparkles Joy]. The volume comprises essays presented on two linked panels that addressed the intersections between scholarship and style, co-organized by Anne Clark Bartlett and myself, at the 2010 International Medieval Congress in Kalamazoo, Michigan and the first meeting of the BABEL Working Group in Austin, Texas in 2010. Contributors include: Valerie Allen, Gila Aloni, Kathleen Biddick, Ruth Evans, Jessica Roberts Frazier, Anna Klosowska, Christine Neufeld, Michael Snediker, and Valerie Vogrin.

PLEASE REMEMBER that all punctum books are open-access and free to download [and are also available in handsome print editions], and that open access is NEVER EVER NEVER free. So much uncompensated time and labor goes into each punctum volume, and I urge you to understand that open-access initiatives cannot and will not thrive unless all of us recognize our responsibility to help make that the case. When you go to download the book there is a pop-up window that asks you to consider making a donation to the press. PLEASE DO. Do not send me flowers or chocolates or diamonds for the holidays, although I love getting those from all of you each year. Instead, please help me make my dreams come true by donating something, no matter how small, to punctum books.

I will share with everyone here my short Preface to the book, and also Anna Klosowska's delicious "Reader's Guide":

On Style: A Prefatory Note

Scholarship in medieval studies of the past 20 or so years has offered some provocative experiments in, and elegant exempla of, style. Medievalists such as Anne Clark Bartlett, Kathleen Biddick, Catherine Brown, Brantley Bryant, Michael Camille, Jeffrey Jerome Cohen, Carolyn Dinshaw, James Earl, L.O. Aranye Fradenburg, Roberta Frank, Amy Hollywood, Cary Howie, C. Stephen Jaeger, Eileen Joy, Anna Kłosowska, Nicola Masciandaro, Peggy McCracken, Paul Strohm, David Wallace, and Paul Zumthor, among others, have blended the conventions of academic writing with those of fiction, drama, memoir, comedy, polemic, and lyricism, and/or have developed what some would describe as elegant, and arresting (and in some cases, deliciously difficult) prose styles. As these registers merge, they can produce what has been called a queer historiographical encounter (or in queer theorist Elizabeth Freeman’s terms, “an erotohistoriography”), a “poetics of intensification,” and even a “new aestheticism.” The work of some of these scholars has also opened up debates (some rancorous) that often install what the editors of this volume feel are false binaries between form and content, feeling and thinking, affect and rigor, poetry and history, attachment and critical distance, enjoyment and discipline, style and substance.

In his essay, “The Application of Thought to Medieval Studies: The Twenty-First Century”—Exemplaria 22.1 (2010): 85–94—D. Vance Smith worries that some medieval scholars’ desire for “relevance has come at a cost of a creeping anti-intellectualism,” and in the work of certain scholars, such as Carolyn Dinshaw in her book Getting Medieval (1999), who are interested, especially, in self-reflexivity, affect, and the haptic, Smith worries further that, although Dinshaw’s work possesses scholarly “rigor,” its style and method is ultimately “inimitable” (because a “scrupulous adherence” to its call for the importance of incommensurability would render imitation impossible, as if that would be the point of following in Dinshaw’s footsteps, anyway). What Smith is really concerned about, it appears (from this essay, anyway) is that “the danger of valuing affect so highly is that doing so attributes to it an epistemological and even ontological difference so radical as to exclude other categories of representation—that is, to deny these other categories the difference necessary to their work of identification and representation.” And further, “the installment of affect as an historiographical mode” might even be “insidious,” a product, ultimately, of our own “self-interest” and “narcissism.” But who says this is exactly the case—that affect’s epistemological and ontological difference is so “radical” that it excludes other categories of representation? Certainly not Dinshaw, nor, really, any of us who work on affect, the haptic, queer historiographical modes, etc. And regardless, as Anna Kłosowska writes in her contribution to this volume,


The question of style, as it applies to medieval studies, is precisely the overcoming of that dichotomy between Nature and Man: a third element. And when the critique proceeds through the denunciation of the inimitability of someone’s style, as if it were the third sex, ungenerative, queer, sterile, sodomitic, lesbian, etc., the critic unconsciously puts his finger on exactly what style is; but that critic is mistaken about the style’s supposedly non-generative powers. In fact, style, neither fact nor theory but facilitating the transition between the two, is . . . the generative principle itself.

Ultimately, the question of style—and isn’t affect itself a style, a mode, or mood, a way of inhabiting and moving, artfully and creatively, through the world, of sensing one’s, or anyone’s, place at any given moment in a way that helps us to thrive (and we’re to be on our guard against this)?—asks us to consider the ways in which, as much as one might want to insist otherwise, everything is hopelessly (and yet somehow also marvellously) entangled: self and Other, sense and articulation, form and content, personal self and scholarly self, observer and observed, past and present, and so on.

What, then, can be said about the ‘style’ of academic discourse at the present time, especially in relation to historical method, theory, and reading literary and historical texts, especially within premodern studies? Is style merely supplemental to scholarly (so-called) substance? As scholars, are we subjects of style? And what is the relationship between style and theory? Is style an object, a method, or something else? These were the questions that guided two conference sessions initially instigated by Anne Clark Bartlett and organized by the BABEL Working Group in 2010 (in Kalamazoo, Michigan and Austin, Texas), out of which this volume was developed.

On Style: An Atelier gathers together medievalists and early modernists, as well as a poet and a novelist, in order to offer ruminations upon style in scholarship and theoretical writing (with exempla culled from Roland Barthes, Carolyn Dinshaw, Lee Edelman, Bracha Ettinger, Charles Fourier, L.O. Aranye Fradenburg, Heidegger, Lacan, Ignatius of Loyola, and the Marquis de Sade, among others), as well as upon various trajectories of fashionable representation and self-representation in literature, sculpture, psychoanalysis, philosophy, religious history, rhetoric, and global politics. As you are reading this volume and dwelling in its atelier, please remember to wear your tenses lightly and to always, always, be fierce.

On Style
A Reader’s Guide