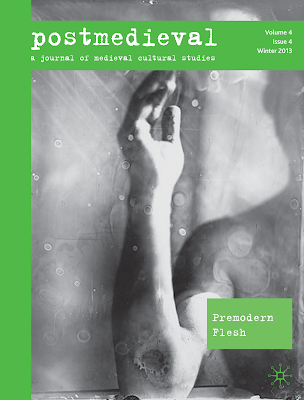 
There is a viscous porosity of flesh – my flesh and the flesh of the world. This porosity is a hinge through which we are and of the world.
Nancy Tuana, ‘Viscous Porosity: Witnessing Katrina’

I am thrilled to announce today that Issue 4.4 of postmedieval, PREMODERN FLESH, co-edited by Holly Crocker and Kathryn Schwarz, is now published! As Holly writes in her Introduction (which is free to read and/or download HERE], and in which she performs a gorgeous reading of William Fowler's poem The Laste Epistle of Creseyd to Troyalus (turn of the 17th century) in relation to the themes of the issue and her own preoccupations with "reading in/on the flesh," Holly writes,

Reading in the flesh means we take the surface neither as an obstacle to deeper secrets nor as an end in itself, but as a densely intricate mixture of evidence and sign. This is despite the immediate allure of depth reading, which frequently allows us to get past misleading elements of a narrative’s self-presentation: is something else at work here? . . . Digging into the surface is crucial to reading in the flesh. . . . Surface and depth are coextensive in a way that frustrates both modes of reading. In an effort to capture just this sort of aporia, Heather Love has urged scholars to practice ‘flat’ readings, those that are, in the words of her title, ‘Close But Not Deep’ (Love, 2010). This approach has the virtue of ‘sticking to description,’ a laudable priority it largely shares with surface reading (Latour, 2005, 136–137). Love takes the text at its word, but, unlike proponents of surface reading, the flat reading she outlines retains a healthy measure of hermeneutic suspicion. By working to provide a ‘good description,’ flat readings ‘account for the real variety that is already there’ (Love, 2010, 377). In other words, by documenting tension, flat reading could describe the competing strains on Creseyd’s arrival without seeking to connect either to larger concerns.
. . .

Flat reading is deeply appealing, and influences much of what I have to say about reading in the flesh. I do not describe the work of what happens in this issue as flat reading, however, because, as essays in this collection show, Love’s method puts too much stock in distance. Keeping the flesh at a distance, as [Jan] Zysk and [Emily] King demonstrate in their readings of early modern stagings, is a spectacular failure. In somewhat different fashion, [Jonathan Gil] Harris accounts for flesh’s work across distances of both time and place, while [Frances] Dolan interrogates the veracities of time and place in flesh’s recollections. Reading in the flesh, unlike flat reading, assumes presence, contact and a collapse of the comforting distance of documentation. It does not link subjects through formal narratives that settle bodies into social position and literary history; instead, reading in the flesh enforces interpersonal implication at the level of the mutable, variable body.

It is the aim of this issue . . . to begin new conversations about embodied life, autonomous subjects, and the potentials and risks of social (inter)subjectivity. This is, finally, a collective yet varied effort to flesh out what it means to live, write, and read in the flesh.

The issue's contents are richly various, concerned with premodern flesh in many guises (human flesh -- dead, carnivalized, sexualized, hybrid -- manuscript's skin, the ‘translated’ flesh of vegetable matter, and so on) and you can see the Table of Contents here:

I am also personally really stoked (yes, I said that) about the cover image for this issue, which comes from a photographer and artist, Sally Mann, I have long admired, ever since my days as an MFA student in Richmond, Virginia (1988-1992), when I first saw her work exhibited at the Virginia Museum of Fine Arts. In our "About the Cover" feature on the journal's website, here is what I write about the image we chose:


I look, all the time, at the people and places I care about, and I look with both ardor and frank, aesthetic, cold appraisal. And I look with the passions of both eye and heart, but in that ardent heart, there must also be a splinter of ice. (Sally Mann)

The photograph on this issue's cover, Semaphore (2003), is from Sally Mann's Proud Flesh, a series of nude studies of her husband. Mann is considered one of the most important photographer-artists of the 20th and 21st centuries and her work is held in the most important museums in the world. From Immediate Family (1992), portraits of her children (many nude) which ignited great controversy for their frank capture of childhood's many spiritual and physical vulnerabilities, to What Remains (2003), a study of mortality, death and decay which included portraits of Mann's dead greyhound and also bodies from a forensic anthropology facility, to Proud Flesh (2009), which documents the progress of her husband's muscular dystrophy over a period of six years, Mann has produced a powerful body of work that documents both the stark beauty and haunting frailty of bodies and flesh. As this winter's issue, co-edited by Holly Crocker and Kathryn Schwarz, concerns itself with premodern flesh (human flesh -- dead, carnivalized, sexualized, hybrid -- manuscript's skin, the ‘translated’ flesh of vegetable matter, and so on) and the ways in which, as Crocker writes in her Introduction, flesh ‘is ever present’ and ‘the preoccupations it galvanizes are terrifyingly (and sometimes thrillingly) capacious,’ we felt that Mann's study of her husband's sublime body (under ‘affliction,’ as it were) provided a rare opportunity to join the premodern and the modern under the sign of the enduring in/human form, especially as Mann has employed here (and elsewhere) a 19th-century ‘wet plate’ process, in which glass plates are coated with collodion, dipped in silver nitrate, and exposed while still wet. But Mann takes this even a step further by adding imperfections to the final plates because she does not let the collodion go all the way to the edges, and thus her images often have the feel of the damaged ‘antique.’ This gives to her photographs what The New York Times has called ‘a swirling, ethereal image with a center of preternatural clarity.’ Of the work undertaken for the series of photographs that comprise Proud Flesh, which was partly a study of the aging body as well (Mann and her husband have been married for over 40 years), Mann has written, ‘Like Flaubert, two things are sacred to me in my process: impiety and perfection -- the former often hereditary, the latter always hard-won. Beyond the felicitous “unifying accidents” that occasionally grace the work, making art requires tenacity, a temperament born of an ungodly cross between a hummingbird and a bulldozer, and, most of all, practice. Practice looking.’

So, for your holiday-break pleasure, dig into some PREMODERN FLESH. [Yeah, I said that.]
Posted by Eileen Joy at 1:19 PM