[before you read my post, make sure you read Dorothy Kim's guest post on sexual harassment in the academy.  Send all your budding medievalists and early modernists to check out the Ph.D. at GWU. Most importantly, however, you should recreate the first nearly-eight-minutes of the Scale Session at BABEL Santa Barbara by reading Karl's post on the subatomic.  Feeling suitably small and/or large?  You may proceed.]

At BABEL Santa Barbara, I took part in the Scale plenary session—a collection of twelve different meditations on terms having to do with Scale. I found the entire session beautiful, exhausting, and deeply, deeply impressive – in terms of sheer breadth of approach, subject matter, and voice. I was excited to be a part of it, and so glad I was.


When I first started my paper, I swiftly realized that four minutes would mean “more footnotes than paper.” I’m an Anglo-Saxonist, so I’m usually just fine with that formatting requirement. This time, however, it was a slightly different enterprise. I wanted to find Old English ideas about the cosmic. I was almost certain that these ideas did not exist in a way recognizable to “modern” thinkers about the universe. So I did what any good Old English scholar with a paper to write would do: a search for cosmic in the OED, moving to a search in my Bosworth Toller dictionary app, followed by a search on the MED. Several references to cosmic appearing in the early Middle English Ormulum – a section that eventually got cut out of my paper for reasons of time – sparked a memory. Those who have studied it know: there are some very strange things that happen in the Anglo-Saxon Chronicle. For example, in one year, there is a great mortality of birds. No real reason given for it in the text. A lot of birds just died in 671. Which led me to wonder: I knew there were stars as portents in the Chronicle. But what if there were stars – like those dead birds – who weren’t there to mean something for humans, or at least weren’t given an explanation in the text? Which led me to the entry for 540, and my paper. Many things happened in the year 540 CE. But in this chronicle entry none of that becomes part of the text. For a brief space of a few lines, all we see is stars.
________________ 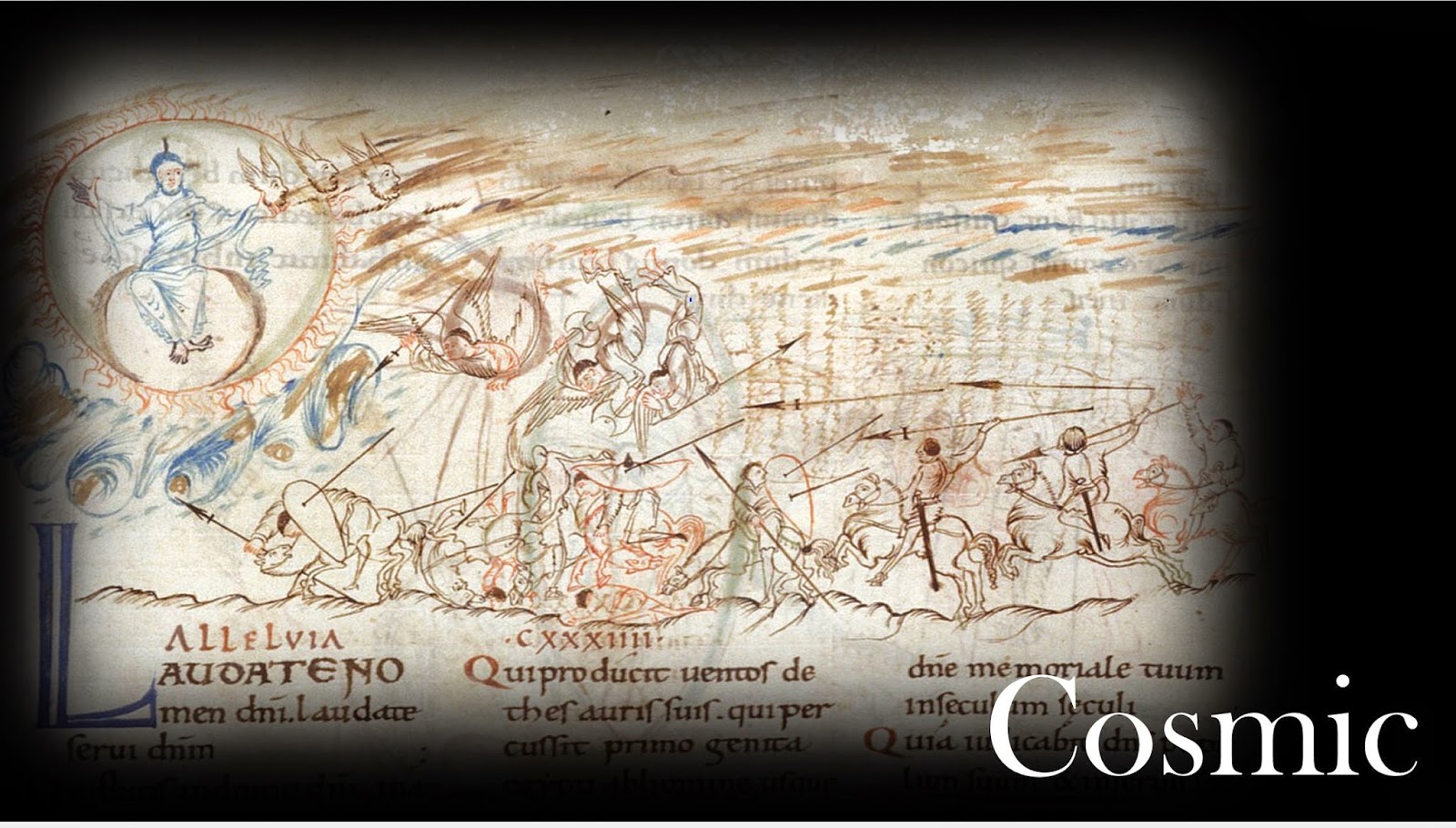 According to the Oxford English Dictionary, the cosmic is “Characteristic of the vast scale of the universe and its changes; applied to the distances between the heavenly bodies, the periods of time occupied in their cycles, the velocity with which they move, and the like.” In 1649, a now obsolete usage represents its first entry into the English lexicon, meaning “of this world, or worldly.” If you go far enough back in the literature, apparently, everything is about humans.


My question: “how can we think the cosmic?” It does not get bigger than this: the vast scale of the universe, everything from redshift to dark matter, knowing we are only that Pale Blue Dot—that’s us, that’s home (1)—that’s cosmic.


But could humans think about the cosmic before they could travel, or send proxies, to the stars? To the medieval writers and thinkers I study, the answer appears simple. To think about the cosmic was to think about God and his role in human events—that little man in the clouds in the Harley Psalter, sending angels into the time and tide of human events (which, of course, means war. Plus ça change.) Here and elsewhere it seems, medieval thinkers could not lift their eyes to the stars and see anything but the majesty of God. 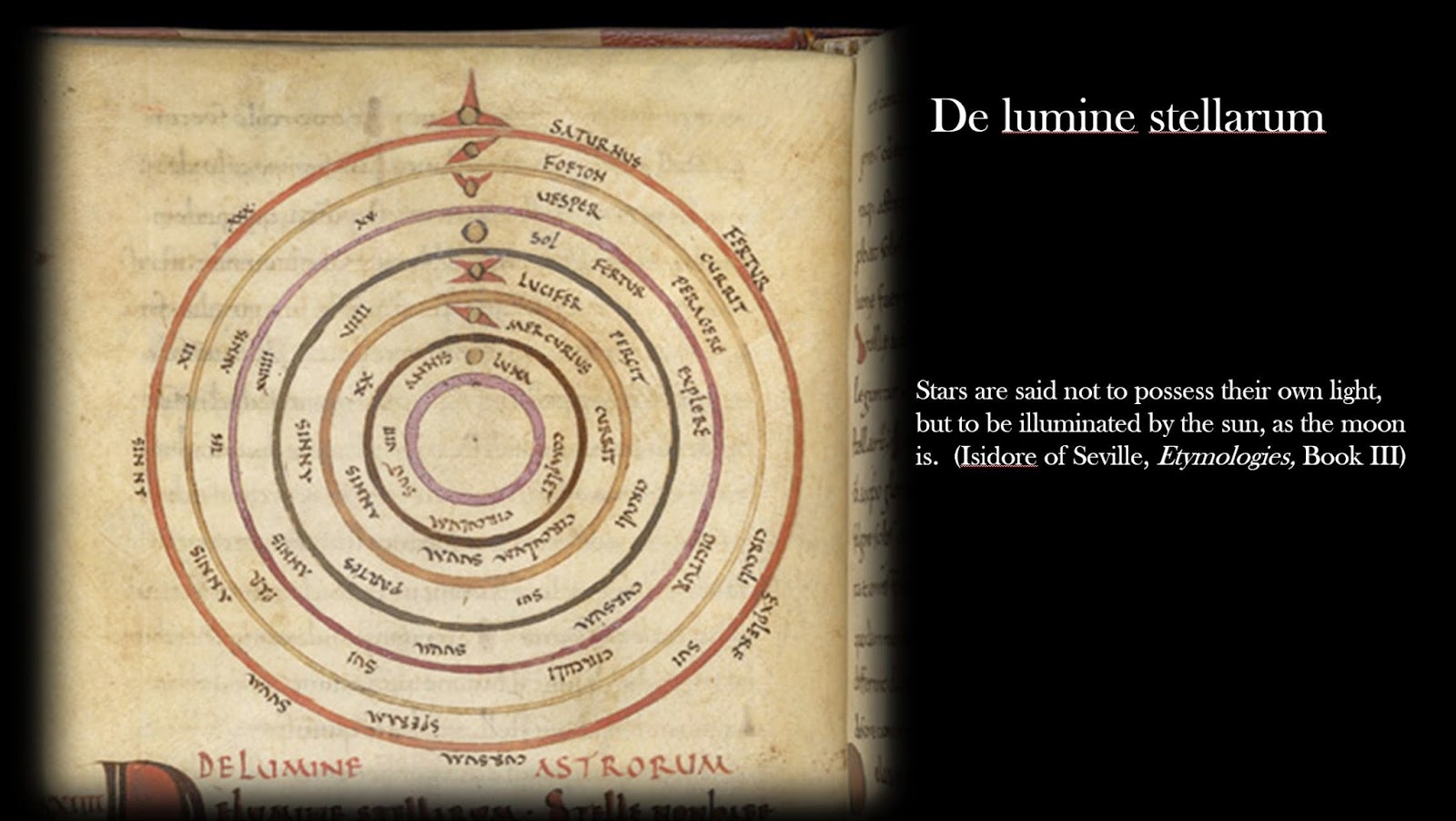 And yet: One need not know we’re made of star-stuff to know that stars matter in medieval literature. Take, for example, Isidore of Seville’s meditation on stars in the Etymologies. Stars, he writes “are unmoving and, being fixed, are carried with the heavens in perpetual motion.” Despite not understanding how the heavens moved (or ... didn’t), Isidore understood the vast distance into which our present idea of the cosmic falls: “many stars,” he says, “are larger than the ones that we see as prominent, but since they are set further away, they seem small to us.” Impossibly far away and difficult to understand: this sounds more like the Cosmic we expect in the twenty-first century, but these stars do not partake of the illumination from within, as it were, that characterizes our Milky Way. Stars, Isidore reveals, are like the moon: “they are said not to possess their own light, but to be illuminated by the sun”.


“Everything is allegory”—this should seem familiar (2). We could reduce Isidore’s assertion about the stars to an allegory for God’s illumination, or more pointedly, the modern/secular truism that things are not illuminated in themselves, but illuminated by humans. The Anglo-Saxon Chronicle, for example, offers a number of instances where stars metaphorically do not possess their own light. The chronicle entry for 1135 demonstrates this nicely: a king travels on the sea, and when he sleeps during the day, the sky grows dark, the sun become pale like the moon, “the stars were about him at midday. Men were very much astonished and terrified, and said that a great event should come hereafter. So it did.” The stars exist to tell us that the king is about to die. Other entries are less explicit, but stars behave strangely in conjunction with births, deaths, appointments to bishoprics, and all manner of human events. But rarely—very rarely—stars behave differently. 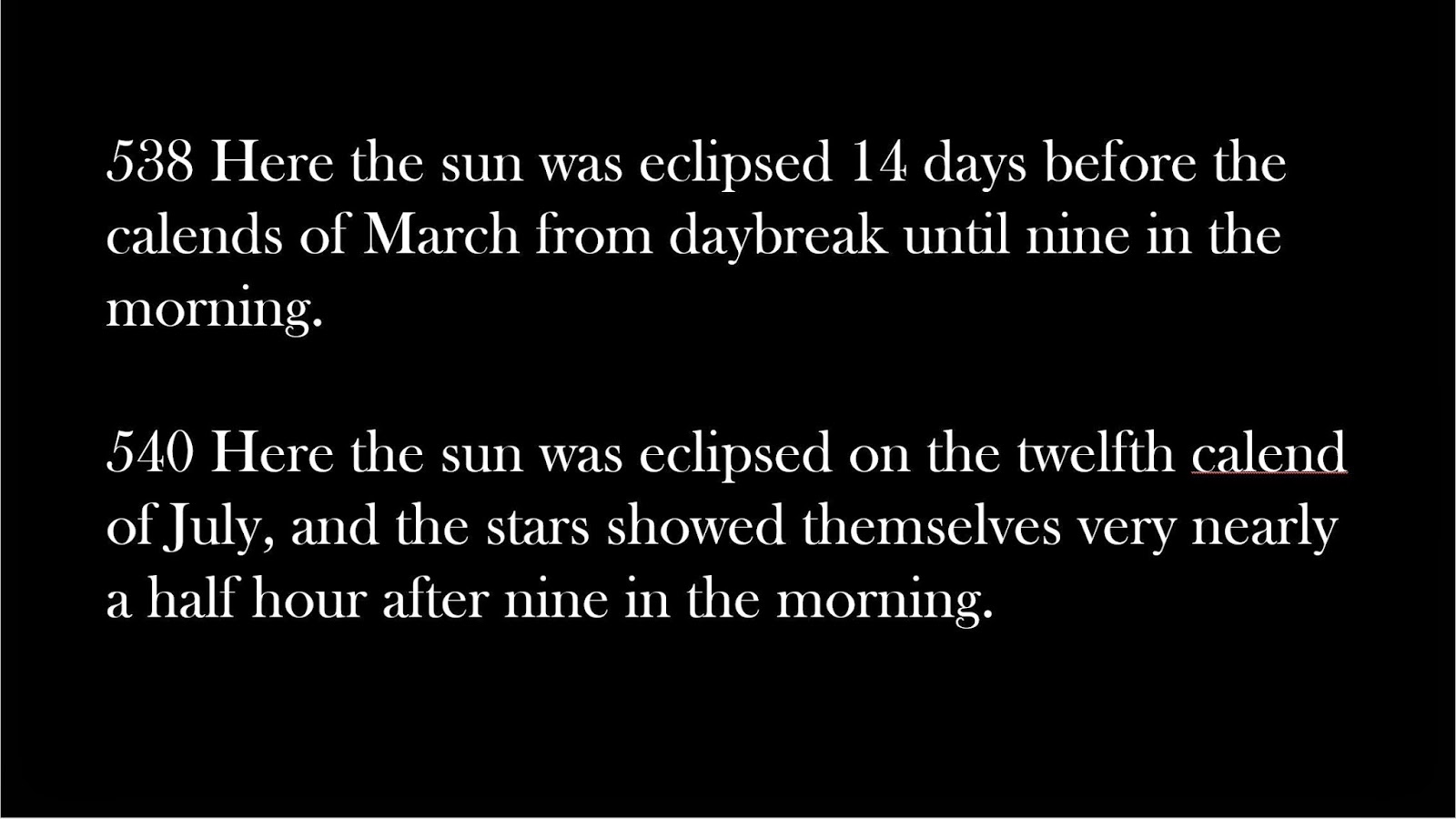 In the chronicle entries for 538 and 540 we see instances of astronomical signs that do not occur in conjunction with human events: Both years record eclipses, with the added bonus in 540 that the “stars showed themselves nearly a half hour after nine in the morning.” The text does not explain these events, nor does it follow them with human doings. These stars seem to exist, if only for a brief moment, beyond human meaning. 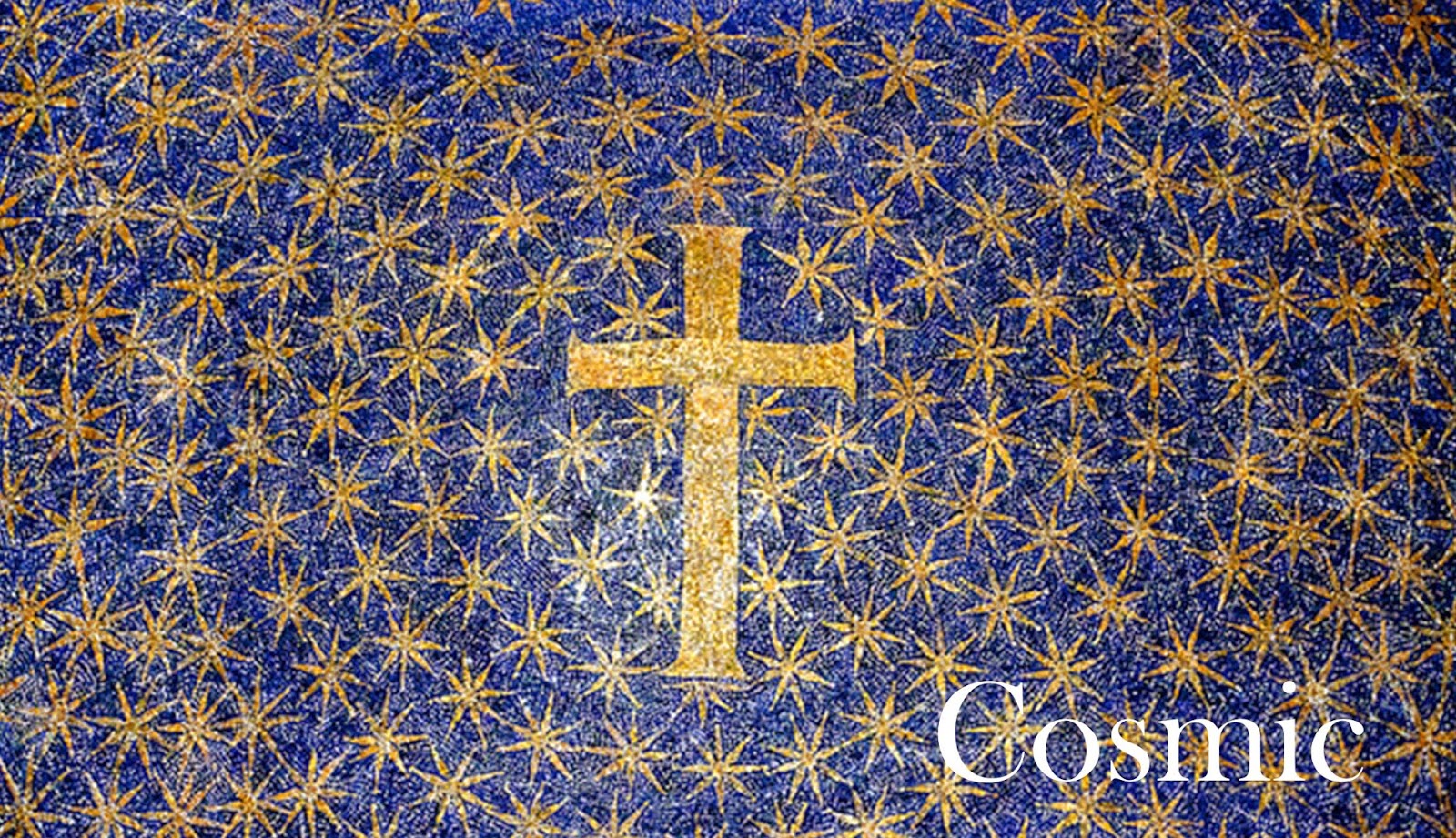 Thinking the cosmic, now or in the Middle Ages, requires a radical readjustment of scale, one difficult to perform and nearly impossible to fully comprehend. Yet, when one returns to old literature, we begin to see the tiny beginnings of thinking cosmically, thinking that will one day tend toward galaxies and interstellar expanses. Officially, the medieval period admitted no knowledge of an uncentered world—created by God, it was that scale that mattered, his Will that dominated it.  And yet, in the midst of a field of stars dominated by a single radiant intersection of the divine into a natural world, we can begin to see something else taking shape: we see stars out of time, showing themselves for nearly a half hour after nine in the morning. It is not much to go on, and centuries will pass before humans really understand—but in that most medieval of moments, stars cease to shine simply by virtue of a shining God, or the radiance of the Sun, or anything else. In that moment, we can begin to see stars that exist only for themselves –stars that are cosmic. 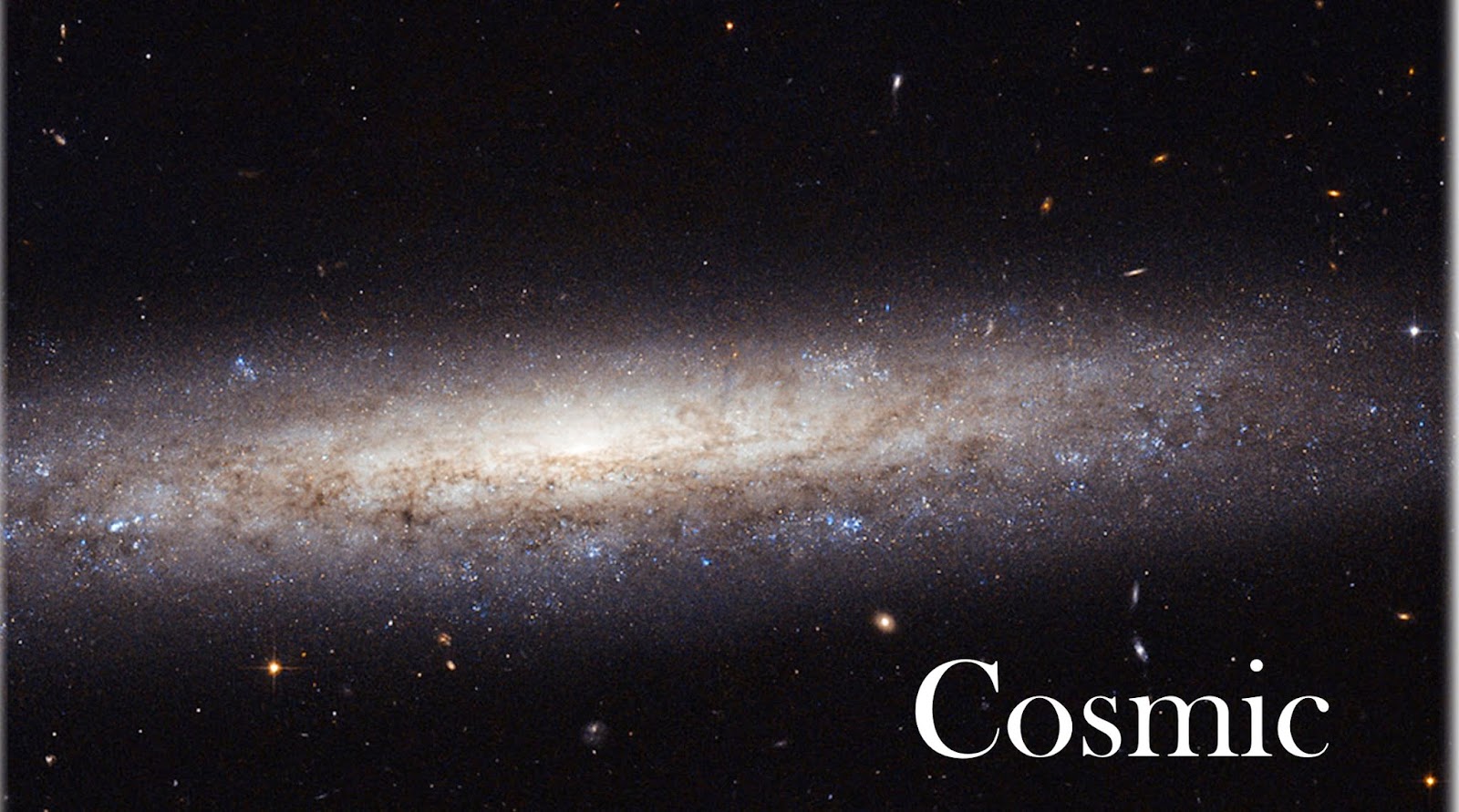 
2. This statement – “everything is allegory” – was one of the two things that Steve Mentz asked us to remember in his plenary. This citation was an attempt at humor.