Hugh of Avalon, and the Limits of Sympathy 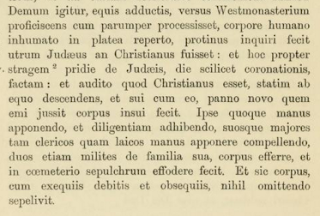 Gerald of Wales' life of Hugh of Avalon, bishop of Lincoln, speaks twice of his zeal for burying the dead.

Certain dead, anyway: here's a story on Hugh, once more interrupting an important trip to do his Christian duty. A free and partial paraphrase:


Hugh is on his way to Westminster, and he learns of a human body lying unburied in the street. He immediately asks whether it's a Christian or Jewish body, because just the day before, on the day of Richard I's coronation, the Jews of London had been massacred. When Hugh hears that the corpse [or however we want to resolve that implied pronoun] was a Christian, he at once dismounts, and has a new cloth bought, and has the corpse sewed into it. And assembling a funeral party from his retinue, he has it buried with all due ceremony.

Is he ensuring that he doesn't accidentally bury a Jewish body in a Christian graveyard? Or is it that he wouldn't have buried the body had it been a Jewish victim of the London pogroms? Might he then have delivered it to the remaining London Jews to bury? Or would he have just left it exposed in the street, again, for whatever Jews were willing to expose themselves as Jews the day after a massacre?

I think first of Jeffrey's post below: "Christians and Jews in Angevin England now in paperback."

You yourself might be reminded of this story from the same massacre, which I'm borrowing from Fordham's Medieval Sourcebook:


While the king was seated at table, the chief men of the Jews came to offer presents to him, but as they had been forbidden the day before to come to the king's court on the dav of the coronation, the common people, with scornful eye and insatiable heart, rushed upon the Jews and stripped them, and then scourging them, cast them forth out of the king's hall. Among these was Benedict, a Jew of York, who, after having been So maltreated and wounded by the Christians that his life was despaired of, was baptized by William, prior of the church of Saint Mary at York, in the church of the Innocents, and was named William, and thus escaped the peril of death and the hands of the persecutors.

The citizens of London, on hearing of this, attacked the Jews in the city and burned their houses; but by the kindness of their Christian friends, some few made their escape. On the day after the coronation, the king sent his servants, and caused those offenders to be arrested who had set fire to the city; not for the sake of the Jews, but on account of the houses and property of the Christians which they had burnt and plundered, and he ordered some of them to be hanged.

On the same day, the king ordered the before-named William, who from a Jew had become a Christian, to be presented to him, on which he said to him, "What person are you," to which he made answer, " I am Benedict of York, one of your Jews." On this the king turned to the archbishop of Canterbury, and the others who had told him that the said Benedict had become a Christian, and said to them, "Did you not tell me that he is a Christian?" to which they made answer, " Yes, my lord." Whereupon he said to them, "What are we to do with him?" to which the archbishop of Canterbury, less circumspectly than he might, in the spirit of his anger, made answer, "If he does not choose to be a Christian, let him be a man of the Devil;" whereas he ought to have made answer, " We demand that he shall be brought to a Christian trial, as he has become a Christian, and now contradicts that fact." But, inasmuch as there was no person to offer any opposition thereto, the before-named William relapsed into the Jewish errors, and after a short time died at Northampton; on which he was refused both the usual sepulture of the Jews, as also that of the Christians, both because he had been a Christian, and because, he had, " like a dog, returned to his vomit."

Posted by medievalkarl at 7:38 PM