Drinking and Conferencing at the Chronicle 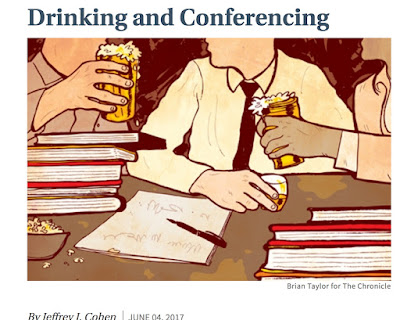 Readers may be interested in the short advice piece I wrote for the Chronicle of Higher Education on Drinking and Conferencing. The column began as a blog post here at ITM, and that in turn came from a Twitter conversation: the power of social media.

This is my first real piece of "official," non-academic public writing, and I have to say that one surprising thing is ... some of the public who read it. Why would so many people feel compelled to inform me that they do not think there is a problem with (for example) recovering alcoholics being in places where alcohol is served because they are recovering alcoholics and they don't have a problem with it. What else can I say besides hey that's great, but just because you haven't been shut out does not mean that others have not been. Thinking seriously about access to community means thinkings seriously beyond your own self. And then there are the ones who point out that donuts are bad for you, and maybe people with eating disorders will be placed in a bad situation ... to which I say, people, I am talking about multiplying modes of conviviality! There is no single way to do this. Let's try as many things as possible and attempt as much conclusion as we can.
Posted by Jeffrey Cohen at 5:21 PM