The “Knight’s Tale” in the Age of Brett Kavanaugh


Dr. Christine Blasey Ford testified to the Senate Judiciary Committee on Thursday, September 27th.  The day before her testimony was the first day of my Fall quarter class on Chaucer.  I hadn’t taught this class for 4 years and the world had drastically changed since. I had spent the summer reading through what seemed like miles and miles of incredible scholarship both on Chaucer and on the pressing need for medievalists to address their own complicity with systems of white supremacy and patriarchy.  I had spent the first day of class walking students through the various ways in which our work during the quarter would touch on current issues—many of them would be difficult, I said, and I listed off the different themes of various tales that would be traumatic for some or perhaps all of us: rape, sexual assault, transphobia, incest, kidnapping, racism.  I was not prepared, however, for the ways in which the very first tale we read, the “Knight’s Tale,” would become viscerally and immediately relevant and the ways in which I and my students would be forced to interrogate elements of the tale that, at this particular moment in time, erupted, not unlike a fury, full of anger and terror and eliciting shock and sadness simultaneously.

The day after Dr. Ford’s testimony, my notes for class indicated that I would talk about the ways in which the pilgrims would work to define, or redefine, themselves through their language, through their unstable words, and why this  labor of self-making was especially urgent in 14th Century England.  As I always had, I read to them from the Wife of Bath’s prologue, in particular her question, “Who peynted the leoun, tel me who?” I was unable to make it through the passage without my voice breaking, without having to stop and collect myself, without looking up and telling the class that reading that section, that day, was hard for me. Dr. Ford had repainted the lion in her testimony, and the wickedness of man was laid bare. But the man who was accused did not seek to redress that wickedness.  Instead, he raged against it with full-throated indignity, with tears and uncontrolled anger.  His carefully plotted ordering of events—the carefully plotted ordering of events that a majority of the senate would ultimately endorse—was being threatened, was being delayed by the voice of a suffering woman.
“What folk been ye, that at man homcomynge
Perturben so my fest with criyng,”
Quod Theseus.  “Have ye so greet envye
Of my honour that thus compleyne and crye?
—“Knight’s Tale,” 905-908 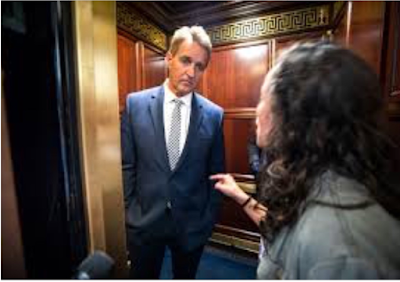 I realized that our discussion of the “Knight’s Tale” the following week—a week that would include almost non-stop media coverage of a limited FBI investigation and, of course, a dissection of the testimony of both Dr. Ford and Judge Kavanaugh—would force us to confront, in real-time but with a 600-year-old text as both witness and accompaniment, the ways in which patriarchy and male privilege, when threatened, will wield whatever weapons they can to maintain control, will flail and fight, will form unlikely alliances in order, ultimately, to silence those female voices that dare to challenge it, that dare to speak their own truths, that dare to utter their own desires and fears.

Our conversations the following week included more attention than usual to Theseus’ particular and peculiar need to maintain his male, lordly control in the tale told by Chaucer’s Knight.  From his reaction to the Theban widows, to his response to finding Palamon and Arcite fighting in the grove, Theseus became the object of intense analysis in our class, his repeated orderings and re-orderings read against images like this: 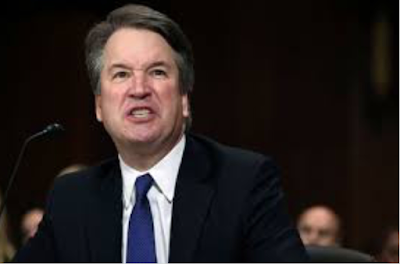 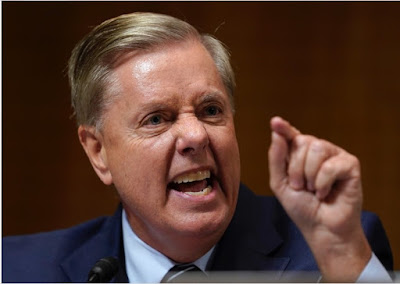 But of course Theseus isn’t the only figure of male anger in the tale, as Saturn starkly reminds us, “My lookyng is the fader of pestilence” (2469), and the anger of the tale is complicated by its links to both lordly mercy and the ideals of courtly love.  So, we also attended to the somatic effects of broken oaths between men as well as the unwelcome and unasked for effects of love on the cousin-knights.  And while Theseus gets angry in the tale, he also finds much of the situation of Palamon, Arcite, and Emelye strangely amusing.

But this is yet the bestie gam of alle,
That she for whom they Han this jolitee
Kan hem therefore as much than as me.
—“Knight’s Tale” 1806-1808

Ford: Indelible in the hippocampus is the laughter. The uproarious laughter between the two and having fun at my expense.

Ford: They were laughing with each other.

Leahy: And you were the object of the laughter?

Ford: I was underneath one of them while the two laughed. Two friends having a really good time with one another.

Brett Kavanaugh was confirmed by the Senate on October 6th, a Saturday. The following Monday, a student asked to discuss Theseus’ statement immediately after his “beste gam of all” comments: “I spoke as for my suster Emelye, / For whom ye have this strif and jalousye” (1833-1834).  The question was simple, “Why does Theseus have to speak for Emelye here?  Why don’t we hear her voice?” It was complicated, of course, by the fact that we do hear her voice, later in the tale, and it is an expression of her desire, expressed with four negatives in one line, “Ne never wol I be no love ne wyf!” (2306).  But it is also a voice of panicked pleading, of fear so great that it makes Emelye almost insane:

And at the brondes ende out ran anon
As it were bloody dropes many oon,
For which so sore agast was Emelye,
That she was wel ny mad, and gan to crye,
—“Knight’s Tale” 2339-2342

And we arrived at an unhappy explanation:  A female voice of resistance, a female desire that runs counter to male privilege and control, is too dangerous to be heeded.

“Mr. President, I listened carefully to Christine Blasey Ford’s testimony before the Judiciary Committee. I found her testimony to be sincere, painful, and compelling. I believe that she is a survivor of a sexual assault and that this trauma has upended her life. Nevertheless,” (Statement by Susan Collins, Republican Senator from Maine, October 5th, 2018)

And in this context we were left considering the furie that ultimately disrupts Arcite’s victory and violently bursts his body.  A female deity of vengeance upending the plans of men appeared at first to offer some consolation to our readings over the last two weeks—justice served, vengeance enacted, male privilege brought low.  However, as my students pointed out, Emelye’s wishes are still ignored.  Her voice is never heard again. Theseus once mores speaks to her and for her with words that were particularly difficult to hear at this historical moment, “‘Suster,’ quod he, ‘this is my fulle assent” (3075).  Ultimately, then, it is Theseus’s desire that wins out, his “assent” in the face of Emelye’s lack of consent that reorders the world of the “Knight’s Tale,” that allows the Knight’s own voice to end the tale, reassuring us that all is well, that Palamon and Emelye are in bliss.  But it is hard for me, now, to forget the “bloody dropes” and Emelye’s vocal and vehement rejection of patriarchy, lost in the rhetorical excesses of the Knight’s storytelling, haunting it, a weight of loss that is almost unbearable.
“At the same time, my greatest fears have been realized -- and the reality has been far worse than what I expected. My family and I have been the target of constant harassment and death threats. I have been called the most vile and hateful names imaginable. These messages, while far fewer than the expressions of support, have been terrifying to receive and have rocked me to my core.”
—Dr. Christine Blasey Ford, Senate Judiciary Testimony, September 27, 2018

"On behalf of our nation, I want to apologize to Brett and the entire Kavanaugh family for the terrible pain and suffering you have been forced to endure."
—President Donald Trump, October 8, 2018

Posted by medievalkarl at 8:27 AM

It’s laudable that you drew attention to the male/female power dynamics here. I wish my teachers had done so in 1991 re Anita Hill, and my profs had done the same in 1998 re Monica Lewinsky. Instead it was a kind of joke—like “how gauche to be offended by sexual misbehavior.” It sent a clear message to young women of my generation—“don’t be so uptight!” ��