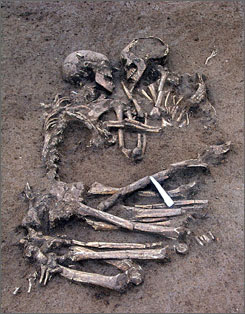 Prehistoric skeletons won't be separated
Posted by Jeffrey Cohen at 10:55 AM

I wonder if these bodies weren't purposefully arranged this way as part of some type of execution--the relative youth of the skeletons suggests it. Sometimes, love kills.

Leave it to Eileen to find the dark side of Valentine's Day.

Though, I must admit, a similar thought did cross my mind. Who knows why the tableau was arranged like this? It's warm and fuzzy to project back some undying love ... but without the story that surrounds the bones it is tough to know if this really was two lovers.

Or is that a fossilized box of Russel Stover chocolates in the corner??

They will also look at the skeletons to verify their sex and search for signs of illness or other possible causes of death, she said.

That "verify" is interesting to me. This story will become a lot more heated if it's a same sex couple.

i have to say it... awww... one's even got their hand on the other's cheek

maybe the couple is actually the original romeo and juliet, only not so shakeperean and they died together

could be a double suicide

As to "verifying" the sex of the skeletons, there has been a lot of work in recent archaeology scholarship on the somewhat bogus traditional methods for identifying gender of skeletons [either through determinations of large vs. small or by various material objects placed in gravesite, i.e.: if it's a sword, it's a boy! but if it's a cooking implement, it's a girl! and so on and so forth]. Two important essay collections which include chapters that address the subject of grave-sites and gender/other social markers are Frazer and Tyrell, eds., "Social Identity in Early Medieval Britain" and Theuws and Nelson, eds., "Rituals of Power: From Late Antiquity to the Early Middle Ages."

And yes, I really think this grave is evidence of a ritualized execution. Sorry, but I bet I'm right. Don't import your Romeo & Juliet romanticism into it, unless these two belonged to a very emotionally sensitive tribe whose chief grave-digger was a secret artiste. Just maybe. But generally speaking, rites of internment were a community affair.

see all literature aside, why if the grave has a sword is the skeleton automatically a boy? logically wouldn't defending the village be everyone's business? what if a plague whiped out most of the men within that village leaving it's women behind the defend it? the same idea goes for a spoon type of deal, why does a cooking implament denote girl? a man can cook just as readily as a girl.

i know i know kind of a pointless argument especially in light of all the lovely scholarship to prove the opposite however it's just something that bugs me.