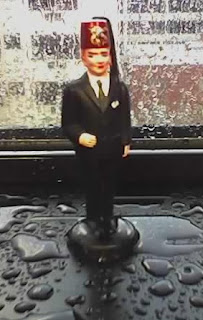 In that hour when the light has the fineness of sand,
I happened on a street unknown to me,
ample and broadly terraced,
whose walls and cornices
took on the pastel color of the sky
that nudged the horizon.
. . . . .
Only later did I come to think
that the street of that afternoon was not mine,
that every house is a branching candlestick
where the lives of men burn
like single candles. --Jorge Luis Borges, "Unknown Street"

time again, and for this ancient/medieval edition, the Tiny Shriner is your guide. Although he appears immobile, even water-logged, on the ledge of JJC's office window, he's a veritable time-traveler, a frequent flyer, a regular at the Metropole, a flaneur of the alleys of cyber- and other spaces. For this venture, we at In The Middle stitched for him a tiny backpack loaded with tiny ham-and-cheese sandwiches, tiny pickles, two tiny bottles of Sancerre, a tiny handheld g.p.s. p.d.a, tiny Marvel comix and issues of Vogue [for the down-times], extra tiny black ties [to always look spiffy], and a tiny bag of bread crumbs [so he could find his way back]. We picked him up yesterday at the Foggy Bottom metro stop, and while his arms were tired, his heart was brimming over with these notes and letters and burning arrows from the ancient/medieval blogosphere:

WARNING: Because the Tiny Shriner has taken a New Year's vow to try to live a life that is as anti-hierarchical, anti-organizational, anti-schematic, and anti-linear as possible [and that also includes room for more meetings in the dark], he offers these worthy entires in no particular order, but he gives all of them his recommendation. After all, he bound them all together in a fascicle, a quire, a papery bundle, a rolled broadsheet, and he leaves them here as fragments.

From Muhlberger's Early History, we have the supposed recent discovery of the corpse of Hugh Despenser the Younger, the "favorite" of Edward II who was executed by "drawing and quartering" in 1326, and whom Muhlberger describes as a "terror victim." And over at Zenobia: The Empress of the East, the question is asked: "Was Philip the Arab a Secret Christian?"--likely not, but at the very least, he might have been some kind of sympathizer to Christians during the earlier reigns of anti-Christian terror. The slipperiness of descriptions of mounted calvary soldiers in medieval wars, which can lead to "the illusion of chivalry," is fruitfully explored at The Wapenshaw. Since we're in the groove of torture and morbidity, the Tiny Shriner is excited to broadcast the news of a weblog, Executed Today, entirely devoted to the "unrepresentative but arresting view of the human condition across time and circumstance from the parlous vantage of the scaffold." Check out, especially, Perpetua's end on March 7th in 203 and Dante's execution in 1302 on March 10th. And just in case disinterments and executions get you down, you might be happy to know about the re-interment of 3,000 eleventh-century Anglo-Saxon skeletons. But enough about torture, terror, war and death; what about elves and fairies? Richard Scott Nokes over at Unlocked Wordhoard contemplates the relation of medieval elves and fairies to contemporary bugs, viruses, and aliens.

How do we write a book and "master" the "vast and complex archives without re-instating master narratives over them? is the important question recently explored by Stephanie Trigg. How do glossing and phenomenology "both express a longing to go beyond words and images to the reality of things themselves, not by transcending words and images, but by entering more deeply, perversely, wonderfully into them, by conjuring the presence of the res ipsa apophatically, via explanation as the intensification of absence, as the presencing by absencing of what is explained"? Ask Nicola Masciandaro at The Whim. Thinking about Nicola just always naturally leads the Tiny Shriner to the question: Was Moses tripping when he saw God? Check out Archaeporn's skeptical take on this question at "A Review of Methodology in Biblical Entheogens." Did you ever want Hellenistic illustrations on your Chuck Taylor high-top sneakers, but it seemed too much to ask for? Look no further than here. Should "medievalism" sometimes give us pause? Yes, says Jeff Sypeck, especially in relation to medieval toy shopping and the 1389 Battle of Kosovo, in his post "Your face, your race, the way that you talk . . . ." Can you write about sex and still be successful? The question seems a tiny bit odd to the Tiny Shriner [but then, what does he know?], but see the answer for yourself at Magister et Mater's post, "Sex, historians, and assumptions."

The Tiny Shriner has to confess something: does anyone do professional "problems" and "dilemmas" and "questions" within medieval studies and academic life more generally better than Dr. Virago? Probably not, and it's worth sharing here more than one of her recent posts, as well as the responses she often inspires in other corners of the academic blogosphere: so, regarding what kind of "life" it is, and what kind of "work" we do within a humanities department, check out "From Dr. Virago's e-mail inbox," as well as caught in the snide's response, "On Teaching, Research, and the Academic Class System." Equally interesting is Dr. Virago's response to the "Why I Teach Literature" meme: "Why I Teach Medieval Literature," and also Matthew Gabriele's contribution to this discusson over at Modern Medieval and Larry Swain's at The Ruminate. Our very own Mary Kate Hurley had an early volley in this meme over at her blog Old English in New York. Finally, and ever more recently, Dr. Virago has sparked a lively discussion on publishing and visibility within medieval studies, to which we at In The Middle have responded here. And just so we don't think it's always about "us," Dr. Virago also had a lovely and moving [if brief] post recently about remembrance, Chaucer, and the recent shootings at Northern Illinois University.

Did they have "fan fiction" in the Middle Ages? Carl Pyrdum at Got Medieval has some thoughts on that. Might it be true that, after the passing of the Pax Romana, there was "no catastrophic break, rather antiquity faded into the medieval period seamlessly and qualitatively life went on"? Check out Razib's answer in "The Material Consequence of the Pax Romana" at the group weblog Gene Expression. How weird can the intersection between the medieval and modern get? The state of Arizona is interested in building a moat to keep out Mexican immigrants, that's how weird. Do societies really "evolve"? Phil Paine says that when we think so, we're "Barking Up the Wrong Tree." Is the so-called "Secret Gospel of Mark" a "find or a forgery"? Thoughts on Antiquity shares an interesting panel discussion on the subject. What happens to our books when we're dead and gone? Mary Beard has some answers in "Dead Men's Books," but be forewarned: it isn't all pretty. Wait, didn't we say above we're taking our leave of morbidity and turning away from the icky dead? So let's stick with Mary Beard, who is usually fun, and ask, "What Made the Romans Laugh?" But be forewarned [again]: you may not get the joke. Finally, the Tiny Shriner would like to say that he always wanted more sex out of the Gospel of Philip, and now, thanks to Philip Harland, he's got it. Yes, this is a good place to stop.

Just in time -- I was afraid I'd have to get some work done this week.

Thanks for the links and the undue praise!

Well done Eileen! I mean, Tiny Shriner. And to think I never noticed he was missing from my office sill.

A beautiful Tiny Shriner/Carnival hybrid! And if I may say so, Dr. Virago deserved her own paragraph!