A Note on Symkyn's Nose 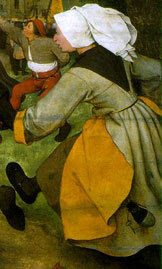 I taught as much of the Reeve's Tale as I could yesterday, but I must take it up again on Wednesday: for the extended discussion, I offer thanks, first, to the inspiration from the ill wind in Holly Crocker's Comment in this thread, where she characterizes the Reeve's Tale as "one of the ugliest pieces of literature in my scholarly ambit," and secondly, to my students' excellent questions: e.g., "there's a warning to turn the page in the Miller's Prologue. The Reeve's Prologue has no such warning. But the Miller's Tale is a lot less ugly than the Reeve's Tale. What's going on?"

Because I can't wait for Wednesday, here's some (minor!) material I couldn't get to yesterday.

We all know that the Reeve's Miller, Symkyn, aspires to be something more than a churl. Symkyn is in fact slightly better than Oswald himself at playing the clerk: after all, Oswald's sermon on old age is as notable for its incoherence as for its biliousness, whereas for all Symkyn's contempt for clerks, he's the only one in the tale who evidences any knowledge of contemporary currents of academic philosophy ("Myn hous is streit, but ye han lerned art. / Ye konne by argumentes make a place / A myle brood of twenty foot of space" (see William F. Woods, "Symkyn's Place in the Reeve's Tale," The Chaucer Review 39.1 (2004) 17-40). It's like someone in my family--not academics, not readers, unless one counts the Bible and assorted devotional guides--one day snapping at me, "You're the poststructuralist: you should know it's impossible!"

Symkyn has problems, however, not least among them his name (in the following points I may have been anticipated: see #172). As a familiar form of Simon, it of course recalls simony (admittedly in a loose form): like his father-in-law, he is wasting the substance by which he should be nourishing the community. As morally dissolute as this is, it's not so bad: after all, it's through 'simony' that he hopes to transform his little place into an infinite realm (again, my thanks to the excellent Woods article cited above). But the name's also a learned pun on two other counts.

First, it recalls the Latin simius or simia, ape, surely (barring the pig) the most churlish of animals, and the animal most suited for accusing churls of mere mimicry. In its uncanniness, mimicry of course has its powers of destabilization (e.g., Bhabha, "Of Mimicry and Man: The Ambivalence of Colonial Discourse," Location of Culture Chapter 4), but whatever its powers, there's no compliment meant. Here we have, for example, a charge of inauthenticity through the implicit comparison between Symkyn's finery ("as eny pecok he was proud and gay") with the Squire's. And so forth.

Second, the Latin for snub-nose is simus (for this point, thanks to John M. Steadman, "Simkin's Camus Nose: A Latin Pun in the Reeve's Tale?," Modern Language Notes 75.1 (1960): 4-8). Symkyn's "camuse" nose (3934) and Malyne's "kamuse" (3974) of course recall the wide "nosethirles" (557) of Robyn the Miller. But if Steadman's correct--and why not?--we also have a pun. We should note that because the pun's based on rather obscure Latin (where "obscure" = vocabulary I don't know off-hand), it's one that only the learned would recognize. Whatever tidbits of clerical learning he's picked up, Symkyn himself would not be in on the joke. Only clerical readers--almost a pleonasm, and certainly a group that includes us--would know that he cannot escape his class, since his name and face are linked in an otherwise secret sign of his peasantness about which he would be totally ignorant. Whatever he is, he must be. It's written on his face: anatomy is destiny!

Looks like a magnificent session--wouldn't it be great if we could guest each other's classes? I think your knowledge of animality as it relates to temperament would be a real source of insight for me and my students!

What a nice thing to say! It'd be a hoot, both to do it, but also to watch someone else teach this material (although I wonder if guesting entails the first-day-jitters?). I often try to imagine what our (all ITM'ers, present and past and even future) classrooms look like.

I almost wish Jeffrey hadn't told his teaching by candlelight story, as it's now permanently fixed in my mind.