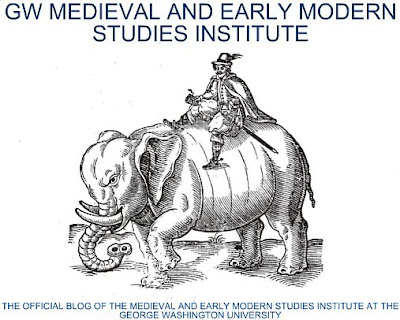 Sorry to interrupt our book club conversation, which Karl has launched so well. I hope to post something relevant later today or early tomorrow.

Readers of this blog -- especially those living near Washington, DC -- may be interested to know about the website for the George Washington University Medieval and Early Modern Studies Institute (GW MEMSI). Here we will announce all news of relevance to the institute. Generously funded by GW for an initial run of three years, our first major event will be a symposium of relevance to our current Book Club: "Touching the Past," featuring Peggy McCracken, Julian Yates, Eileen Joy, and Carolyn Dinshaw. As of yesterday I became GW MEMSI's first Director. Yes, that means department chair and director of the institute at once. Next stop: Grand Duke of Luxembourg.

Second, Cultural Diversity in the British Middle Ages: Archipelago, Island, England (which I prefer to call by its initial name, "The Infinite Realms Project") is now in print. Would you ask your library to order a copy?

[nifty GW MEMSI logo designed by Lowell Duckert, the assistant to the director. He is also charged with following me around with a palm frond fan to ensure I don't sweat in the DC heat. He's OK at it, but he hasn't had a lot of practice yet.]
Posted by Jeffrey Cohen at 8:22 AM