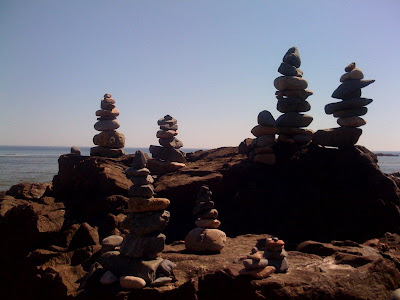 To your left you will see a picture I snapped along the Marginal Way, a seacoast path that connects the village of Ogunquit to Perkins Cove in southern Maine. The trail is neither long nor solitary, though at the right time of year you can have a vista of dark rocks and thundering waves to yourself. I've been traversing the path almost every year since I was a small child, when my parents would typically take the little Cohens there at the end of a beach day. We'd run from one end of the trail to the other, have ice cream near the lobster boats, then hike back along the path -- often as the moon was rising over the water.

On more recent vacations I've been taking my kids to the Marginal Way to clamber along the rocks and study sea life in tidal pools. We have a tradition of grabbing croissants from a local bakery and eating them within a secluded cove some steps down from the pedestrian path. Katherine and Alexander are convinced that pirates once buried loot beneath the sands here, and we speculate what we would do with the treasure should we be the ones to unearth an ancient chest ... and what curse we might earn by disturbing the fortune.

This year I noticed that a nearby cove had sprouted stacks of rocks. They are obviously the work of human hands, and remind me of the little lithic structures I've seen in Sedona AZ atop the red rocks, typically where astral vortexes are supposed to manifest. I doubt these Maine rocks have any connection to New Age mysticism ... but then again, I have no idea how they got there or who created them. I'd guess there are more than a hundred of these stacks in the cove. I'll even admit that Katherine and I made one ourselves, a miniature stack right at the tide line, knowing the waves would topple our architecture within a few hours. Something innately pleasing resided in that mixture of enduring stone and ephemeral art.

Oddly enough, I also noticed that a store in the village was selling small stacks of plastic rocks glued together in imitation of these diminutive seaside Stonehenges.
Posted by Jeffrey Cohen at 2:04 PM

And since we're talking stone, here is a quotation I pulled from a book I've been reading (thanks, Nicola!) for a project on Mandeville's rocks. This is from John Sallis, Stone:

Stone is ancient, not only in the sense that it withstands the wear of time better than other natural things, but also in the sense that its antiquity is of the order of the always already. Stone comes from a past that has always been present, a past inassimilable to the order of time in which things come and go in the human world; and that nonbelonging of stone is precisely what qualifies to mark and hence memorialize such comings and goings, such births and deaths. As if stone were a sensible image of timelessness, the ideal material out on which to inscribe marks capable of visibly memorializing into an indefinite future one who is dead and gone.

I would suggest that those markers are meant to be inukshuit (see: http://en.wikipedia.org/wiki/Inukshuk). The practice of building little cairns of stone, sometimes in the rough shape of a person, along trails and, by extension, roads, coasts, or anywhere there's bare ground and suitable stones, has become widespread in Canada in the last decade or so. I don't know if the practice has spread to Maine, or if this is the work of a visiting Canadian, but as you've shown, once one is erected, others follow, even without knowledge of the tradition.

Aven, thanks for posting: how very interesting. Ogunquit has always attracted a fair number of Canadians -- actually, Canadiens, since so many are francophone, and one of the pleasures of the beach there is that you can eavesdrop on a lot of French. This year there were more "Je me souviens" license plates than ever, mainly because of the weak dollar.

Still I'm not sure that, given the Quebec origins of most of these tourists, why they'd be erecting inukshuit... Is it really so widespread a Canadian practice?

The practice may have originated in Canada, but it has been widespread in northern, rural New England for at least twenty years. I have seen those stacks of stone throughout VT, NH, and ME. Of course, the border with Quebec is pretty porous and lots of people have family on both sides of the border. The practice is particularly rural, too--lots of farms have those markers. If you live in Northern New England, you have a fresh crop of stones cast up by the frost every spring, so there is always a plentiful supply of rocks to clear away to get the crops or garden planted. "Something there is that doesn't love a wall"--that something is Frost, upper and lower case both!

Actually, it's more likely the practice is related to Zen. Stone balancing, like sand gardens, is a part of that practice. Not to say that every stack of stones you see is made by someone practicing Zen, but it's certainly gotten into pop culture through that route.

Of course both anonymous and erynn may well be right about the reasons for the cairns you saw -- it's hard to know.

But just for your information -- yes, the inukshuk habit is widespread throughout Canada, and certainly common in Quebec. There's hardly a highway across the country that isn't lined with them -- and they're not Zen stone balancing, I don't think, since most of them attempt the "human-like" shape -- at least, wherever there are stones to use. And the logo for the Vancouver 2010 Olympics is a stylized inukshuk.

I love the discussion of imitation here, first of all.

Second question, since this relate directly to your current project, Jeffrey:

As if stone were a sensible image of timelessness, the ideal material out on which to inscribe marks capable of visibly memorializing into an indefinite future one who is dead and gone.

What medieval sayings/bits have you turned up about erosion? Is it a scandal?

Semi-related q: have you had a look at the exegesis on water rushing from the stricken rock? I imagine, especially in the Xian material, it's all dreadfully predictable, but perhaps there's a gem in there somewhere...

I too love the references here to imitation and cross-cultural dissemination. It'd great stuff, and makes me think a lot about the adoption of rocky art from prehistoric to medieval cultures.

As to erosion: boy do I draw a blank with that one. I am trying to think of ANY medieval reference to erosion and coming up with nothing. Anyone?

As to water from the rock: boring old Moses. I'm so much more interested in rocks that act like water, such as Mandeville's Gravelly Sea.

You may be interested to note that these stone piles are very common along the pilgrimage route to Santiago de Compostela. There are various tales told as to why they are present:

2. Counting how many people have passed (although this usage is no longer accurate at all!)

3. A historical and spiritual significance - each stone represents a pilgrim. There is a tradition which dictates that one takes several stones from home (or some significant location) and places them at several significant points, e.g. the Virgin of the Pyrenees and the "mountain of gold". The other tradition is that one leaves a stone at a point each day (often a memorial of some kind), and picks up another to carry forwards. The stones in this case symbolise pilgrims who may not have survived/completed the journey to Santiago in full - but that somehow they would still reach Santiago.

Thanks for that Sceopellen. It is ahrd to see the Marginal Way in Ogunquit as a pilgrimage per se (unless it is a pilgrimage from the beach to a cove where you can buy good ice cream and lobster rolls) ... but it would be interesting if this proliferation of rock sculptures was in any way inspired by pilgrimage routes!

...there is a sculptor in the area that does this type of stone creation at the League of NH Craftsmen's fair at Mt. Sunapee in New Hampshire. A friend rent a place on Marginal Way this week and took me to what she called, the "art beach". I shot dozen or so photos of the Sculpture Garden. I found this blog searching the web to see if anyone takes credit for starting this stone sculpture garden....I just added my contribution to the art beach too...