And now on Jumbotron 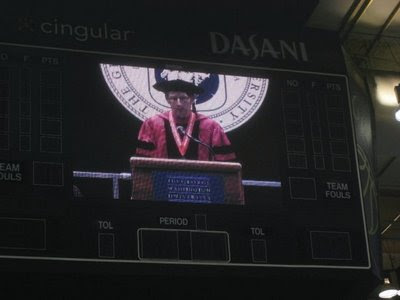 [JJC on the Jumbotron, sponsored by a defunct cellular phone company and bottled tap water. Photo by Jonathan Hsy]

This year I've spoken before the largest audiences I've ever held captive: my SEMA plenary was the most substantial talk, but I was also onstage in front of three hundred people to introduce Edward P. Jones, then later in the spring for Michael Chabon. Yesterday trumped all of these events, and gave me a bout of insomnia in the process. I was the faculty speaker at GW's Columbian College Celebration, the gathering at which our undergraduates have their names read aloud, receive a medal, and are delivered a round of hearty handshakes. The festivities are held in our sports arena, which seats 5000 audience members. Overflow crowds watch via closed circuit TV in a nearby auditorium.

That I had been nominated to be the faculty speaker by the graduating seniors means the world to me. I wanted to give them some words that weren't commencement pablum (a genre with which I am now intimately familiar). Over the course of a week I wrote and then rewrote and then scrapped and then wrote and then rewrote and then scrapped small speeches more times than I can type here. What I truly wanted to say, though, came to me between 2 AM and 6 AM yesterday morning -- and in a reasonably well articulated chunk, at that. I jumped out of bed so quickly that I startled my spouse, raced to the kitchen and wrote out most of what I would say on an envelope. I had not initially intended to speak from notes, but I knew I had better have something on paper in case I passed out while striding to the podium. That way the dean could read my remarks for me (other faculty members had been instructed to pour water on my head and/or kick me vigorously).

Fortunately the faculty speaker is the second person to address the gathered crowd, so I did not have to sit on the platform growing nervous for long. I began by narrating in an off the cuff way my anxiety about delivering the remarks, and my hope that I could honor a day so important to the audience. I mentioned that I had admitted my nervousness to friends via a Facebook status update -- and the audience laughed, apparently because it is funny when old people do Facebook. I let them know that I'd been told not to worry, because no one would be listening to me anyway: they also found that amusing, so perhaps they were attending. Finally I mentioned that my colleague Tom Mallon had warned me not to glimpse my own image on the Jumbotron. Unfortunately I had already done that, I said, and I sympathized with them for having to listen to such a gargantuan, menacing-looking scholar with pores as big as moon craters.

As a humanist I felt obligated to read them a passage from a work of art that could resonate with the day. I chose a scene from Edward P. Jones's The Known World, one in which a man who had grown up in slavery, had been freed by his own son, but who had then been kidnapped back into servitude discovers a kind of liberation ... but only at the cost of his life. Shot in the back by a would-be owner who attempts to hold him captive on a remote farm, Augustus Townsend discovers in dying a mobility denied him in life:

When Augustus Townsend died in Georgia near the Florida line, he rose up above the barn where he had died, up above the trees and the crumbling smokehouse and the little family house nearby, and he walked away quick-like, toward Virginia. He discovered that when people were above it all they walked faster, as much as a hundred times faster than when they were confined to earth. And so he came to Virginia in little or no time. He came to the house he had built for his family, for Mildred his wife and Henry his son, and he opened and went through the door. He thought she might be at the kitchen table, unable to sleep and drinking something to ease her mind. But he did not find his wife there. Augustus went upstairs and found Mildred sleeping in their bed. He looked at her for a long time, certainly as long as it would have taken him, walking up above it all, to walk to Canada and beyond. Then he went to the bed, leaned over and kissed her left breast.

The kiss went through the breast, through skin and bone, and came to the cage that protected the heart. Now the kiss, like so many kisses, had all manner of keys, but it, like so many kisses, was forgetful, and it could not find the right key to the cage. So in the end, frustrated and desperate, the kiss squeezed right through the bars and kissed Mildred's heart. She woke immediately and knew that her husband was gone forever.

I choked up while I was reading that passage, and my eyes were watering. I admitted to the audience that no matter how many times I read those words, I will always cry when the kiss finds it way through the cage. And then I said:

Literature enables us not to live a circumscribed life.

Augustus had to wait for the moment of his death to feel such freedom to wander, to discover that the world’s distances are transversable by means other than narrow roads previously paved. His kiss, his message, found its way through the bars even without the proper keys: nothing can constrain our desires, especially when they are propelled by love. So I would ask you in the years ahead to inhabit a world as wide as possible, and to remember those who do not possess such freedoms, and to endeavor to open worlds with them.

My favorite part of today’s celebration is the ceremony about to come, when your name will be called and your department or program chair will shake your hand and wish you well and send you to your post-college destiny. This year marks the third I’ve performed that role as chair of English, and although after 100 handshakes my arm is weary, no moment of the year is more precious to me. Looking into the faces of the young people who are about to leave us at GW, seeing their hope and their happiness, I am filled with confidence for the future about to arrive.

I was, I admit, overcome with happiness to be able to be part -- even a very small part, even for a very small amount of time -- of so many potential-laden lives.
Posted by Jeffrey Cohen at 10:58 AM

That's lovely, Jeffrey. Your insomnia did you good. Mazel tov.

I have read Jones's book and that passage never ceases to stop and wound, and also, amaze my heart. It takes my breath away again and again, and thanks for reminding me of it, and what an appropriate passage to share as well, given the remarks you wanted to make. You did a much better service to your students than the professor who gave such remarks to my College when I received my MFA. It is actually funny in retrospect, but he had obviously been having a bad sort of year and decided that he should do a kind of "life, as well as the universe, is meaningless and pointless, so good luck with that," and he quoted from Dostoevsky's "The Death of Ivan Illich." The parents were in shock. But hey, we got over it.

Oops: that was Tolstoy who wrote "The Death of Ivan Illich," not Dostoevsky! Sorry, Tolstory, or Dostoevsky [or whoever]! And thanks to Marty Shichtman for reminding me of this.

I really enjoyed this post, Jeffrey, especially reading it only a few hours after attending graduation ceremonies at my own institution. Those ceremonies were quite different from the ones you describe, of course. No jumbotron. 700 attendees, rather than 5000. And the degrees were Associate of Arts or Associate of Science; indeed, a few students were graduating with certificates of completion for specific vocational programs. But the point was the same. And, at least in my opinion, so was the potential.

Most of my colleagues are cynical about graduation. They complain, for example, about having to schlep over to the local high school; our own auditorium isn't large enough to hold all of the family members who attend. But my colleagues are missing the point, of course. The fact that so many people attend a community college graduation ceremony may seem silly to those of us with Ph.D.s from nationally known universities. But I think it's absolutely wonderful. I love the shouts and air horns from the crowd. I love when the students crossing the stage stop to smile and wave at a faculty member with whom they made some connection. I love when they cry. Yeah, it's just community college, but that's what makes the emotion so remarkable.

Anyway, thank you for encapsulating so beautifully what it feels like to be a part of that kind of potential.

I let them know that I'd been told not to worry, because no one would be listening to me anyway: they also found that amusing, so perhaps they were attending.Ha! That's exactly how you get them to listen. Well done.

And the student-newspaper headline is priceless.

In a day when most commencement speeches are about politics, fame, or financial capital, it is really wonderful to see you engage in such a warm and pleasurable opportunity, and of course your words graced the ceremony. To echo Wynken de worde, "mazel tov!" Have fun in the Keys!