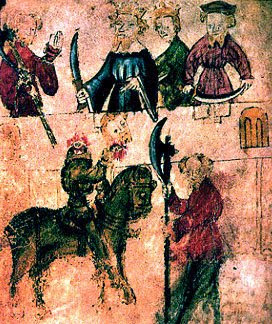 As a wee graduate student I took an independent study on Middle English romances with Larry Benson. Because this was back in the Olden Days, Benson was allowed to smoke furiously as he expostulated on all manner of topics, some of them actually related to romances composed in Middle English. Chris Cannon and I would feed him the occasional question, but mostly we just watched his performance unfold. A highlight: Benson would often place his cigarette in his mouth backwards, and we had a running bet on whether he would ever light it in that position. He never did, but he often came perilously close.

I will someday die of cancer from all that secondhand nicotine nebulosity. I did, however, learn quite a bit about Middle English romances and assorted contingent topics.

Here are two "facts" absorbed in that smoky study, facts that have stuck with me for reasons I still cannot discern. I have no reason to believe that either is true, and yet ...

Posted by Jeffrey Cohen at 7:46 AM

Although I never smoked or drank whiskey, I really do miss those days. I love the old television shows where the doctor comes into the examination room smoking a cigarette. Yes, those were the days.

I often get the feeling mid-class that my students would just love me to unload on them exactly these pieces of information, and yet I refuse. (It feels like a tug of war with them, one happening only in my head.) Even if lung cancer's no longer a threat to today's students from their professors, such encounters seem likely to produce unwanted side effects.

A comment I will one day regret: I have lit the filter of a cigarette before. Never in my office and never before 2am, but still.

Odd how I so often remember the atmosphere and mannerisms of people in a classroom rather than the actual content of what was being learnt or taught. Like the great professor who slowly and methodically cleaned his pipe while methodically expounding on some great issue while the other professor punctuated his monologue with the odd short dissenting comment. Me I watched the dust drifting through the meagre sunlight and wondered how (in my torn red maxi skirt and affro hair) I came to be sitting in this cloistered room of tweedy men.

and of course am still there

Sarah and Myra, you do both make me wonder what mannerisms and what indulged temptations of mine my students have emblazoned on their minds. I am guessing something about bad jokes and knowing looks, but then again...

OK, since I am avoiding doing comments on faculty annual reports, I will add one more professor's mannerisms that made a deep impression on me. As an undergraduate I took a philosophy course that attempted one of those crazy Pre-socratics to Nietzsche surveys. The class was large (more than 100 students), and the professor would begin by heating a mug of hot water via an electric immersion coil and, as he lectured, brew and then drink a cup of tea. He could perform this ritual without ever glancing at the apparatus, keeping his eyes focused on us and his mouth moving with stories about Empedocles and Spinoza. One day, though, his attention did wander -- and he spilled the hot tea all over the table top he was perched upon, scalding his buttocks.

I had an 8th-grade English teacher, Mr. Tuell, who drank bourbon out of a thermos and pretended it was coffee, but we all knew it was bourbon. Halfway through many of our classes together, he would often stare wistfully out the windows and say, "it's such a lovely day; how can we sit in here and read Hemingway [or whoever]? Why don't you go outside?" And we would. I miss him.

One of my Religious Studies colleagues is admired by his students for the way he fills up a mug of coffee in his office and then walks across campus with it to class, drinks it in class, and never spills a drop. I am completely humiliated by this. This is, of course, the reason students give for finding this professor "so cool" (though I know for a fact he's cool in many ways, all of which doom me).

I'm reminded of Roy Battenhouse who was an obsessive chain-smoker. He actually would light the end of a new cigarette with the old. And Fritz Whitehall who would dump his glowing pipe ashes in the hallway of Ballantine Hall at IU, creating trails of burn spots up and down the hallways.

I, too, wonder what tic my students see. As an undergraduate at the University of Rochester, I had a teacher named Joe Frank. He had a habit of repeatedly unbuttoning and buttoning his sport coat. It was common for us to count the times and to place hash marks at the top of our notes. Some years ago, I found those notes with the counter marks and they brought back Frank and those classes poignantly.

I wrote my undergraduate thesis on Gawain - the story I cited to disturb people is the scene (I think it's in the Turk romance) where the unscrupulous king attempt to kill Gawain off by forcing him to play tennis with a giant brass tennis ball. (It reminded me delightfully of the ridiculously complex and idiosyncratic plots villains always devise to exterminate James Bond.) Years later one of my friends (a medievalist) wrote to me and said, "am I making this up, or did you tell me..." so I know it was memorable/ludicrous to others beside myself, and made reading the rather ghastly Turk text worthwhile.

As for Benson, I'd happily endure second hand smoke (or brass tennis balls) to have taken a class from him.

I love that text! Thanks for reminding me about it, bioephemera. And thanks (I will say it here) for posting recently on glowing green animals. I am doing an essay for a collection on Kac and his work so I have been collecting references to artificially luminescent creatures.