What "Myths of Britain" Was Really About 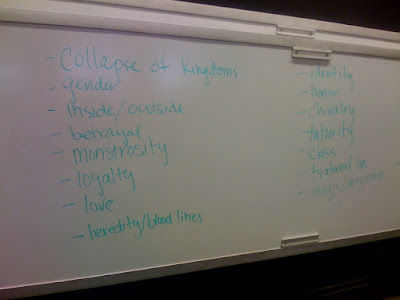 This semester I am teaching what has become my favorite course in my rotation, Myths of Britain. A possible gateway to the major as well as a popular way to fill humanities and writing requirements for non-literary types, the course is founded upon a principle of slow readings of a small number of texts. I like to think of the class as one in which students who have grown up multitasking can catch their breath and linger over some especially rich medieval and early modern works. Texting, Facebooking, Twitter and the like have their place, but participation in these frenetic activities can obscure the pleasures of close reading, of being with texts so complex that they can withhold their rewards from those who do not yield them sufficient time.

I offered the complete syllabus in January. As you'll recall, the spirit of the course was summarized as follows:

Much great English literature turns out not to be so English after all: the action of the epic Beowulf unfolds in Scandinavia; King Arthur was a Welsh king before he was an English monarch; Shakespeare's Tempest takes place on an island in the Mediterranean, but the play is also about the colonization of the New World. "Myths of Britain" looks at the early island within a transnational frame. We explore literature as both art and a way to imagine social and individual identities. Students will enjoy works like Seamus Heaney's version of Beowulf; various versions of the Arthurian myths; the lais of Marie de France; and two plays by Shakespeare.

And it was in that spirit that I thought I was speaking with the class's ninety students over the course's twelve weeks. Yesterday's review session therefore surprised me. My three amazing and wonderful TAs were leading the class. They asked the students to call out the themes of the course. The snapshot (above) is the collected data on our white board. Do you see the words "transnational" or even "English" and "British" there? Anything about geography? Nooooo. But chivalry and class were shouted. Monstrosity broke into the hall. Love, too, as well as love's brother, fraternal love. The word that surprised me most, though, was futurity. The course was not especially forward-looking; in fact, just the opposite. But once that theme was offered I realized that we have spent months tracing the possible futures of the British Isles ... and in a way, through our constant focus on the inexhaustability of the imagination, the possible futures of we ourselves might embrace.
Posted by Jeffrey Cohen at 10:29 AM

Oh yes, "futurity" is a positively inspiring response to such a tantalizing buffet. Some of your students will be living these texts for the rest of their lives--what, what could be better than that?

I love all the texts you've covered here. But I'm especially interested in your reaction to teaching SGGK using Armitage as opposed to Borroff.

Matt, I am happy enjoyed it!

I was hoping that Armitage would do for SGGK what Heaney did for Beowulf, but that was too much to hope for. Armitage's translation does give more to talk about than Borroff (I've been using hers for 15+ years, and it is is perfectly fine, but not exactly beautiful), but it did not transform the experience of teaching the poem as I had hoped.

This makes me endlessly excited (and rather sad to have finished my own teaching today). I, too, like the idea that there's a kind of futurity in the texts you chose for your class -- the idea that possible futures inhabit texts in such a way that they can still be accessed even after history, as it were, has run its course (which of course continues on from each and every instant).

Medieval futurity -- as a good thing. I like that possibility, too.

Also: I've mentioned I'm jealous not to have taken a class like this as an undergraduate, right? Because yes, I am definitely extremely jealous of your undergrads.