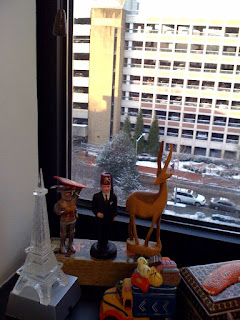 [the Tiny Shriner upon his new sill]

I'm writing this post from my new office on the sixth floor of the Academic Center of the George Washington University. A small change in geography, I know: just one floor down from where I used to work. Yet the move marks something more profound, the end of almost four years of leading my department.

I enjoyed that time far more than I would have predicted. Something about being in the middle of things was exciting; something about being able to make a swift, positive impact on the lives of friends, colleagues and students was deeply satisfying. I went from working on problems that have no solution (that's why I research and publish on vexed issues like human identity) to being faced with crises that I could often quickly solve. Now, though, I've relocated from a room through which everyone passes to a slightly out the way space, eerie in its quiet. The office was most recently used by Edward P. Jones and José Muñoz, but because their residencies lasted only a semester they did nothing to personalize it. All I've manged so far is to place books in the shelves and to turn its old desk slightly askew (I've always placed my desks at an angle, throwing off the symmetry of the room. It's not good feng shui, but it does place visitors noticeably ill at ease). I'm living with bare walls and mess of folders.

So I've entered the next phase of my professional life, and feel fortunate indeed to have made it this far. This year's horrendous MLA and the disappearance of what has always been a meager job market have been a constant reminder that as bad as things were in the 1990s (and the 1980s, and the 1970s), they are even worse now. I've been thinking a lot about roads not taken and futures not realized. I finished my PhD in 1992, having completed the thing in five years (compelled into acceleration mostly by my self-absorbed unhappiness with graduate student life). I was fortunate enough thereafter to have a non-tenure track job in an interdisciplinary undergraduate program called History and Literature for up to three years. It did not pay much (three-fifths of a full time salary, or about $16K, with no health benefits), but the position did allow me to have a shared office, intellectual companionship, good students, and a place in which I could decide what to do with my own ambivalence about being an academic. Every year I went to the "Non-Academic Jobs for PhDs" workshop held by the Career Center, and every year I realized how much more certain I had become that I wanted to spend my life teaching and writing.

I decided I would give the job market three years. I didn't have enough soul to be ground out of me to last beyond that. I'm not sure what I would have done had I not, in the final year, actually landed a tenure track job: perhaps something with computers and the web, since I had become so interested in technology and scholarly community. Fortunately, though, GW offered me the medievalist position that I am happy to hold today.

My fifteen years (!) at the George Washington University make me feel I entered a time machine. I worked madly for tenure, and felt fortunate to have the support at every step of great colleagues; became involved with an interdisciplinary program in Human Sciences; labored to obtain fellowship money and research release; received my terminal promotion; and in a turn of events that surprised no one more than me, became chair. I've spent the past years doing the many things for which I have never been trained: managing people; working with a complicated budget; ensuring administrators whose job it is to botch things left my department alone; removing cash from the wallets of people who did not expect to become philanthropists.

And now, it's over. I'm in my quiet office quietly working on my syllabus, and wondering why I am no longer receiving 20 emails per hour. It's not a bad thing; it is almost restful. Almost. But I am still director of GW MEMSI; there are still administrative tasks to perform. I'm looking forward to having more energy to put into my teaching and research.

I'm looking forward to at last being able to catch my breath.
Posted by Jeffrey Cohen at 9:24 AM

This is actually a really reassuring post: after seeing so many of the people I know in the US history blogosphere apparently buried in service work, to see one of them at least reach the calm beyond the storm is a welcome promise for the eventual future. Thanks!

The calm is the promised land, and I haven't quite arrived there yet: I am helping with another department's search in the spring, have a task force's work to finish up, and there is MEMSI. But at least I am not doing all these things while being chair!