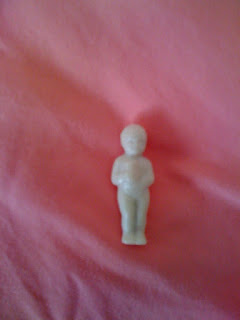 My family spent part of last summer living in Paris. We rented an apartment near the Rue Mouffetard from a professor of 19th C literature at the Sorbonne. My kids loved the city for its food, its art, its mode of life, its parks. I've written a bit about our visit to the Mémorial de la Shoah, and we did eat at a deli in the Marais ... but like most old European cities Paris is place whose Christianity is inescapable. I wouldn't be much of a medievalist if I were surprised that cathedrals had shrines to saints and Virgin Mother altars and stations of the cross within. These religious artworks always startle my kids, though -- especially Katherine, who at five remembers the gelato we ate in London a few years ago but not the many churches we explored.

We'd been sailing boats in a fountain of the Jardin de Luxembourg and decided to make a visit to nearby Saint-Sulpice. At the Louvre earlier in the week Alex had declared himself an admirer Eugène Delacroix, partly because he recognized Liberty Leading the People from the cover of his favorite Coldplay album. Saint-Sulpice has some murals by Delacroix, including a spectacular envisioning of Jacob wrestling the angel. We were gazing at that image in the dark of the church when Katherine called us away. "What's this?" she asked, pointing to a depiction of a man leaving a tomb. My wife shrugged her shoulders and said to me "You can explain it better."
"Well, " I said to Katherine, "Christians believe that Jesus--"
"Who's Jesus?"
"Their messiah."
"Their what?"
I tried a different tack. "The person they pray to ..." She nodded. "Christians believe that after Jesus was killed on a cross and placed in a grave, he came back from the dead. It's called the resurrection."
Katherine jumped from my arms and ran from the mural. "He's a zombie!" she yelled as she retreated. She had no desire to see the picture any more.
Well, that really backfired, I thought. It didn't help that her older brother had been scaring her with nightly tales of the undead. But Christian narratives like the Resurrection are not yet part of her cultural literacy, and I am not always the best interpreter for her, as my stumbling shows (in retrospect I'm fairly certain the mural depicted Lazarus rather than Jesus). But the episode did make me think about how much we take for granted -- or perhaps, how much I take for granted -- when it comes to the Christianity of the Middle Ages. We tend to assume that the stories behind the images were always well known, and that such narratives caused universal nods of assent rather than the shaking of a head in disbelief. We comb through the Patrologia Latina to discover what people really thought, to trace the coherence of orthodoxy, but we often don't leave enough room for what John Arnold calls unbelief, for what might also be called wonder. Sometimes I think that Jews became such figures of danger to Christians because they brought to presence the ability Christians surely had to be astonished by themselves.

Addendum: We are good friends with a family from Mexico. Last week they gave us rosca de reyes or "three kings bread." Into this cake has been placed a baby Christ figure. Katherine was poking around her piece and declared "I think they forgot to bake a Jesus in the cake." Suddenly a small, white plastic doll toppled out of her slice. At first she was happy, thinking she'd won a prize. Her brother told her, though, that the person who finds the figure has to cook the tamales for the family for the year. Now she keeps it by her bed and calls it ... the zombie baby.

Posted by Jeffrey Cohen at 9:54 AM

Great posting. This story makes me think about formative head-shaking moment I had re: Christian belief. I had a mainline Protestant upbringing and the first time I realized there were any significant doctrinal differences within Christianity was when learning about the Reformation (high school history course). The teacher explained transubstantiation and I reacted with surprise: "Wait, Catholics believe the bread is LITERALLY the body of Christ?" The teacher started to explain things in detail and eventually a Jewish classmate interrupted: "Wait… you guys actually EAT Jesus?"

Great point about wonder - seems to me you must have in mind Mandeville's wonder re: 'strange' religious practices (even within varieties of Christianity). I think the field would be quite different if we all looked to Mandeville to discover "what medieval people thought" about the world.

As a practicing Irish-Catholic with an offbeat sense of humor, I've always been stunned by the inability of many people, Christinas included, to see the humor and quirkiness in Catholicism (and/or Christianity more generally). If Jesus' first miracle was turning water into wine, I can't see any reason why everyone isn't Catholic! ;-) (Also, yes, transubstantiation might be strange, but we should remember that communion used to happen exclusively at a bar. Again, no gripes there, as I commune regularly at bars of all kinds.)

On a slightly more serious note, I'm always frustrated by the way that critics of Christianity fail to see the fact that wonderment is built into the religion--that everything is not explained, that mysteries do exist, and that none of that is inherently bad. The secular world--to conjure a really clumsy binary distinction--is mysterious, too, and we all spend our lives trying to sort out so many of the mysteries there--mysteries that are inherent in being alive. In short, the two aren't always as exclusive as many would have us believe, I would argue.

Having been raised Catholic, but not in any seriously dogmatic fashion [my parents mainly seemed blase and somewhat non-committal on the question of God and religion, and we went to Church sporadically], this post caused me to reflect on all the ways in which some of the more outrageous aspects of *all* religions appear mainly banal to those of us who are exposed on a regular basis to a particular religions rituals, liturgy, stories, etc. from an early age. After a while things like Christ's resurrection, which struck your daughter as both horrifying and fantastic, feel ordinary and ho-hum [which is likely *not* how they should feel to us, if we were more devout, perhaps]. The trick, with any religion or faith, I suppose, would be to maintain a sense of wonder over the so-called "miraculous," no matter how many times repeated in what comes to feel like monotonous ritual. The same is true for the secular world. This is no easy feat.