The Future of the Jews of York 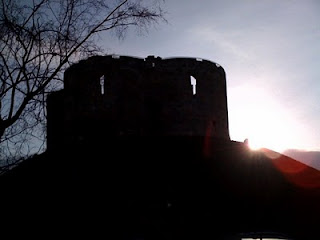 by J J Cohen
As promised, the paper that closed the York 1190 conference last week. This isn't quite the version I gave, as I altered my remarks through some late handwritten editing so that I could better bring together what had been said in the preceding sessions ... but it is fairly close. For reasons that will become clear when you get to the last paragraph I wanted to get it up here at ITM today.

You may recognize some sections of the paper. The opening is lifted from my introduction to Cultural Diversity in the British Middle Ages; the sections on the mocking Jew of Oxford and the mapping of Hugh of Lincoln's threshold-crossing are from my Leeds plenary last year. I hope I've brought them together, though, in a novel way.

One more note, on theory. Given the audience and the themes of the conference, it didn't seem to me the most useful place to be citing the theorists who helped me to formulate my questions. If you detect some Judith Butler, Elizabeth Grosz, D&G, and especially Graham Harman, Bruno Latour and Michel Serres in here, well, you have a good ear. But just as important to this work are the scholars who have been rethinking Jewish-Christian interaction in the Middle Ages mainly from a historical viewpoint: Malkiel, Biale, Einbinder, Yuval, Elukin, Boyarin, Horowitz... So, the following may strike you as uncharacteristically historicist; I don't know. But I am eager for your comments.
------------
The Future of the Jews of York

Neither will stone stay in its place at any point in William of Newburgh's narrative. Book One, for example, includes a stone architecture erected upon the field of Hastings that exudes fresh gore after each rain; the walls of Ramsey Abbey run with real blood (verum sanguinem sudarunt) when Geoffrey de Mandeville seizes the building; Green Children emerge from the ground near Woolpit, and one of them refuses assimilation to a new English life; a huge rock in an unnamed quarry is split open, revealing two smelly, hairless greyhounds living inside. The Bishop Henry of Winchester adopts one as a pet. Possessed of an astonishing appetite, it lives for many days. In another quarry workmen discover a beautiful “double-stone” (lapis formosus duplex) with an even more marvelous creature within:
While they were digging very deep for materials for building, there was found a beautiful double stone, that is, a stone composed of two stones, joined with some very adhesive matter [ex duobus subtili agglutinatione compactus lapidibus]. Being shown by the wondering workmen to the bishop, who was at hand, it was ordered to be split, that its mystery (if any) might be developed. In the cavity, a little animal [bestiola], called a toad, having a small gold chain [cathenulam auream, a pet’s chain] around its neck, was discovered. When the bystanders were lost in amazement at such an unusual occurrence, the bishop ordered the stone to be closed again, thrown into the quarry, and covered up with rubbish for ever. (1.28)
The nameless bishop seems not to like the astonishment that possesses the workmen upon discovery of the doubled stone, the amazement that takes hold when the conjoined rock is cracked open to reveal dwelling at its secret interior a creature of art (the gold chain) and danger (toads were considered poisonous). He has the stone resealed  -- but with what? Once broken, can the two stones become one really be restored, can they contain the unprecedented and living phenomena which has been revealed as inhabiting their interior? A toad with a golden chain, sent into the future as the gift of two mutually dependent spheres, received by an uncomprehending but wonderstruck audience, returned to the depths of the ground by a bishop who cannot thereby end the life of the astonishing story that has already escaped from that rock, even as the being at its interior is consigned to the prison of the earth: what message does this prodigy convey about the future of the Jews of York? What message does it yield about history as discovery, inventio? Why intentionally destroy the beauty and challenge (no matter how enigmatic) of that which arises when worlds acknowledge their agglutination, their generative and irrevocable conjoining?
Giving the Jews of York a future means not just de-coupling their narrative from lachrymose history, which always knows its answers in advance, but also by allowing their narratives to live within a wider, more capacious context: here, by not isolating the Jewish section of William of Newburgh’s narrative from its embeddedness in the History of English Affairs. Just as Christian-Jewish neighboring unfolded in shared urban space, coinhabitance must be textual: neighboring is literal (Jewish stone houses with Christian stone houses) as well as literary. Jews share space in William’s book with a host of Others: Scots, Saracens, the Welsh. His world is wide. They also textually touch Other Worlds, where we behold stones yielding wonders, Green Children from a distant land who do not eat English food, sport English skin, wear English dress, utter English words ... and yet, when they do speak, prove not wholly alien.

Might these lapidary tales hold the promise of some strange beauty, some unfamiliar future, that the dominant narrative will not yield?
I want to end by returning to the story of stone with which I began, the Yorkshire hill within which an uncanny people celebrate an evening feast. The familiar landmark is rendered queer when the passerby observes through an open door (januam patentam) a feast in progress. Inside the mound the traveler can see a table at which men and women are reclining, “as at a formal feast.”  A servant spots him at the doorway and offers him a cup. The man takes the goblet and flees, leaving himself only a story of an invitation declined. The feast not enjoyed seems to me a refusal by William to recognize another possible narrative, one in which a passing Christian might have shared an alien table. Perhaps it is too close to Passover, perhaps I am reading this too much like a Jew, but the door left ajar, the reclining at the formal table, the ready cup: all that is missing is matzoh and bitter herbs. Does this feast not seem to be a seder, the door and the goblet ready to welcome Elijah? Of course it could not be, it isn’t, it’s Welsh or it’s Irish or it’s something but not Jewish … yet this unexpected possibility of commensality, opening in Yorkshire in a space William knows well, opening in the heart of William’s own story to perplex him, to offer an invitation to him – an invitation not so much refused as miserecognized, an invitation still enduring. Does not this invitation not still proclaim, Another world is possible?

I do love your paper and I can see perfectly why it needed to go up in time for the Pesach Seder. Historical footnote though: the cup for Elijah is a 15th century addition to the Seder liturgy. It is not found in any of the older Haggadah manuscripts, many of which preserve "stage directions" (some in vernacular) giving us a fair idea of what people actually did during the seder. still, beautiful ending.

I have no words to add or way of commenting. But thanks, I learned some things and enjoyed the paper very much.