An experiment in peer review 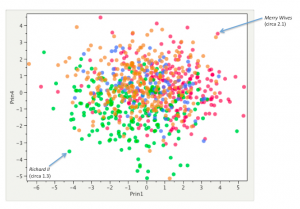 I'm just back from Siena and Florence, so today is dedicated to laundry, financial matters, email, and spending time with the family. And I'm tired. Wendy and Alex waited up for my me even though my plane was delayed by the French air traffic controllers on strike, a towing truck that broke with our aircraft attached to it, and storms along the US East Coast. Katherine popped out of bed early to see what loot I'd returned with (a Ciao Bella pocketbook, three Smurfs, and some fish shaped chocolates). So far I've done little else besides catch up on what needs to be caught up, and eat spicy foods, since Italy has great cuisine but only the weather there will make you sweat.

Anyway, check out this experiment in peer review undertaken by the Shakespeare Quarterly under the guest editorship of Katherine Rowe. The approach is called "partially open" or "hybrid" review, and has not been undertaken previously by a prominent humanities journal. Here is the experiment as described by the latest Folger Research Bulletin:

In this issue, Kate Rumbold explores how the Globe Theatre, British Library, and other institutions are embracing new media outlets to promote themselves and how this changes their traditional roles. Jonathan Hope and Michael Witmore describe their "iterative criticism," identifying frequent word combinations and text-tagging programs to unpack Shakespeare's genres. Ayanna Thompson analyzes the role of youth culture and racial identity in YouTube appropriations and adaptations of Shakespeare by high-school students. And Alan Galey discusses the "virtual Shakespeare text," tracing its emergence from bibliographic studies, information theory, and computing.

The site hosting the issue (mediacommonspress) may be accessed here, and is well worth your time if you'd like to contemplate what the future contours of scholarly publishing. The online portion of the review attracted 41 participants and 350 comments. As Kathy Rowe writes in her introductory essay: "To refuse to reflect critically on, reformulate, and reaffirm the value of our discipline in an electronically networked world is to court irrelevance ... Whether we ourselves blog, vlog, tweet, or don’t, our classrooms convene a generation of born-digital students." The general discussion is ongoing. Wouldn't it be great to try this for Exemplaria, postmedieval, SAC, JMEMS ... ?

This is extraordinary stuff, Jeffrey. Thanks for posting it. I've not quite understood yet the opposition to peer review, or blind review, or the various other traditional systems of review, although I'm beginning to understand the arguments that they tend towards the antidemocratic and the service of an old boys' network (whatever the age or gender of the boys). But I also think that the minimal comments from reviewers (who, after all, have only so much time to volunteer) are probably just not enough most of the time. An open review of this sort would provide the kind of mass expertise that could go a long way towards producing not only more democratic forms of scholarship but also BETTER scholarship.

I'm a BIT disappointed that the essays so considered are themselves concerned with material that's so 'of the now.' I suppose it's a natural fit, but I look forward to seeing this done with, say, paleography, numismatics, or whatever you believe hoary scholarship to be taking place.

Welcome back. We too encountered the East Coast storm in our flight. It was terrifying.

We're going to do something similar to this in the "Becoming-Media" issue of "postmedieval" being co-edited by Jen Boyle and Martin Foys in 2012. I can't say more about it yet except to say that this particular issue of the Shakespeare Quarterly *inspired* their idea. Stay tuned! Of course, I think what SQ did is simply brilliant [if at times, I assume, exhausting to read/take in all at once?].

Thanks so much for putting this up, Jeffrey; we're very excited about this issue and hope to get a lot of responses to it.

Jeff, thanks so much for the thoughtful digest. For folks (such as Eileen) interested in testing this ground in similar ways, I'd be happy to share the insights gleaned from our experience at SQ, if that's useful.

Kathy, we'd love to feature your reflections on the SQ open peer review process here at ITM. Would you consider doing a guest post?

Something to add, after reading Jennifer Howard's article in the CHE today about this experiment: none of it could have happened without the expertise and support of MediaCommons and Kathleen Fitzpatrick. Her experiment with Planned Obsolescence was a model for us and Chapter One of that study (on the history and future of peer review) is essential reading for anyone considering undertaking such an experiment.