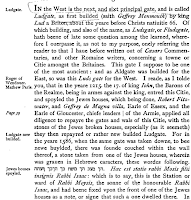 For thoughts on NCS, please continue reading Jeffrey's post below, late edit, Derrick Pitard at "Gladly Wolde He" for late medieval devotion at NCS, and, as well, Miglior Acque, who writes:

the highlight of the conference, and certainly among the conference's most important papers, was one that was never mentioned again. This is most curious considering how much time we spent talking about manuscripts, theorizing about manuscripts, salivating over manuscript illuminations. Estelle Stubbs gave a paper on the morning of the first day in which she identified the famous 'Scribe D' as John Marchant. The importance of this scribe in copying work by Chaucer has always been recognized, but his identification now allows us to place this copying in a much more specific context (and Stubbs threw the Guildhall into relief in this respect). It was a groundbreaking piece of work, compellingly and elegantly presented, and should have been the talk of the conference.

Now, back to me.
If you were up at 9am on a Siena Monday, and decided to head out to the train station, you might have heard the latest work on my continuing Erkenwald project (earlier versions here and here). The paper? "The Past as Past is its Disappearance: Erkenwald and the Jews": the interested may look for the whole paper elsewhere, but my argument, in essence, was to assert that the past Erkenwald creates (and erases) is not only pagan but also (what it figures as) Jewish, and that it figures this Jewish past as past (which is to say static and ultimately untouchable by the 'present'). I offered only an implicit connection to the "Touching the Past" theme. To elaborate more, briefly: it's Erkenwald v. Faulkner.
Some evidence:
Read on for the Muslim question!
The converted temples of Erkenwald's opening also include these: "Þat ere was of Appolyn is now of Saynt Petre, / Mahoun to Saynt Margrete oþir Maudelayne" (19-20, that which was dedicated to Apollyon [or Appolo] is now dedicated to Saint Peter, and Mohammed to either Saint Margaret or Magdalene).

I'm asking you, blog readers, lurkers and otherwise, to weigh in. As Sarah Salih asked (and I paraphrase: apologies for memory slips), in Erkenwald's grand narrative of past and present, of creating the past and separating it from what it wants to be present/presence, what do we make of the continuing present of Islam, this most recent of world faiths, situated here in the distant past of London as it is situated in the now of Christianity? What to make of these, given my arguments about the "past as past"? No doubt Mary Kate's paper on Chaucer and the Anglo-Saxons could help here.

My answer was, I have to say, a bit weak. I had read "Synagoge" closely, so in all fairness I couldn't just read past the Mohammed reference. So: I answered by speaking of the poem's "Islamic idol" as further figuring the inability to close off the past as past; more simply, the Mohammed reference might suggest the resolution of all non-Christian faiths into one homogeneous glob: pagans, Jews, and Muslims are all equally lost; alternately alternately, we might understand that Erkenwald grants Islam an antiquity medieval Christianity tended to deny it, thus undercutting one of the key arguments against Islam, namely, its newfangledness.

Surely, though, there's more that could be done?

(postscript: for the image, above: I read Erkenwald as medieval kindred to John Stow's early modern account of a discovery made during repairs to Ludgate in 1586: here, mixed in with the supposed remnant of London's legendary foundation by the pagan King Lud, workers discover a stone “grauen in Hebrewe caracters,” the very image of what Christianity understood to be its foundational, superseded past.)
Posted by Karl Steel at 11:56 AM

I always risk saying nothing new in these conversation, because of approaching from the wrong side of the disciplinary fence, unaware of what is already a well-established weed and what's new planting. But, if I may lean over that fence and opine for a minute, this is quite a weird presentation of Islam. It makes Muhammad himself the godhead, whereas most writers who were aware of Islam knew that Muhammad had been a man, and were all too keen to point out his human failings so as to invalidate his prophecy. Here he is converted to a pagan idol, thus, as you say, lending him false antiquity. It makes me wonder if 'Mahoun' is even Muhammad at all but instead perhaps a scrambling of Mammon. If it is Muhammad, I think all that one could say is that the author was uncharacteristically uncaring about his chosen archetype, which given the rest of the work seems unlikely.

Karl Steel said...
This comment has been removed by the author.
8:06 AM

I'm noting in the Middle English quotations that the word "synagogue" tends to turn up frequently in connection with these "Islamic" idolaters. That, I'm afraid, is where my reading might falter, so what I need to do over the next 6 months, before I do the next version of this paper, is find a way through this particular problem of the conflation of paganism, Islam, and Judaism, both in this poem and in--with all due provisos--medieval Western Christianity more generally.

I don't have anything smart to say, other than what maybe was said already (by Michelle Warren?): that "the resolution of all non-Christian faiths into one homogeneous glob: pagans, Jews, and Muslims are all equally lost" has good precedent. When Charlemagne smashes Saragossa in the chanson de Roland, he shatters the statues and idols that his Christian army finds in both synagogues and mosques. Thousands are forcefully converted thereafter (with the exception of the queen, who must be converted through love...)

This moment in Erkenwald seems, possibly, to be similar to how some travel writing charts the space of the Holy Land. Where the current moment of the Holy Land controlled by Muslims disappears in favor of describing the cultural past (the past made present), Erkenwald conjures away the present again by focusing on the past, this time remembering Mohammed rather than forgetting him. But in the remembering, he is consigned to a conquered past.

Not sure if that point makes sense, but basically I'm saying that the pastness of the past here in Erkenwald might represent the same sort of desire present in ignoring the present in travel writing. I might be off base though--I blame my malfunctioning espresso machine for the half formedness of these thoughts!

Rick, that's great. I'll have to mull that over, but it makes total sense to me, and I think it works well for the dynamics I see at work in the poem. I just wish I knew the ME travel writing better.