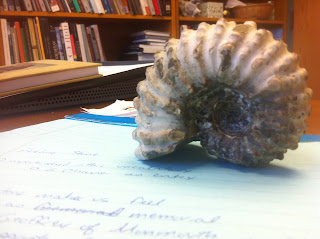 Yes I should be writing that "Feeling Stone" talk, but then again I have 15 hours locked in an airplane journeying from Los Angeles to Melbourne, and what else am I going to do? Watch movies? Sleep? Please.

Well, maybe I should at least have a draft. Here is a picture of my desk this morning as I attempt to harness the powers of an extinct marine creature become a rock. Ammonites are fascinating: Pliny gave them their name (ammonis cornua) because they look like the horns of a ram (Ammon was an Egyptian god who was sometimes depicted with horns, or so says Wikipedia). They survived a good 300 million years before they vanished. Neolithic tombs like Stoney Littleton worked them into their decoration, seemingly an art born of stone itself. Fossils will make a minor appearance in this talk, which contains a section on stone as an artistic agent.
Posted by Jeffrey Cohen at 8:49 AM