My lithic ecologies have grown boring to everyone at this point, so read Eileen on elegiac urboceanic expanses first. Below, afterwards, please find some writing that I'm trying to finish before my mind is seized wholly by thoughts of the undead, the topic of my IAFA conference keynote. On a related topic, do you realize the The Walking Dead series is the most trenchant critique we possess of race, class, and regionalism in the contemporary US?

Zombies are of course a natural lead in to John Gower, since Shakespeare resurrects him, Frankenstein like, in Pericles. Remember the famous prologue where he shrieks "From ashes ancient Gower is come!!" and then tries to find some brains to eat? Despite having once sworn that I would never write on Gower because of the secret society that has formed, cult-like, around his sacred memory ... well, let's just say that I am filled with lies.

Below is the introduction to the final chapter of my book, the draft of which I am shaping even as we speak. In this very blog post, in fact. 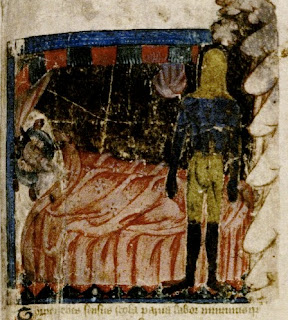 Now held in the Bodleian Library, the Fairfax 3 manuscript of John Gower’s Confessio Amantis contains on its opening page a vivid illustration of an episode narrated later in the poem’s prologue: the biblical king Nebuchadnezzar is dreaming in bed (fol. 002r, upper left corner). A tall man, seemingly composed of a variety of materials, looms in menacing stillness over his sleeping form. This figure’s face is turned towards the slumbering king and thus cannot be discerned by us. A craggy boulder levitates behind and above the bed, at eye level to the standing form. As we read the poem itself (Prol. 585–880) and perhaps recall the story told in the Book of Daniel upon which it is based, we realize that this rock is hurtling, meteor-like, from the side of a mountain to a fateful rendezvous with an immense statue haunting Nebuchadnezzar’s sleep. The stone, small because approaching from such distance, will smash the strange form to dust “With which ston al tobroke was … al was into pouldre broght” 621, 623). Gower follows Daniel in describing the statue as a monstrous embodiment of human time, smashed when “A gret ston from an hull on hyh / Fel doun of sodein aventure” (618-19). This knowledge makes the illustration come to life. The rock becomes kinetic and perilous: the boulder hurtles towards the bed, towards the menacing statue, and therefore towards us.

The materials from which the image is wrought represent human epochs, each a deterioration from the perfection of the Golden Age (represented by the statue’s shiny head and neck) through the silver and brass of its middle portions to the unstable mixed materials (steel and clay) of its feet, which signify the troubles of the present. The speeding rock possesses a steadiness that degenerative and hybrid human temporality lacks (“Whan that the world divided is, / It moste algate fare amis,” 645-46). Lithic force will shatter the Anthropocene to dust (“pouldre”), so that in wake of apocalypse a better world may begin (658-59), one destined to endure outside of time and, presumably, body. The devastating stone, Gower declares, is an allegory for God’s “myht” (655). What the rock triggers includes the fall of Babylon, the decline of humanity, and the end of human time. Yet the stone is also quite materially a stone. As Daniel makes clear in the Vulgate, the rock is cut from the mountain by no hand (abscisus est lapis sine manibus, 2:34). It destroys the statue so utterly that nothing remains but dust conveyed by the wind, and then it grows to replace the world it has obliterated: lapis autem qui percusserat statuam factus est mons magnus et implevit universam terram (“but the stone that struck the statue became a great mountain, and filled the whole earth” Daniel 2:35).

The illustration of Nebuchadnezzar’s dream in Fairfax 3 demands an allegorical reading. Gower’s Confessio Amantis is, after all, a story about the power of story. Yet this vividly colored rectangle of human forms that are immobile (a sleeper, a statue) and a rock that hurtles towards the scene from some invisible destination is also a window into a world where not every lithic narrative must yield to anthropocentric fable. What if we, like the narrative, allow the stone to grow until it replaces the world it obliterated? What if this lithic world were not an earthly kingdom (as it seems to be in the Book of Daniel) nor a metaphor for heaven, but a world that is simply posthuman? The Confessio after all stages a struggle over how to comprehend narratives. Can we glimpse such a parliament unfolding in the rock that speeds towards the dreamer and the anthropomorphic statue that haunts him? Could this rock be Theia, the Mars-sized planet that may have collided with the earth to form the moon? Chicxulub, the asteroid that triggered the mass extinction leaving the earth bereft of dinosaurs? Melancholia, the giant blue planet that crushes the earth in the Lars von Trier film of that name?

Of course Gower could not have dreamed any of these errant stones, and yet his rock might be, like them, a protagonist rather than prop, an actor rather than a symbol, a material force rather than human shorthand for divine might. Sine manibus: hurled by no hand. What if motion belongs to the rock alone?

A perverse reading, perhaps, given the humanizing interpretation that Gower and the Book of Daniel offer – but not an anachronistic or impossible reading. Following Gregory’s Moralia, Gower writes that humans are a microcosm (“lasse world”): like angels in possessing souls, like beasts in possessing senses, like plants in being able to grow, and like stones simply in their being (945-953). Stones don’t do very much in such a relegation. Yet sometimes, as other medieval authors knew well, stones move, eat, even procreate. Stones open themselves to reveal queer ecologies, unexpected and inhuman worlds. Hurling from a mountain to destroy the composite statue that is frail, human time is a rather small action in comparison.
Posted by Jeffrey Cohen at 2:37 PM

You've done it now, Jeffrey. Gowerians are consulting in secret places. I think your reading appears less "perverse" or surprising when considered in relation to Gower's fifteen starts, stones, and herbs (CA VII.1281ff), for example. Gower's foray into the hermetic arts and macrocosmic bodies, though always tied by way of resemblances or powers to the human, at least points outward way, way past the human.

So interesting to see your take on this "ymage," Jeffrey! I like the way you are reasserting the "lithic" agency within Gower's account of N's dream; I feel the general tendency is to think about the materiality of the "ymage" with its disparate elements/materials, and the fact that this entire statue breaks down - but the role of the *stone* that actually destroys this "ymage" is something I've never seen discussed in quite this way. Allan already beat me to the punch re: herbs and stones etc. in CA Book 7. I'd just say, given your interests, you might take a look at Deanne Williams' discussion of this "ymage" in Daniel as a hybrid monster, if you haven't already?

As far as I remember, Williams doesn't address the lithic or (poly)temporal elements of Gower's "ymage" episode per se, nor does she really think about lithic motion. It's pretty much, as I remember, presenting the notion of this "ymage" as an emblem for the whole CA as a hybrid creation (indeed, this image is often a "frontispiece" to the CA in some mss, which would seem to support such a reading).

Other Gowerians can chime in here, but I feel that Gowerian stones are often his poetic vehicles for thinking through processes of change and transformation *in general.* In that respect, I'd say stones are quite agentic throughout the CA. Conceiving of Gowerian stones in terms of *motion* would appear to be taking things promising new directions. There is, of course, the motif of casting dice (imagery of cyclical turning and change) in the Latin lines before this "ymage" section, but that's not quite the same as God hurling a destructive stone!

Wonderful opening. Part of what I love about this bit from Gower is the secondariness of human interests and activity. We have the stone's activity; but we also have the statue (made from many things). To be sure, the statue's a figure of a human, made by humans, and read as about humans. But this is still an 'adventure story' of sorts in which one 'object' batters another, and the human just watches, uncertain and scared. So when you write "towards the menacing statue, and therefore towards us," I'd say, sure, it's towards us, but mainly it's towards the statue, which is its own thing, independent of humans. What would an adventure story only about stones and minerals look like? Well, something like this.

Gets seriously interesting! I missed Shakespeare's use of Gower on this theme, and this morning is the first time I have read Gower. Wow!

I have only seen this theme of total obliteration once, in an early modern civic ritual. Its to ensure the obliteration of cyclical time. No broods of Phoenix's will emerge vengeful from the ashes.

Need to read Gower fully with care. Little flashes of it also remind me strongly of something British and hairy. Seems to be swimming in the same pool of ideas/images in a few places.

Very erudite, but I still think this is an image of time-travelling DC superhero Booster Gold.