Forest Talk next Thursday at NYU - Karl on Biopolitics 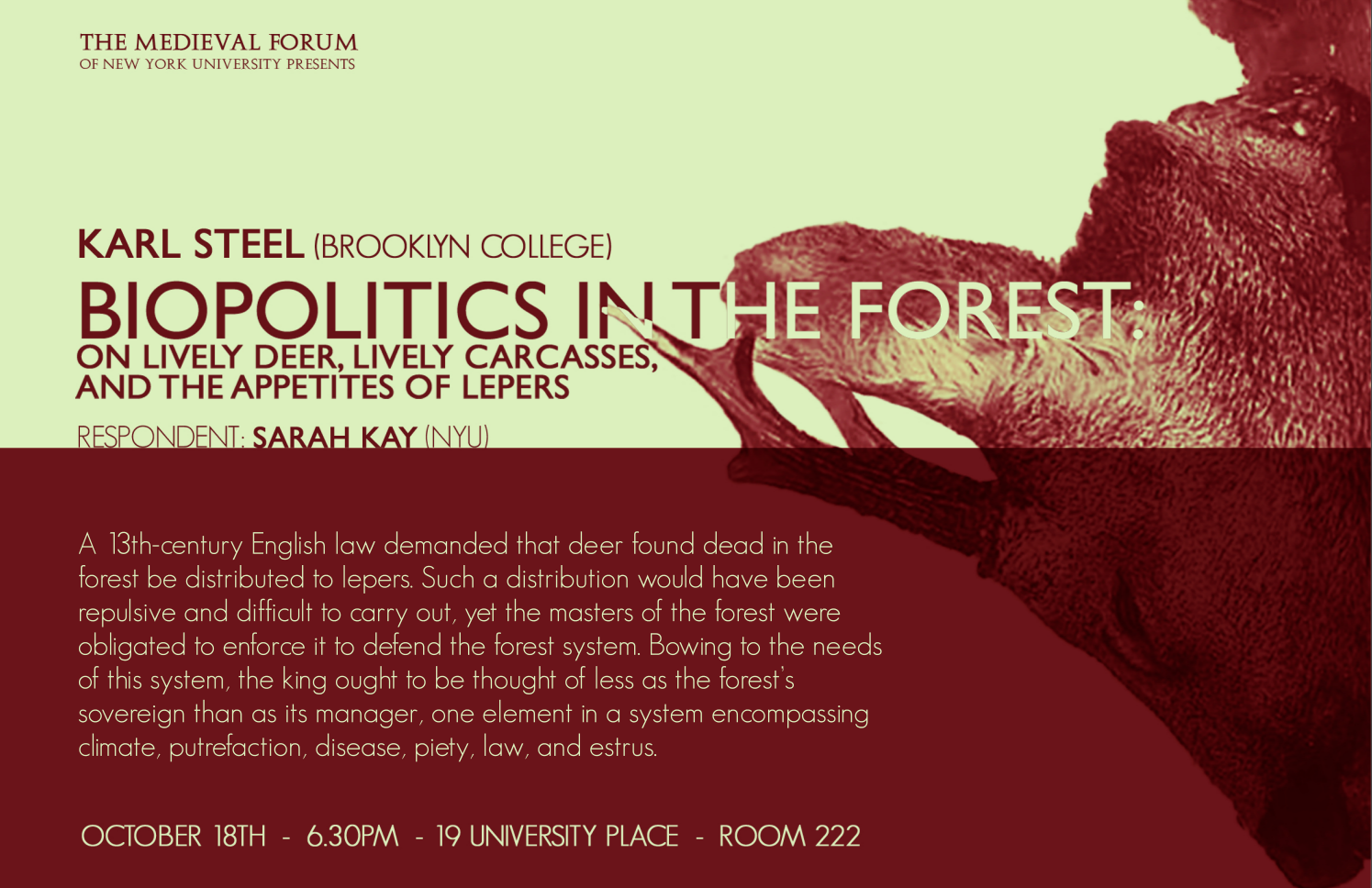 Of course read Jeffrey's ecology essay, and then continue adding to our list of new blogs, and then contribute to FUMBLR, and then congratulate and marvel at Eileen and what's coming next for Punctum and BABEL. And while you're at the Punctum site, get your hands on What is Philosophy?, ideally, I'd say, by buying a copy. I think it's going to be great.

And then come to my talk, if you can, next Thursday night (18 Oct 2012) at NYU, where I'll continue my longstanding investigations into the Medieval English forest (posts from the summer here and here; a post from 2006 (!) here). Come especially to see what Sarah Kay, my respondent, does with my ideas.

I'm doing something a bit different this time. Since I submitted my object-oriented version of my forest ramblings to Ozone, I'm now able to talk about something else, and to do it not for Eileen and Levi but for Randy Schiff and Joey Taylor and their exciting, coalescing forest anthology. My trick: inspired by speculative realism and the fundamentally ecological mindset of much nonliterary scholarship on the medieval forest, I'm proposing a switch from a sovereignty model of thinking the forest to a biopolitical model. Blame Jeffrey, who last June said something to me about Foucault. Since then, I've obligingly read Society Must be Defended, most of Security, Territory, Population, have The Birth of Biopolitics in the queue, and I've wrestled with Roberto Esposito's Bíos. And Cary Wolfe has kindly sent me the text of his posthuman take on biopolitics, coming out with U of Chicago P this December. It's going to be an important book.

So, here's an excerpt from my talk, taken from somewhere, appropriately enough, in its middle:

For the sake of those of you who know biopolitics well, I apologize for the summary [that just happened], and I also need to pause to emphasize how much biopolitical thinking I won’t be using tonight. You might recall that Foucault arrives at a discussion of biopolitics in the last of his 1975-76 Collège de France lectures, but only after developing an argument about race war and counterhistory; through this, he follows the development of racism and the solidification of state fantasy of defending itself against racial degeneracy. It would be tendentious to discover an analogue to this racism in the medieval English forest, although it might be turned up, incidentally, in fourteenth-century Burgundy, in the Roman de Perceforest’s primeval Britain, polluted by an atavistic, sylvan, and sexually rapacious clan that must be wiped out so that the lineage of Arthur can take root. It would likely be just as tendentious to discover Roberto Esposito’s immunitary paradigm in the medieval forest, how the defense of the political body turns into a simultaneously murderous and natalist thanatopolitics, although, even here, we might look to the luparii, the forest’s professional wolf hunters, and the forest system’s particular hatred for scavengers, animal and otherwise (Duceppe-Lamarre).

Other analogues may be turned up somewhat less tendentiously, perhaps by considering the fostering of deer, how nurse-cows were provided for orphaned fawns, or by considering the protection of deer during the “fence moth” and the rut, while the deer were fawning (Birrell). Here we see an attention to natal management familiar from biopolitics, just as we see familiar efforts to manage mortality, in this case, in the provision of shelter, additional forage, and the exclusion of non-cervid livestock from the forest during the winter. What makes these acts particularly biopolitical is that they’re not charitable distribution, the paradigmatic act of a merciful sovereign, but rather acts of an apparently selfless concern with a group’s wellbeing that aims to maintain or increase the size of a healthy population.

Two more analogues. First, I take the seemingly excessive attention to classifying the size of harts’ antlers in the Anglo-Norman and Middle English versions of William Twiti’s Art of Hunting not just as natural science, nor just as the promulgation of expert knowledge, nor even as the work of a crank, a “long and unnecessarily repetitive account” as a recent editor complains, but as sylvan book-keeping and cervid normalization. Knowing a hart’s number of points may be useful for measuring the health of the herd, for bragging about the size of the catch, but only so much so. As in any surveillance society, managing cervid life meant collecting more information and proliferating more classifications than could ever possibly be useful, except, that is, as a technique of extending knowledge/power.

Second, when kings asked that scores of deer be harvested from their preserves to furnish a feast or a military expedition, as in the Middle English Richard Couer de Lion, their foresters must have had at least an imprecise idea of the various forests’ cervid populations; likewise when, for example, Philip Okeover complained in 1448 that John Cokeyne killed 120 deer in his park and "lafte in seid parke but 5 dere alyve"; early fourteenth-century records of the Forest of Pickering required that keepers count both living deer and those that had died of disease, and one early sixteenth-century document distinguishes among the various kinds of diseases, including wyppys, garget, and the rotte (Birrell again). Having these numbers and facts on hand is just an aspect of husbandry, and husbandry, as I’ve been hinting, is the scandalous foundation of a biopolitical analysis that has tended to be committed to defending human particularity.

It isn’t necessary tonight to list any more analogues, at least not at this point. Let me just stress that thinkers in biopolitics should look to forest husbandry, in particular, because of its thorough and precocious intermingling of sovereignty and life management. When Foucault states that “man is to population what the subject of right was to the sovereign,” or Esposito explains that biopolitics aims not only at “obedience but also at the welfare of the governed,”they might have said that biopolitics treats humans like livestock, or, more particularly, like the sovereign’s livestock, which is to say, like venison.

Posted by medievalkarl at 10:35 AM