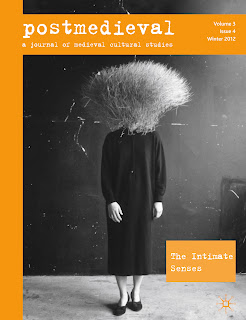 
. . . sensation is an intimate threshold of knowledge that emerges in the fragile and ephemeral space that exists between our futures and our pasts. It beckons for a more sensuous connection with the past that can resonate in the present, even as it builds on the material ways in which we are already interconnected. And it hopefully inspires us to feel differently about those.

As we are having this really engaged discussion, here at ITM and elsewhere, over the subject of Stephen Greenblatt's award-winning book The Swerve: How the World Became Modern [and how that book gets the medieval period all wrong ... again!] and also over the subject of the perils and possible benefits of what we call "periodization," especially in literary and historical studies, I would like to put in a shameless plug for the ongoing work of the journal postmedieval to call certain temporal and "period" boundaries into question and to also keep in continual motion and friction the question of the relations between the medieval and modern as well as their supposed differences and/or similarities, OR, as as Ruth Evans, Helen Fulton, and David Matthews argue in their Introduction to Medieval Cultural Studies: Essays in Honour of Stephen Knight, to place “medieval” and “modern” side by side, not to “simply give 'cultural studies' a diachronic dimension or make the middle ages relevant to today. Rather, it is about continuous provocation.” It has also been the aim of the journal, from the very beginning, when a medievalist [myself] and an early modernist [Craig Dionne] joined hands to tackle the subject of the premodern post/human with a whole fleet of collaborators working in medieval and early modern studies, but also in contemporary studies, to craft new spaces for a a more broad "premodern" studies in which the lines between "medievalist" and "early modernist" would be less visible, and where we would "merge" and "converge" upon each other's so-called "periods."

Therefore, I am especially pleased, too, to announce the publication this week of the most recent issue of postmedieval, a volume of essays, co-edited by an early modernist, Holly Dugan, and a medievalist, Lara Farina, on "The Intimate Senses," in which medievalists and early modernists investigate together how "sensation is an intimate threshold of knowledge that emerges in the fragile and ephemeral space that exists between our futures and our pasts." Further, in their Introduction to the issue, where they hone right in [if even unconsciously] on some of the issues that have been recently percolating, in troubling or at least vexing ways, concerning so-called period "divisions" + disciplinary "divides" and the various "field" routes by which we orient and "collect" ourselves, they write:

Sensory experience, past and present, is for us anything but determined or detrimental to a future-oriented optimism about relational embodiment. We have, therefore, sought essays that increase our understanding of the ways that people, places, and things became intimates in the medieval and early modern periods. Literally overlooked in favor of recent attention to visual culture, past habits of smelling, touching, and tasting emerge here to challenge the reign of the gaze as determiner of subjectivity, power, and pleasure in/with the other. Visual culture continually earns pride of place in humanistic and posthumanistic study, and cultural history too often repeats the story of vision's ascendancy and its triumph over the other senses during and after the Enlightenment. Many scholars working on sensation in contemporary culture and in the past have demonstrated how this assumption is simply untrue. Our issue thus draws from this work and the multiple fields in which the primacy of vision and the limitations of the ‘visual turn’ in scholarship are under new scrutiny. The five essays here each offer their own substantive contribution to this broader project of sensory recovery. To draw out the potential of their work on the non-visual past for new stories about intimacy, however, we have followed them with responses written by scholars of present-day cultures. We hope this pairing of past and present suggests ways in which intimate relations can resonate across time to join a broader conversation about how we feel together.

Such a project is as embodied as it is scholarly. The very term ‘intimate’ renders the self as a being in space, one with an ‘inner’ dimension that is both separate from the world at large, yet at times, remarkably close to it (Oxford English Dictionary). The designation of taste, touch, and smell as senses more ‘interior’ than others located them close to the core of personhood. But their operation simultaneously suggested that the human body was open, porous, and vulnerable to its environment. Associated with fleshly forms of knowing rather than enlightened reason, these ‘intimate senses’ rooted a body in its material environment even as they defined its boundaries. Mapping the sensing body spatially, we might say, gave us intimacy. Yet intimate sensation is not idiosyncratic. The alternative definition of intimacy uses spatial proximity as a metaphor for affect, suggesting that sensory history provided a language for describing the collective social body as well the individual one (Oxford English Dictionary). The ‘closeness’ accorded to intimate sensations came to describe both abstract and material sets of social relationships in the early modern period. We still rely on these metaphors when we designate others as ‘close’ to us (Bromley, 2012, 6).

It is noteworthy as well that Holly and Lara include in the issue 5 essays by scholars working in more contemporary periods in a rich diversity of fields -- anthropology, disability studies, cultural geography, theater and performance studies, medicine/neuroscience, and rhetoric -- who wrote essays that respond directly to the work and thought undertaken by the premodernists in the issue, thus modelling a more capaciously cross-temporal and cross-disciplinary analytic framework for thinking about the senses across time and in different places, one in which scholars working in different periods and fields are directly engaging each other and not just talking past one another.

It occurs to me, especially after having just spent 3 days at a "collaboratory" on the "Faces of Emotion" at the University of Melbourne, where presenters attempted to respond to some pretty big questions about the medium of the face [as the site of actual encounters, but also as representational screen, as performance, as the plane of ethics, and so on] in relation to issues of historical change, that we can't really talk about changes over time [whether in cultural climates, intellectual life, individual and group identities, beliefs, mentalities, etc.] without massively collaborative approaches that are not restrained in advance by notions of disciplinary "difference" or temporal and cultural and linguistic boundaries, while at the same time, of course we should be working to try to bring certain differences [cultural, historical, mental, whathaveyou] into some sort of relief in our work, because the emergence of "change" in any given moment or place is always significant: it highlights transformation, without which, there is no real history, nor future that is not static and "dead." But as Steve Mentz has also usefully reminded us,

Any narrative about historical change-and-continuity must, in order to be a narrative, do some violence to the plenitude of the historical record. Some narratives  are better than others; some work and others do not. . . . History overfills all human narratives; that’s why in addition to “facts” we need poetry — and geometry, statistics, economics, plasma physics, interior design, geoclimatology, the Hubble Telescope . . . Objects and alliances of all sorts, human and not.

We need these narratives, of course, even when we recognize what they occlude or simply neglect to address. For example, in this post about the new issue of postmedieval, I want to tell a story about how medievalists and early modernists have worked together to productively tackle complex historical-cultural subjects [such as the "senses" or the "post/human"], the "lives" of which extend [in often surprising and unexpected ways] across disciplinary and temporal boundaries, and in order to do that, I reinscribe the temporal markers "medievalist" and "early modernist." I make the so-called period "division" palpable again.

One would like to imagine a future in which university scholars and others outside of the university proper who do cultural-intellectual work would simply collectivize and work together over affectively shared interests in particular objects and subjects that do not necessarily sit still in traditional disciplinary and/or temporal frameworks. These objects and subjects would draw us "in" together and give us new fields of play and thought. But "location" will always matter, and time periods are objects of fascination, too: things and places that attract us and that we desire. But they also don't "sit still." And that's something to think about, too.