Some Medieval Dogs to Haunt David Brooks and His Modern "Mutts"

Because Julia Carrie Wong has already destroyed David Brooks' "A Nation of Barrel Fish Mutts," my dog post can be nothing but a whisper in the ear of the moderns. With that caveat, here's the atrocity from Brooks:


we will no longer be an outpost of Europe, but a nation of mutts, a nation with hundreds of fluid ethnicities from around the world, intermarrying and intermingling. Americans of European descent are already a minority among 5-year-olds. European-Americans will be a minority over all in 30 years at the latest, and probably sooner.

and, in his last paragraph:


On the whole, this future is exciting. The challenge will be to create a global civilization that is, at the same time, distinctly American. Immigration reform or not, the nation of mutts is coming.

Brooks isn't exactly decrying the disappearance of a European-Americans. Like a good capitalist, Brooks doesn't want to be tied down to the old verities. He's looking forward to the new mobility, and especially to the new interracial dynamic upper class, smugly and self-deceptively "meritocratic" like any other, and--I sense--like a good right-winger, he's looking forward to the disappearance of protections of minorities in his new America ("We now have this bogus category, 'minority,' in which we lump the supposed rainbow coalition of immigrants and blacks.") (edit: and I just remembered the work of my Brooklyn College colleague Alan Aja, who's doing important work on the ways that ethnic categories of, say, Cuban immigrants to America gradually transform into the ethnic categories of America). 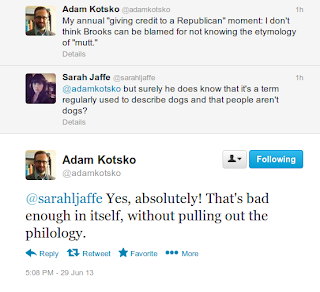 Animal comparisons tend to be bad not because "people aren't dogs" because because people don't think much of most animals (and that's how they know they're "people" and not animals). You probably know this by-now hoary observation from Cary Wolfe:


so long as it is institutionally taken from granted that it is all right to systematically exploit and kill nonhuman animals simply because of their species, then the humanist discourse of species will always be available for use by some humans against other humans as well. (8)

Though dogs are dogs and not wolves or lions, I suspect dogs and their people wouldn't mind having dogs compared to wolves or lions. Or even jellyfish, if the dog is silly enough. The problem isn't bad classification in general but what happens to humans reclassified as "mere" animals.

Sometimes, not much. It's really not always bad to compare people to dogs. Edward, Duke of York, via Gaston Phébus, and indeed via medieval animal lore as a whole, assures us that dogs are the noblest of beasts, the most kind, loyal, and brave. So far as Edward's concerned, it's not so bad to be a dog, since most dogs are probably better than most people. Better than most women, particularly, at least in the more misogynist circles of medieval (and modern) dog culture.

Again, the problem with Brooks isn't the dog but the "mutt" comparison, which relies on the paired notion of both purebred Europeans (and others, but especially Europeans) and purebred dogs. We probably have a hunch (see this tweet, reproduced above) how useful this comparison has been to people like Brooks. And having at least brushed by books by Goffart and Geary, and maybe having a hunch at how painful and partial assimilation into dominant America has been for Italian, Irish, and Jewish immigrants (for example), we of course know how historically and scientifically risible it is to talk about "European-Americans."

But what about the dogs themselves? What about this word "mutt"? Here's something I should know about that I don't. I recommend you start with Harriet Ritvo and then, if you remember, get back to this post.

Now, "regarding types of dogs," writes Kathleen Walker-Meikle, "we must remember that [in the Middle Ages] they were generally classified according to function, and breeds were considerably less closely defined that they are now" (Medieval Pets 6). Her primary cite here is John Caius's De canibus Britannicis, which we might supplement, if we're feeling a bit wacky, with Toy Dogs and Their Ancestors. To these, we can add the laws of the Salian Franks (perhaps as early as 6th century?), whose laws against dog rustling impose separate penalties for crimes against "trained hunting dog[s]," "tracking hound[s]," "dog[s] that [are] usually tied up," and, finally, "herd dog[s]" (70-71). Skipping ahead to the English Forest Law (12th - 14th centuries), we notice how dogs large enough to hunt should be mutilated if they live in or near a royal hunting preserve:


All dogs which were found that could not or would not be drawn through a strap of eighteen inches and a barleycorn in length and breadth were hombled. The further joints of the two middle claws were cut clean away, and the master or owner of the dog was amerced in three shillings and a penny.

It's clear, then, that Walker-Meikle's "function" means, for the most part, the serviceability of different shapes of dogs to different kinds of hunting.

And now you know enough to laugh at the American Kennel Club's entry on Bloodhounds, which explains? imagines? the following:


In the twelfth century, when even bishops rode to hounds, dignitaries of the church were among the foremost in fostering the development of the Bloodhound. A number of high ecclesiastics maintained packs, and the kennel was an important part of every monastery. To them goes a great deal of the credit for keeping the strain clean. In fact, so much care was taken in the breeding of this hound that it came to be called the 'blooded hound,' meaning aristocratic.

The Middle English Dictionary sort of hints at this, incorrectly I think, while the OED--shockingly--gets it right with "apparently so called from its use in tracking (wounded) game." It cites a Middle English Guy of Warwick, where it's clear that Tirri uses his "blod houndes þre" not because of their "clean strain" but because they do a different job than the hounds he used to first harry the boar.

In sum, medieval breeds don't have genealogies; they have purposes. Functions not aesthetics. Medieval people didn't really have pets in the way we silly moderns do. We alienated moderns have lost touch with the real stuff of existence. Whoever this "we" is.

This division, at least, is the general sense of things. The general sense divides medieval practicality from modern frivolousness, medieval masculinity from modern femininity (think of Deleuze and Guattari's notorious contempt for the lapdogs of "elderly women"), the medieval foundation from its dispersal into modern heterogeneity, and so forth. Holding on to this temporal/cultural division keeps us in Brooks' territory and in fact in the territory of all conservatives who believe in the homogeneous thing that existed before the mutt.

Except, pace Brooks et al., we do have medieval breeds, sometimes described in ways familiar to our modern sense of breed as shape, color, and parentage, where the aesthetic can't be so easily distinguished from the functional. When Albertus Magnus details the body type for mastiffs and greyhounds (the latter should have "an elongated neck which flares laterally near its connection to the head; an enormous chest which tapers to a sharp edge along its inferior border" (81)), he doesn't always hold strictly to functional preferences. Greyhounds should have "upper lips which overhang the lower jaw very slightly," which perhaps has a practical use, though, to my unprofessional eye, it sounds as though Albert just wants himself a sloppy dog. More notably, he believes reddish dogs are easily trained to do tricks, though not so easily as a little fox (which may be a particular kind of dog, given that foxes don't train well). Furthermore, Albertus suggests that "genus canum ignobilius" (edit to correct translation: the most [more?] ignoble type of dogs) are suitable for guarding houses. When James Scanlan translates the phrase as "mongrel" (79), which is to say, "mutt," he may just be correct. For Albert, some dogs just look better than others. Some dogs just come from better families than others.

Finally, Edward, Duke of York, explains that "the goodness of running hounds, and of all other kinds of hounds, cometh of true courage and of the good nature of their good father and of their good mother." This is breeding, though we might observe, far too simply, that this is breeding for character rather than strictly for lineage. Edward also prefers tan running hounds, black-muzzled greyhounds, and alauntes that are "white with black spots about the ears." When he praises Spanish dogs for use in flushing game for hawks, Edward observes:


For a country draweth to two natures of men, of beasts, and of fowls, and as men call greyhounds of Scotland and of Britain, so the alauntes and the hounds for the hawk come out of Spain, and they take after the nature of the generation from which they come.

Edward's combination of human and animals in breeding may sound familiar (perhaps chillingly so) to modern readers (though to complicate your sense of medieval race, region, and climate, read Suzanne Conklin Akbari's Idols in the East : European representations of Islam and the Orient, 1100-1450).

The simple point, contra Brooks, is that we're all mutts; that the medieval isn't any simpler than the now; and that we all pretend to purity, simplicity, humanity, and merit when it suits us, sometimes for good, sometimes not. It's not that the past is another country but that the past had its own certainties, like we have ours, and that knowing them, and knowing enough to know how they've changed, may help us hesitate before we stupidly throw about words like mutt or stupidly pretend that American modernity and capitalist rationalism will finally and gently do away with the ongoing violence of naturalized hierarchies.
Posted by medievalkarl at 2:04 PM

The word for dog in English seems to be hound till about Chaucer. I OE, as far as I know, there is only one attestation is a gloss on a line of prudentius, canum, used pejoratively describe some sort of generally 'bad' individuals. It was an OED and DOE corpus search a few years ago that got me that, looking into, I think it's marijane Osborn's argument that the hapax 'dogode' in wulf and eadwacer be read as an instance of *dogian, to dog (as in, I think, of I remember right, to track and chase).