Greetings from the UK! I've arrived in London after an excellent conference in St Andrews on The Middle Ages in the Modern World (MAMO) and will offer a more detailed blog posting about it very soon.

MAMO explored the many ways the medieval past infuses contemporary culture. Today--in honor of Canada Day--I discuss a fascinating session entirely dedicated to Canadian heraldry. Three presenters associated with the Canadian Heraldic Authority (CHA) provided insights into how they design, grant, and register new armorial bearings for individual Canadian citizens well as other Canadian entities (e.g., universities and schools, cities and municipalities, provincial and local governments, and tribal emblems for indigenous communities). How does the CHA take an obscure and archaic medieval tradition--heraldry--and translate it into modern terms? In what ways does Canadian heraldic practice differ from medieval usage? 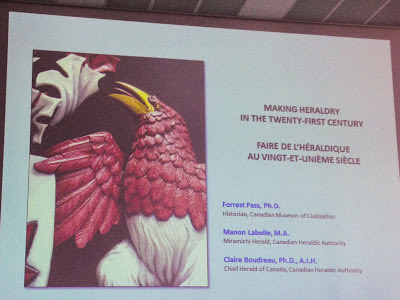 Forrest Pass, historian at the Canadian Museum of Civilization and former Herald and Assistant Registrar at the CHA, started with a fascinating talk on (mis)perceptions of heraldry in modern North America. While I had assumed Canadian heraldry traces its origins directly back to medieval Britain, I was surprised to learn its origins can be found in both Anglophone and Francophone traditions (as well as modern fantasies about the past). As Dr. Pass explained in his talk, Edward Marion Chadwick--influenced by democratic ideals developing concurrently in the US--rejected "old world" notions that heraldic arms should be granted only by royal authority (as in Britain) and he believed that anyone * should be able to design and use arms. Indeed, his innovative book of arms, Ye armiger (1901), was decidedly Canadian: it included arms of Ontarian families as well as indigenous animal totems (see HERE for his bio). Frederic Gregory Forsyth, who styled himself Viscount de Fronsac, claimed illustrious ancestors through his own genealogical research; he believed that the French aristocracy were the rightful nobility in Canada and later established the College of Arms of Canada. ** 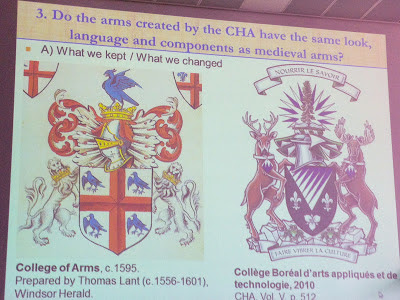 [On the left, the arms of Britain's College of Arms in the UK; on the right, the arms of the Collège Boréal (a francophone college of applied arts and technology) in Ontario.]

Manon Labelle, who is officially the Miramichi Herald (each Herald at Arms bears a Canadian river-name designation), showed how the present-day practice of Canadian heraldry in some important ways confirms to medieval European practice: each design is designed and calligraphed by hand. The petitioner's arms are developed through consultation between the CHA and the petitioner. 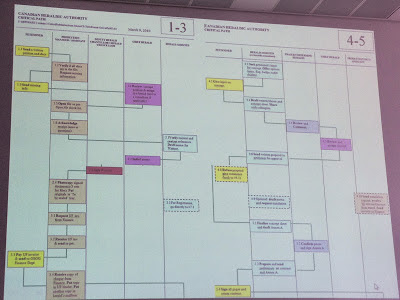 Here's the complex flow chart of this procedure from the presentation (above). On the CHA website you also can read more about the application process (with lovely flow diagram). 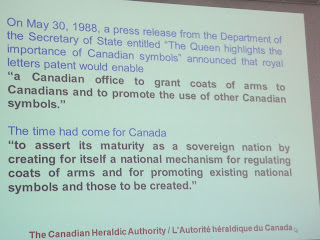 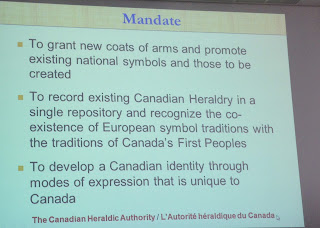 The current Chief Herald of Canada, Claire Boudreau, gave the final presentation in this session: she set out to discuss some important ways that Canadian heraldry explicitly diverges from other armorial traditions. The CHA is officially only 25 years old (with letters patent granted by Queen Elizabeth II in 1988), and the Canadian heraldry exhibits some conspicuously modern, progressive features. A very important point to remember here is that any citizen can submit petition for heraldic arms, and the arms do not signal social distinctions such as gender or rank; moreover, arms can transferred from one generation to the next in ways that reflect all kinds of family structures and kinship relations (spouses or domestic partners of either gender, stepchildren, adopted children, etc.). 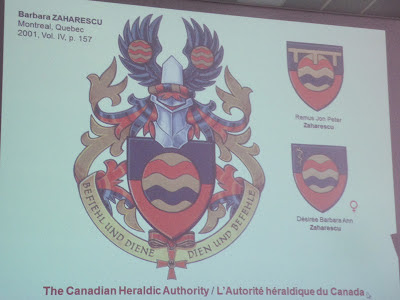 See (above) the arms of a woman, Barbara Zaharescu (with German motto); her two children (one male and one female) with identical arms except for an additional distinguishing mark (or brisure). 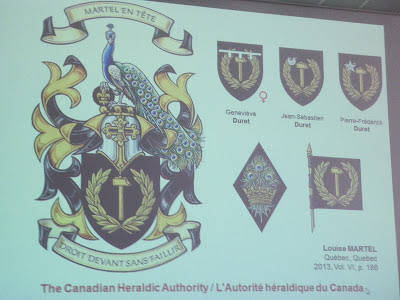 Above is another example of the arms of a woman, Louise Martel (note pun on French "marteau" or hammer) with gender-neutral distinguishing marks for children. 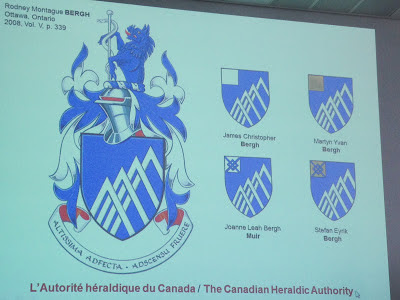 And here's an example of a man, Rodney Montegue Bergh, who has children from two different marriages (and note the use of shared arms even though not all the surnames are the same). 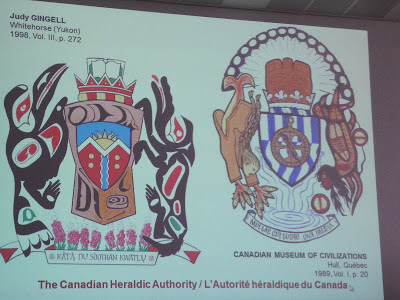 An important point made by Dr. Boudreau was that Canadian heraldry can incorporate visual elements from non-European traditions, such as indigenous cultures. See for instance the arms of Judy Gingell (a woman of Tlingit ancestry) and the arms of the Canadian Museum of Civilization (the supporters include Inuit and Algonquin water spirits).

While most of the mottos are in Latin, English, or French, over thirty different languages have been used in Canadian heraldry (including European and indigenous languages, as sampled in some of the arms above). 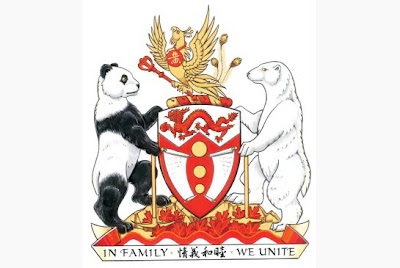 The Canadian Wongs--or rather a Chinese-Canadian association associated with the Wong surname--made the news in 2011 for making several innovations. First, the arms featured a panda bear and a polar bear as supporters; second, it was the first case of Canadian arms using Chinese characters in the motto (compare this to the arms granted to a Chinese Canadian individual.)

This blog post is only the "tip of the iceberg" of the many fascinating features of Canadian heraldry--an enduring aspect of visual culture that takes advantage of the flexibility of medieval traditions while also adapting them to modern aims and desires.

* Anyone who owned land anyway.

** Dr. Pass noted some of the dubious aspects of this character. Among many things, he claimed to be born in Montréal--but was actually born in the US.
Posted by Jonathan Hsy at 6:05 AM

One of the distinction given between the Canadian and other systems is that in Canada "A very important point to remember here is that any citizen can submit petition for heraldic arms" - that's pretty much true in the UK too. In Scotland you have to be "a virtuous and well deserving person" and in the rest of the UK "There are no fixed criteria of eligibility for a grant of arms".

Miramichi Herald
is the title of Manon Labelle

@Anonymous (1): Thanks for that point; I wasn't sure if this principle applied to other countries as well.

@Anonymous (2): Oops! I'm so sorry, I've corrected that error in the blog post. Thanks for pointing this out. - JH

My confession is that I volunteered to chair this panel because: 1., I am Canadian and, 2., Dr. Pass and I went to undergrad together and did suspect things like compose limericks and play Botticelli. So while I am indeed biased, I have to say that I found it incredibly cool to see how this aspect of the medieval world was adapted to very modern circumstances.

In speaking to the heralds over those fattening Scottish breakfasts, I was fascinated to hear that they really go through an interviewing process to help applicants pick the right symbols. The applicant has to distill the essence of their life into a graphic, and the process of doing so is a kind of analysis. So while there is a historical aspect (all of the heralds are trained historians), and a graphic design aspect, there's also something psychological and, dare I say, literary about it.

So, an example from the panel: Barbara Zaharescu has a Romanian surname, based on the word for sugar, "zahăr." So at the top of her arms you can see... a sugar loaf.

@i: Thanks for chiming in, and for chairing this great session. This is all really cool -- I got a sense from the presentation that the design process was a pretty involved, but hadn't realized there was such a strong interview/consultation element to it. And I love the pun on the Romanian surname! That surname-punning seems is medieval too, don't you think?

*surname-punning seems quite medieval, that is!