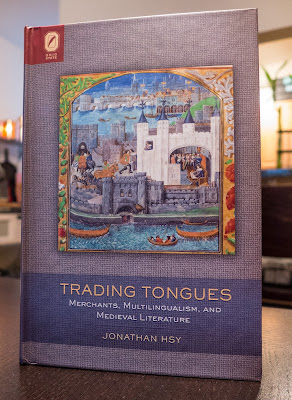 Many people—including my colleagues, my co-bloggers and ITM readers, and other people (online and in real life)—have played a role in shaping this project. I hope those of you with interests in translation studies, comparative literature, historical linguistics (among other things) will find this worth your while!
Posted by Jonathan Hsy at 10:10 AM

as it happens, we are doing a homeschool year with an incredibly bright 9th grader of our acquaintance and we'd all decided that trade would be the focus of World Geography and part of our Literature study (think, for the latter, Heorot as a symbol and stronghold of global trade relations). She is in her third year of French, so that can relate, too.

John and I will definitely be putting this on our "homeschool teachers'" bookshelves, and may even use excerpts for this above-level learner. To be seen. Very excited to have this resource.

@Lisa: That's all so very cool; will be interested in knowing how that goes! I'll be really curious to find out what sort of readership the book might get outside of university settings.

Congratulations Jonathan! Multilingualism is a point of emphasis for me when I teach Chaucer, so I look forward very much to reading this as both teacher and scholar. Well done!

It's a beautiful book. Congratulations!

Hey everyone: Thanks for the enthusiasm! @ JT: I hope you'll find the book useful in your Chaucer class! You can preview much of the text - intro and, I believe, a good deal of the Chaucer-focused chapter - on the OSUP website. And Chaucer certainly pops up all throughout the book too! - JH