On Facebook, my coblogger JONATHAN HSY (whose recent post on Canadian Heraldry you should read) links to fine post by linguistics prof Ingrid Piller on language diversity in medieval and modern Constantinople/Istanbul. 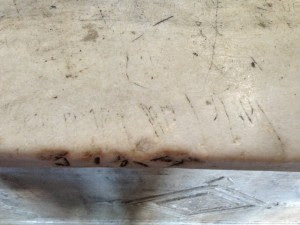 She shares this picture of graffiti runes in Hagia Sophia, which she connects to a Chinese Flyer for an room for rent in modern Antwerp, which leads to consideration of how official monolingualism tends to erase evidence of multilingualism.

Piller finally leads us back to modern Istanbul and modern Turkey's famous language reforms, where she observes:


The reform was “a catastrophic success,” as the Turkologist Geoffrey Lewis has called it. As a result, most contemporary Turkish speakers are cut off from their linguistic and cultural heritage predating the 1930s. A famous – and also ironic – example of the monolingualization of Turkish is the fact that a major 1927 speech by Atatürk, the founder of the Turkish Republic, has had to be ‘translated’ repeatedly into contemporary Turkish so as to remain comprehensible to contemporary Turks.

In Istanbul, as elsewhere, contemporary examples of ‘super-diversity’ – the Russian ‘Sale’ signs in the shop windows, the tourist communications in all the languages of countries with strong currencies, the handwritten Arabic ‘for rent’ signs, the Kurdish music stalls – are impossible to ignore. By contrast, the fact that super-diversity has been a characteristic of Istanbul-Constantinople-Byzantium since time immemorial is easy to overlook.

I'm presenting all this to join Jonathan in encouraging you to read her post, but also to share a photo with you, which I took on my Istanbul trip in January 2012. While there, my very multilingual colleague Louis Fishman (his twitter account; some articles; and here we are trying to solve a historical puzzle) gave my wife and me a tour of a few neighborhoods and took special effort to point out the following near İstiklal Avenue:


Click on the image to see it better (edit: I've now uploaded the original set of photos, which I think probably give a better sense of what the door lintel looks like: see here). That's script in Roman letters, transliterating an Ottoman Word (it says Asseo Han," the Han or caravanserai of the Asseo family), and possibly the same phrase repeated in Ottoman Arabic and Hebrew. Louis said that one of these, representing the Han of another family, had also been visible directly across the street, and taken down or otherwise obscured to present a monolinguistic Turkish past, which he then connected to the controversy over Bonomo (a Sephardic Jewish Turk) representing Turkey at the Eurovision contest. Louis's apartment in Kurtuluş (a view), where we were staying, was itself a formally Greek neighborhood, but purged of Greeks in the 1955 pogrom.

More data, then, for Piller's observations.

Posted by medievalkarl at 9:26 AM