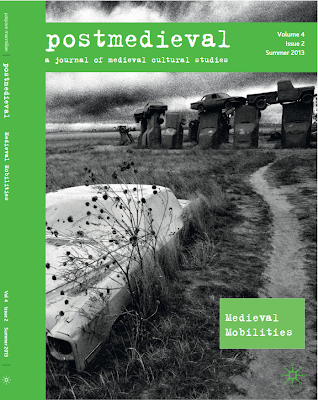 Somewhat serendipitously, given both Jonathan's and Karl's recent posts, respectively, on Canadian heraldry and multilingual graffiti, and their emphases on what might be called the "mouvance" of medieval objects (including language, texts, etc.), the most recent issue of postmedieval on MEDIEVAL MOBILITIES, edited by Laurie Finke, Martin Shichtman, and Kathleen Kelly, has published this week. In their introduction to the issue, Laurie, Marty, and Kathleen write,

The idea for a special issue on the transcultural Middle Ages with a focus on mobility came from a mystery novel. The events of Maureen Duffy's Orpheus Trail are set in motion by the discovery in an Anglo-Saxon burial of several objects of Middle Eastern origin, including talismans representing Mithric and Orphic cults. While the police sort out a series of grisly murders involving a pedophile ring exploiting migrant boys (another contemporary example of transcultural movement across borders), archaeologists and museum curators of Middle Eastern Studies, Egyptology, Anglo-Saxon England and, oddly, Victoriana, try to figure out how these antiquities fetched up in Essex. It requires a collaboration among experts from several disciplines to solve the murders by deciphering clues from the ancient past. As the ‘trail’ in the title suggests, the novel highlights flows across boundaries, both national and disciplinary: a temporal and geographical line that stretches back ‘from Essex to the North African deserts and the sphinx's smile’ (Duffy, 2009, 123).

Duffy's premise that an Anglo-Saxon grave might contain objects from the Middle East is not fiction. Archaeologists, numismatists and historians who study the remains of medieval material culture are constantly confronted with the reality of how often and how far goods traveled in the Middle Ages.

This issue of postmedieval, then, asks a deceptively simple question: How did ‘things’ circulate globally across borders during the Middle Ages and with what consequences for cultural interaction? The volume assumes the construct of a transcultural Middle Ages and puts that paradigm into dialogue with the emerging field of mobility studies. The trans in ‘transcultural’ certainly captures something about movement: How did coins minted in Samarkand end up in England? Christianity from the Eastern Mediterranean rim in China? A focus on the transcultural Middle Ages is often a focus on ideas, people and goods once they have arrived. What happened to them in their new home? To focus on mobilities, however, is to pause on the road, not to reconstruct the means by which things arrive, but to examine the route itself. What we want to celebrate as cultural fluidity – something that new approaches to medieval studies allow us to see more and more – is the result of mobility.

For the most part, mobility studies – the critical study of the movement of people, goods and ideas – is dedicated to the contemporary moment, a present of displaced persons and immigrants and city streets and airport lounges. Scholars associated with mobility studies tend to cluster in social anthropology, cultural geography and sociology. While a number of medievalists have begun cruising cultural geography and sociology and explicitly articulating a more global, transcultural and mobile Middle Ages, medievalists have been working in the domain of mobility studies without naming or theorizing it as such before ‘mobility studies’ was recognized as an interdiscipline. Mobility studies is in need of historicizing, and the Middle Ages is in need of mobility theories.

The volume has many precursors, of course [from the Hakluyt Society established in 1846 to Paul Zumthor's and Jerome McGann's work on textual mobilities to  Latour's actor-network theory to David Wallace's new Literary History project to Geraldine Heng and Lynn Ramey's Global Middle Ages project to Sharon Kinoshita and Brian Catlos's medieval Mediterranean studies to Suzanne Conklin Akbari's work on the Norman world "as a cultural network connecting Sicily, Italy, France and England by sea routes from the Mediterranean to Scandinavia," and beyond], but there is a special connection in this issue as well with the work of British sociologist John Urry [also the respondent to this issue], whose "mobile sociology" brings important light to the role of non-human objects and agents in the mobile systems that have shaped various global histories. Ultimately, as the editors explain, such a project of tracing the global circulation of medieval objects, and thus of describing a "medieval world system,"

can only ever be collaborative because no one individual or discipline can have the necessary expertise to describe the whole world. This volume is both prolegomenon and call to explore collaboration as a kind of flow, and scholarship itself as a knowledge transfer between domains. We want to suggest that strategic uses of those flows might counter static understandings of scholarly activity and expertise. We open ourselves up to some of the messiness of the Middle Ages by recognizing how often people, objects and ideas were on the road, in movement, in flux, never completely locatable at a single fixed moment, in a single place or speaking in a single language.

Herewith, then, the Table of Contents [and note that there is an awesome Book Review Essay as well by Kathleen Biddick on "transmedieval mattering"], and if anyone who does not have institutional access to the journal would like any or all of the essays in this volume, please just email me at: eileenajoy@gmail.com.