If you're new to or ignorant of Old Norse, as I suspect even many of you are, and if you plan to get comfortable with Old Norse before the New Chaucer Society arrives in Iceland, you've no doubt disappeared hopelessly into the thicket of Old Norse pronouns: personal, demonstrative and indefinite, not to mention the definite article, in masculine, feminine, and neuter, singular and plural forms, and, in the personal pronouns, a dual as well, and for nearly all of these, a nominative, accusative, genitive, and dative form (but thank goodness, no ablative or vocative, so far as I know). In sum, I count 150 separate 'slots' for pronouns.1

To me, that's a lot. I realized I needed some kind of electronic tool. Liberation Philology Old Norse is wonderful, but it doesn't have a pronoun module. One would have to be built.

This morning, I found the Drupal 'Quiz Drag Drop' module, itself built on the 'Quiz' module. All I had to do was to learn to do a few things: how to install Drupal in Ubuntu; how to install Drupal modules in Ubuntu; and how to set up quizzes once I installed the module. The last step isn't any more mastered than the first several. More lemon difficult than easy peasy, at least for me.

But I did it. I'll figure out how to make this public sometime in the next few weeks, and in the meantime, or any time before next July, I'm happy to take suggestions or recommendations.

If the video resolution is terrible in this post, as I suspect it might be, try my tumblr page instead. And apologies for the roar of my Dishwasher.

I wasn't happy with the Drupal module: not much documentation, not much help. Today I tried Moodle. Here's a screenshot of the result after I successfully completed the test: 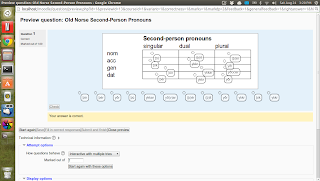 Since my OS is Ubuntu, I used these instructions to install Moodle. I then downloaded the drag and drop quiz types from here, unzipped and copied them into the /var/moodle/question folder (use your own method: I opened Nautilus as root to make copying into the appropriate folder easy), checked the README files in the unzipped folders to make sure I had installed all the dependencies, and then clicked on 'notifications' from within Moodle to make sure the plugins actually installed. This sequence isn't exhaustive: I'll be happy to share a full set of steps with you if you need them. If you're not running Ubuntu or some other such OS, you'll probably get along fine without. And if you are running Ubuntu, do NOT install Moodle from the official repositories (sudo apt-get install moodle is NOT your friend). Use the instructions I link to above.

Short version: here's the video instruction I followed for making a drag and drop quiz in Moodle once the plugin's been installed. Enormously helpful.

Once Moodle's been set up appropriately (not so easy), this is a far easier, less clunky setup for my pronoun quiz. The feedback system isn't as quick as it is in the Drupal Addon, but that's a small loss given the overall gains.

1. Yes, I know perfectly well that modern-day Icelanders don't, as a rule, speak Old Norse.↩
Posted by medievalkarl at 2:29 PM