What's the Worst Thing You Can Do to Shakespeare? 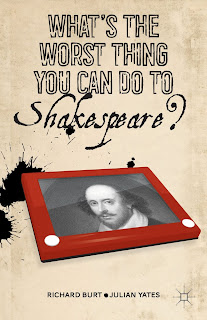 The chance to get to know Julian Yates over the past few years has been a special pleasure for me, as well as challenge to some productive new avenues of thought. I've admired Error Misuse Failure since I read it several years ago (it's a prescient book), and I followed Julian's work through the intriguing essays that followed. I'd noticed a burgeoning ecological interest in his scholarship, and so when it came time to put together Prismatic Ecology: Ecotheory Beyond Green I naturally invited him to contribute. He's come to GW twice, as part of our Animal Vegetable Mineral conference, and in a celebration / interrogation of Karl's book. And then there is Ecomaterialism and Speculative Medievalisms and Elemental Ecocriticism, and he and I have put together a seminar on "Object-Oriented Environs" for the SAA and ... well, that's a lot. But like all the people whose intellect I admire and friendship I value, he has an ability to keep making things new, to reveal the unexpected in what seemed too familiar. He's also a beautiful writer, has a hilarious sense of humor (I have a picture of him with a stuffed monkey atop his head I could share), and pretends never to tire of my tea-and-marmalade jokes.

Julian was kind enough to send me an advance copy of his latest book, a work co-authored with Richard Burt called What's the Worst Thing You Can Do to Shakespeare? Because I'm in Writing Lockdown right now I haven't been able to sit and devour the whole thing as I yearn to do, but I've made quite an inroad and: it's really great. It challenges many recent orthodoxies in the field, especially around history of the book, and offers some bracing models for how (multi)media works.

Palgrave Macmillan has granted the blog permission to publish an excerpt from the book, so I offer the beginning of chapter one below. My apologies for any formatting errors; it was not easy text to import. Enjoy!

It is yours to reade him. And there we hope, to your divers capacities, you willfinde enough, both to draw, and hold you: for his wit can no more lie hid, then itcould be lost. Reade him, therefore; and againe, and againe: And if then you doenot like him, surely you are in some manifest danger, not to vnderstand him. Andso we leaue you to other of his Friends, whom if you need, can bee your guides: ifyou neede them not, you can leade your selues, and others. And such Readers wewish him.— John Heminge and Henrie Condell“To the great Variety of Readers”— The First Folio (1623)1

BEFORE, OR PERHAPS AFTER, ALL, THE WORST thing you can do to Shakespeare is
not to read him. Here, at the envoi cum media launch that was the First Folio,
John Heminge and Henrie Condell offer an economy of reading that threatens
the putative reader/buyer with the “manifest danger” that “unreadability” might
conjure. This rhetorical unreadability that reflects on you stands surety against a
literal, prosaic nonreading of the book that would render it a media nonevent.
Against this eventuality, Heminge and Condell recruit the “great variety of readers,”
“from the most able” “to him that can but spell.” For it is upon our “capacities”
(heads and purses) that the “fate of Bookes depends.” As “readers,” then, we
are recruited to become the biocultural “wetware,” the life- in- death preservers,
that this book and the defunct “Shakespeare” require to prosper, to go mobile,
to survive, to sur- vivre— living on, in, with, and through our successive acts.2 We
become, in effect, the biosemiotic motor that enables “Shakespeare” to go viral,
and thereby we make it possible for certain kinds of critical operations to count
institutionally as doing something (worth doing).
Our aim in this book is to open a space to think the unreadability Heminge and
Condell deploy as a phenomenon, a specter, that has been haunting Renaissance
and Shakespeare studies for some time now— and that has been conscripted to do
all sorts of work, as the Folio attests. We would like to pick up their modeling of
readers as “wetware,” the living component to media platforms, and think about
what the labor of (not) reading entails.3 Their sales pitch discloses the linkages
between text, media, and reader that constitute the phenomenon that was, is,
and will be “Shakespeare,” reorienting us from the sense that a “play” or “plays”
exist in the world as some self- identical entity, to the plays as a mobile, conflicting,
conflicted, and partially time- bound set of practices. What happens then,
we ask, if we proceed on the assumption that historical fields of study such as
“Shakespeare” or “Renaissance drama” as well as school curricula, professional
Shakespeare theaters, the film industry, and media libraries (on and offline) refer
not to a series of agreed- upon texts or performances but instead, as Heminge
and Condell imply, a series of differently distributed fetish communities, each of
which tunes itself to the shifting auratics of its chosen ritual objects as they are
variously mediated— from manuscript to quarto to folio, on and off and back to
the stage, the movie theater, and the home entertainment system— the ontology
of the thing we study waxing and waning, constantly picking up and dropping
actants as it goes?4 The distribution of readers into different fields of study (performance,
theater history, criticism, theater production, and so on) comes to
constitute not a happy holism but a series of discontinuous and only sometimes
intersecting conversations or crowds that converge on variously mediatized forms
of Shakespearean texts. The “Shakespeare industry,” so it turns out, refers not
merely to an elaborated infrastructure but to the industry of so very many readers
and purveyors, whose vital juices the Bard requires to keep on flowing.
In this model, the labor of all such fetishists (ourselves included) stands in
reciprocal relation to the past labors of reading, living, and dying that our work
posits as “past.” It is by our labors that readings and texts continue to circulate
and continue also to recruit readers or readers become scrollers or whatever word
issues forth from the latest medium in order to designate the activity of its users.5
So what, we ask, would it mean to deactivate this reciprocity and dwell within the
figural or stunt unreadability that Heminge and Condell deploy in order to fund
their own launch of the First Folio as a facsimile of an archive, a Shakespearean
impression that, dear reader, it is for us to recognize? What would it entail to opt
out and do no “work” today but instead to allow the machine to idle and to allow
the specter of not reading, of unreadability, to ramify?
By posing unreadability as a question we seek to interrupt the prevailing economies
for managing the relation between reading and not reading in our various
critical acts and so impede a return to business as usual. The structure of a question
pertains for unreadability does not exist per se as a positivity but only as a
shifting, partial effect of the process of reading itself. It might be said to unfold
at the junctures or limits, as they are drawn, between reaction and response, the
dead and the living, the automaticity of the machine and the immanence of the
organism, and to resist the ontologizing of those limits. We regard unreadability
as the uninvited guest to the surplus of “life” certain texts and authors are granted
by their translation to successive media platforms and their sponsorship by such
a great variety of readers. In this sense, the proliferation of textual aids that offer
to pull you back up the “cliff ” or “spark” life in some dead text constitutes a
community of friendly readers become textual backups to see off the specter of literal not reading.

Posted by Jeffrey Cohen at 7:44 PM

Most provocative! A leap upward in seven-league boots from the productive reassessment of textual studies (and not only for Shakespeare), so that we began again to embrace the volatility of the text. Here, we are challenged to encounter "Shakespeare" as under permanent and mobile construction. Thanks for sharing.