Nicholas of Cusa and the Kairos of Modernity: Cassirer, Gadamer, Blumenberg 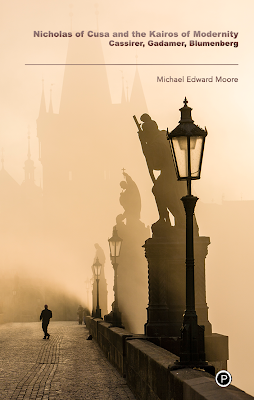 
If modernity is a messianic concept of time, open to an unknown future, then our connection to the present must be restrained. Perhaps we are only sojourning here, poised and waiting for the end of time. On the other hand, just as urgently as during the Renaissance, it would seem that the “heart of modernity” is open to the “heart of antiquity.” The capacity of ruins to communicate, and the interest of ancient writings might be marvelled at again. Nicholas of Cusa demonstrated that a return to antiquity could lead to the discovery of new paths during a historical period of spiritual disquiet and political crisis.

~Michael Edward Moore, Nicholas of Cusa and the Kairos of Modernity


It makes me pretty happy to announce today the publication, by punctum books's Dead Letter Office, of Michael E. Moore's Nicholas of Cusa and the Kairos of Modernity: Cassirer, Gadamer, Blumenberg, which represents a true editorial collaboration between myself, Michael, 2 students in my scholarly publishing course last spring (Brianne Harris and Kate Workman), Daniel P. O'Connell, who helped to review the manuscript, and Dan Remein, who helped to select the fonts. Although some will find it distasteful (or somehow, not properly-critcally distant enough), I like the idea of publishing ventures that grow out of friendly and fully transparent desiring-assemblages, and many (but certainly not all) of punctum's publications are just that -- works produced by groups of friends and friendly acquaintances who are invested in helping each other to bring to light scholarly and other projects in which certain very heavy personal investments have been made; investments, moreover, that may or may not "answer" to what more traditional publishers are interested in publishing at any given moment. Michael's "book" is actually a long essay that would be too long to fit the parameters of a regular scholarly article and too short to constitute a book by most publishers' standards; it is, in short, the sort of scholarly novella for which the Dead Letter Office imprint was developed, and because it is also a commentary on the place of Nicholas of Cusa in mid-20th-century debates over the nature of modernity, and therefore can be used as a strange "device to water the graveyards where, to cadge from Walter Benjamin, some of the dead are turning by a strange heliotropism toward the sun that is rising in the sky of history," it is doubly perfect for the imprint.

Michael is a long-time friend of In The Middle whose work I have commented upon here several times in the past -- e.g., in these posts:  "An Historian's Notes for a Miloszan Humanism,"  "Wolves and Enemy Combatants, Humanism and the Inhuman," "A Time in Which Vagabonds and Skinny Dogs Wander in the Grey Fog: On Sadness," and "Like An Old Inscription That Has Been Scratched and Covered With Leaves: A Meditation Upon the Face" -- and although he is primarily trained as an historian in Carolingian history (see, for example, his recent book A Sacred Kingdom: Bishops and the Rose of the Frankish Kingship, 300-850), much of his scholarly preoccupation and published work is concerned with European intellectual history, especially intellectual events and debates of the 19th and 20th centuries that cluster around issues of humanism, hermeneutics, the legal subject, modernity, sovereignty, and political theology [the above-linked blog posts showcase his work in these areas and also excerpt from it], and further, how this history has been shaped [even when it is not avowed as such] by medieval thought and history.

As such, the current chapbook by Michael will hopefully be a welcome addition to a growing body of work within medieval studies on the ways in which one cannot write a history of modernity, or modern theory, without also considering the uses for which various "Middle Ages" have been put -- e.g., Glenn Burger and Steven Kruger's Queering the Middle Ages, Amy Hollywood's Sensible Ecstasy, Kathleen Biddick's The Shock of Medievalism, Erin Labbie's Lacan's Medievalism, Kathleen Davis and Nadia Altschul's Medievalisms in the Postcolonial World, Bruce Holsinger's The Premodern Condition, and Andrew Cole and D. Vance Smith's The Legitimacy of the Middle Ages, among others. The link between Michael's book and Cole's and Smith's is particularly acute since their book co-opts the title of and also challenges Hans Blumenberg's 1966 The Legitimacy of the Modern Age, in which book's account of modernity Nicholas of Cusa played, in Cole and Smith's words, the "hero" [because, for Blumenberg, as Michael's book also demonstrates, Cusa's thought, although steeped in medieval Christian theology, presaged certain elements of a secular modernism]. And yet, curiously, there is not much actual commentary on Nicholas of Cusa in either Cole and Smith's Introduction to their book, "Outside Modernity," nor in any of the chapters by other authors, except in a few asides, and that's perfectly fine, because every scholar has their own particular preoccupations [for Cole, for example, in this volume, that is Marx and the relation of his thinking on the commodity to Hegel's thinking upon medieval Eucharistic sacramentalism, and for Ethan Knapp, also included here, that is the relation between Heidegger's early phenomenology and his study of medieval scholastic figures such as Thomas of Erfurt].

As Cole and Smith write in their Introduction, "the process of modern self-definition in relation to medieval modes has yet to be fully described," and Michael's book on the various roles that Nicholas of Cusa plays in the work of three important figures in 20th-century intellectual history -- Ernst Cassirer, Hans-Georg Gadamer, and Hans Blumenberg -- will add something of important value to this ongoing [and somewhat under-attended] work. The work that Cole and Smith call for has to be collective, of course, because no account of modernity's relation to medieval thought could ever be comprehensive, nor can it only travel along certain diachronic routes that one might argue are, at this point, fairly over-determined and also claustraphobically hermetic (i.e., Hegel to Heidegger, Kant to Adorno, medieval theology's relation to secularism's self-definitions, etc., without accounts of such Cole and Smith aver any intellectual history of modernity is greatly impoverished, or just plan wrong, but ... which history, whose history, and in which locations?). Indeed, time is more of a knot, with various discourses of thought [including important processes of forgetting and creative acts of re-memorization] entangled with each other in ways that are not always easy to completely articulate. We pull at the threads, but we never catch the whole picture because ... there is no whole picture. And yet, the attempt to render various accounts of intellectual history [various trajectories of thought, however incomplete] in order to better understand our present moment and the ways in which, as Aranye Fradenburg has written, that "moment is characterized by a veritable explosion of archaic signifiers" ["(Dis)continuity: A History of Dreaming," in The Post-Historical Middle Ages], is important. Even when we also acknowledge, as Fradenburg has also written, that, "No engagement of otherness will preserve either the subject or the other in an identity which should already have been theorized as unstable in the first place; but by that very token, we know, precisely, that the other has been encountered" (Sacrifice Your Love).

And important for Michael in his own book, I believe, as an historian, and as he has written elsewhere, is to provide an account of Nicholas of Cusa's life and writings that is also an effort to preserve and understand an "ephemeral" voice from the past that is not necessarily tied to later uses of that voice, and this is also connected to Michael's larger interests in various of his writings to sketch a history of humanist practices across time as rich and varied forms of ascesis (e.g. Pierre Hadot's Philosophy As a Way of Life and Foucault's Hermeneutics of the Subject), but also of poetic self-knowledge. In Michael's schema, and certainly reflected in his Nicholas of Cusa book, the practice of historical reflection can become a spiritual discipline that opposes the "power of forgetting," as the poet Czeslaw Milosz once described it in his little parable "A Historian's Worries."

Nicholas of Cusa and the Kairos of Modernity: Cassirer, Gadamer, Blumenberg, as with all punctum publications, is an open-access e-book and is also available in a modestly-priced paperbound edition: see HERE. Please, also, when downloading the book, consider making a donation to punctum books, as all of our publications are made possible through the efforts of volunteer copy-editors, proofreaders, art designers, and the like. Indeed, we are trying at punctum to also resuscitate the arts of very close and loving editorial curatorship of each and every book we publish, and that is hard work undertaken into the wee hours past many a midnight. Purchasing print copies also helps us a great deal. Vive la open access: