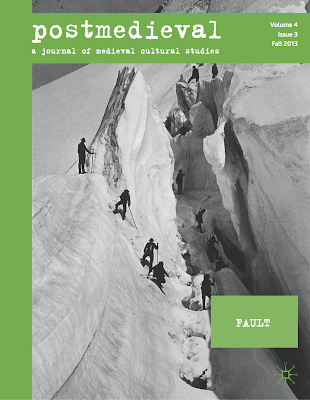 
FAULT: It is yours, the one to blame, for everything. FAULT: Tellurian fissure, index of the means of mountains, earthquakes, islands. FAULT: Deep opening, essential accident, the only way for lovers to whisper: "The wall their houses shared had one thin crack, which was formed when they were built and then was left; in all these years, no one had seen that cleft; but lovers will discover everything: you were the first to find it, and you made that cleft a passageway which speech could take" (Ovid, Metamorphoses). FAULT: Lack, defect, shortcoming, mistake, error. FAULT: Exactly where you are at. The essays included in this special cluster represent post-medievalist work that willfully shares, practically and theoretically, in the significance of fault. The purpose of FAULT is to rigorously practice fault as the way of purpose, as the inevitable space of method. FAULT = to take things too far, to follow and seduce error rather than evade it, to fall hard for something, to creatively stray in the "sylvan wandering that allows itself to become lost enough to find what cannot be deliberately traced," to pursue and persist in the identity of strength and weakness ("for when I am weak, then I am strong. I have been a fool!" 2 Corinthians 12:10), to corrupt, deform, perforate, decay, infect, disease, and totally lead to wonderful decline a text or other form of debris from the past, to colonize a little crumb into a vast continent, to studiously enjoy the fact that life is already over and you have/are lost, to do what you must do, what you will do anyway, but now to do it openly and fully, to a fault. This is not frivolity, but serious folly.

(from original description of FAULT issue, penned by Nicola Masciandaro)

I am pleased to announce the publication this morning of postmedieval 4.3, a special issue on FAULT, co-instigated by Anna Kłosowska and Nicola Masciandaro and edited by Anna, and including a marvelous set of essays on everything from Oulipo (Chris Piuma) to Fumblrs (Asa Mittman and Shyama Rajendran), Möbius strips and topoi of recycling (Brian Macaskill) to plagiarism and the ex post facto-garde (Chris Piuma), Machaut and Bach (Macaskill) and Coetzee to Chaucer's Book of the Duchess (Wan-Chun Kao), and al-Safadi's parodic poetic commentaries (Kelly Tuttle) to early modern Spanish codicology (Heather Bamford), among other unlikely (or is it "untimely," in Jonathan Gil Harris's parlance?) companions. In addition, this issue brings to print the 3 winners of our inaugural Biennial Michael Camille Essay Prize: Haylie Swenson (1st Prize), David Hadbawnik, and Alison Hudson (Runners-Up), whose essays range from Latour and Ian Bogost in conversation with The Sketchbook of Villard de Honnecourt, to contemporary poet Jack Spicer's work with Chaucer's Troilus and Criseyde, to tracing how the cultural and social contexts of particular groups of scholars shaped their conflicting views of violence in relation to Æthelwold's Vitae. There is also a wonderful book review essay by Stephen Murphy, "Carmen et Error," which covers books that have taken error as their theme: Tom Conley's An Errant Eye: Poetry and Topography in Early Modern France, Seth Lerer's Error and the Academic Self: The Scholarly Imagination, Medieval to Modern, François Rigolot's L’Erreur de la Renaissance: Perspectives littéraires, Gordon Teskey's Delirious Milton: The Fate of the Poet in Modernity, and Julian Yates's Error Misuse Failure: Object Lessons from the English Renaissance.

I will thus leave you with the closing of Murphy's review essay which seems to speak to the whole volume:

If the figure of the scholar wanders in displacement, or error, or in exile, he or she may find the poet providing company. Ovid has long offered the classic example of the poet in exile, and the end of his poetic career has often seemed to say something larger about the place of poetry. His case may look like a concrete application of Plato’s decree to eject poets from the virtuous state: they err, so let them wander away. Ovid claims that two ‘crimes’ led to his exile from Rome: ‘carmen et error’ (Tristia 2.207). He erred in both senses: by his fault and by the wandering to which he was condemned. The poet is displaced -- geographically, emotionally, linguistically -- and has only himself to blame, or so he says. With Joachim Du Bellay and Osip Mandelstam, two of Ovid’s illustrious heirs, things become more complex. Error may take the form of Du Bellay’s mistaken attempt to promote his career in papal Rome. The poetic result, as contained in his Regrets, is both nostalgia for the homeland and satire of Roman corruption: that is, both the reversal of errancy and the condemnation of moral error. On the other hand, Mandelstam’s foolhardy distichs against Stalin led to his arrest and exile and ultimately to his death, so it could be said, giving Ovid’s words a tweak, that ‘carmen est error.’ The Russian poet’s own Tristia had already portrayed the modern poet voyaging through history and drawing inspiration from it. Through that displacement the poet and his reader experience the present all the more powerfully. Mandelstam, like other poets and critics at their best, manages to communicate error as illumination:

O if I could hoist a lantern on a long pole
and be led by a dog, under the salt of stars,
with a rooster in a pot, to the fortune teller’s yard.
But the white of the snow eats the eyes to the quick.

The entire issue's contents can be seen HERE. And you can find out more about the issue's cover image (Louis and Auguste Bisson, “The crevasse on the way to the Grand Plateau,” ca. 1860) HERE.
Posted by Eileen Joy at 2:18 PM