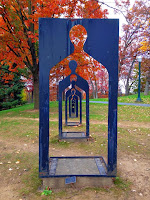 [first, do some crowd review and read Karl]

I'm just back from Bucknell University, where I did a stint as Morrow Scholar in Residence. The residency involved running two workshops: on monster theory, for undergraduates (about 35 showed up for that one; I'd kill to have undergrads that eager) (ok, maybe not kill, but certainly maim); and one on ecomaterialism, for faculty. The former was energetic and wide-ranging; the latter intimate, intense, and so very enjoyable. The monsters workshop allowed me to revisit material I'd written almost two decades ago, in dissatisfaction with my dissertation process (yes, Monster Theory is nearly THAT old) and also cover some recent work on zombies. The Ecomaterialism workshop saw a tough questioning of materials from the postmedieval issue of that name, Prismatic Ecology, and Stories of Stone. 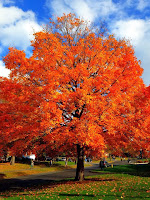 This visit was my second to Bucknell, and it confirmed my extremely favorable impression of the place. The picture perfect campus is large enough so that it sprawls a bit, yet small enough so that to take a walk with a faculty member is to watch student after student stop that professor to say hello. There's an intimacy to the community I find appealing. I also noted among the faculty a willingness to spend abundant time with students outside the classroom. Virginia Zimmerman, the Victorianist, told me how she takes her students to a nearby cemetery to read the graves and think about stone, memory, and endurance. Alf Siewers, the medievalist, spoke to me of the trips he has taken with his students around the Susquehanna Valley. The department chair, Ghislaine McDater, brings her class to New York for museum work. On Tuesday evening I went to dinner at a bistro in the little town of Lewisberg and it was completely filled with students, Bucknell faculty, and the neighbors of those who took me out. That sense of community is seldom found on an urban campus like GW. I can imagine that for some people it would feel suffocating, but I've dreamt sometimes of being in such a place. I can see how good it is for the students to be surrounded by that intensity. 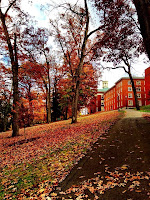 Alf was kind enough to take me on an evening hike up the bluffs at the confluence of the Susquehanna. I thought a great deal about his book during that hike, and the inspiration it gave me early in my own ecological project. The sky was growing quickly dark, so by the time we reached the top a crescent moon had risen and the first stars were shimmering. The smell of autumn leaves and the very slight wind made for a perfect moment looking down at the river. Alf narrated the story of this area's settlement by Indians, then by Moravian missionaries -- and spoke a bit about the provisional, ad hoc, experimental ways they attempted living together before other settlers and much violence arrived: moments of fragile community, never untroubled, never without peril, but developed in modes that attempted sustaining rather than reducing or destroying.

THANK YOU to Bucknell's English Department for making my residency so memorable. My son Alex is now old enough to be thinking seriously about college (scary, right?) I did not attend a liberal arts college like Bucknell, but am thinking it would be the kind of place where he would thrive.