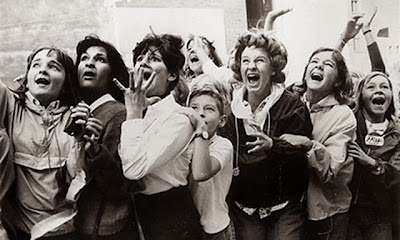 Myra Seaman, Holly Crocker and I are thrilled to announce that postmedieval is launching today our second online, open Crowd Review, of Louise D’Arcens’ special issue on “Comic Medievalisms,” which features the following essays:

·      “One Does Not Simply Laugh in Middle Earth: Sacrificing Humor in Peter Jackson’s The Lord of the Rings” — Brantley Bryant
·      “You Had to Be There: Anachronism and the Limits of Laughing at the Middle Ages” — Louise D’Arcens
·      “Medieval Comic Relief: Cannibal Cow, Duck’s Neck and Carry On Joan of Arc” — Stephen Knight
·      “ ‘simply to amuse the reader’: The Humor of Walter Scott’s Reformation” — Andrew Lynch
·      “Said in Jest: Who’s Laughing at the Middle Ages (and When)?” — David Matthews
·      “Valhallolz: Medievalist Humor on the Internet” — Kim Wilkins

We are especially excited that this Crowd Review is being hosted and stewarded by Kathleen Fitzpatrick and company at MediaCommons, based at New York University, and which describes its mission this way:

MediaCommons is a community network for scholars, students, and practitioners in media studies, promoting exploration of new forms of publishing within the field. MediaCommons was founded with the support of the Institute for the Future of the Book, and with assistance from the National Endowment for the Humanities. Through this network, we hope to refocus scholarship in the field on the communication and discussion of new ideas in the field. . . . Our hope is that the interpenetration of these different forms of discourse will not simply shift the locus of publishing from print to screen, but will actually transform what it means to "publish," allowing the author, the publisher, and the reader all to make the process of such discourse just as visible as its product. In so doing, new communities will be able to get involved in academic discourse, and new processes and products will emerge, leading to new forms of digital scholarship and pedagogy.

The emphasis in MediaCommons’s peer-to-peer reviewing system is … not simply on being smart, but on being helpful — and I don’t want to underestimate the enormity of that shift … . [L]ittle in graduate school or on the tenure track inculcates helpfulness, and in fact much mitigates against it. However, for network-based publishing to succeed, the communal emphasis of network culture will have to take the lead over academic culture’s individualism. Again, this is not meant to paint a rosy picture of a community governed by consensus, in which we all just happily get along, but rather to suggest that our ethical commitment to one another requires an active participation in discussion and debate, particularly as listeners; “helpful” criticism avoids logrolling, but it also avoids snark, instead working to press both author and reader toward a deeper understanding of the questions involved. This open discussion will have to become the primary point of network members’ commitment, placing the advancement of the community as a whole alongside the advancement of their own work; only in that way can both the individual scholar and the field as a whole succeed.

As some might recall, after our first experiment, Holly Crocker published in postmedieval FORUM II a cluster of essays reflecting on “the state(s) of review,” comprising reflections on traditional academic peer review and open review experiments by myself, Jen Boyle, Martin Foys, Bonnie Wheeler (director of Palgrave’s New Middle Ages book series), Sarah Werner (Folger Library and an editor of SQ), Katherine Rowe (another editor of SQ), and Sharon O’Dair, and you can read those reflections HERE. In my own piece, “Not Far From, but Close to, the Madding Crowd Review,”

We do not think and write in a vacuum, … so why do we want our work to be reviewed in one? Further, isn’t it about time we began to set aside and even refuse the image of the humanist as one who (heroically, or tragically) works alone at her desk with her books and austerely conceptualized interlocutors, with her career supposedly hinging on the praise of her ‘singular’ genius above her peers? We might recall that the term ‘genius,’ in the Latin, originally meant the ‘tutelary’ god or attendant spirit who ushered persons into the world, watched over them, and then conducted them into the afterworld. We might work harder to serve as each other’s tutelary and attendant spirits: genius, I truly believe, is a collective endeavor.

The sciences, of course, have been leading the way with open and even post-publication review, and the “internetz,” over the past 10 or so years, have massively shifted the way we read each other’s work, interact and learn with each other as colleagues and peer-learners, and also relate to each other as persons with affects we are now more willing to share — in a sense, to be more vulnerable with each other, and perhaps finally smudge a little that supposed line between “work” and “life.” It is our belief at postmedieval that we definitely need to be moving in the direction of more open review experiments (and let’s at some point hope to make this the norm, and not just the “experiment”), which comprise a valuable form, in my mind, of fraternity, or friendship, and that even the definition of what a “peer” is needs to be more capaciously contoured, to include not just the specialized experts of one’s narrow sub-fields but also members of the more broad intellectual community, both within and outside the university proper — in short, anyone with a vested interest in (or passion for) the subject matter at hand and who has some sort of constructive and helpful advice to offer, whether in terms of methodology and theory, evidence and sources, structure and organization, styles and modes of address, and so on. The crowd review, therefore, (hopefully) models a learning process, and a learning community (even a sort of guild — hey, we’re medievalists!) in which you never know where your best ideas (or advice for revision) might come from. This is to labor together, collectively, on behalf of a humanities we ideally hold in common, where we don’t necessarily agree about anything, but where we share some framework of solidarity.

All of the articles in “Comic Medievalisms,” initially solicited by Louise D’Arcens, have been reviewed by her multiple times and have also been revised multiple times by the authors, and they have already been accepted for publication by both Louise (an expert on Comic Medievalisms if ever there were one: she was recently awarded a 4-year Australia Research Council Future Fellowship for her project “Comic Medievalism and the Modern World,” and has a book forthcoming from Boydell and Brewer, Laughing at the Middle Ages: Comic Medievalism) and the editors of postmedieval (myself and Myra Seaman). Our Crowd Review, hosted by MediaCommons Press, will serve as a second layer of what might be termed “external” review, with the implicit understanding that all comments offered (and from whatever corners) are provided to constructively assist the authors in strengthening their articles. The Crowd Review is thus a form of collective editing and even co-composing of material already deemed fit for publication, but which nevertheless could benefit from a multiplicity of perspectives, amateur to professional, non-specialist to specialist. As Jen Boyle and Martin Foys wrote in their “Editors’ Vision Statement” for postmedieval’s first Crowd Review of our special issue on “Becoming Media,”
Why not invite a crowd?  The concepts and frames of webby/webbies are likely to produce some anxiety.  The “web” has become somewhat of a pejorative among some professionals, evocative as it is of the crowd on the street and “average” Joes and Janes. The concept of the crowd to some might seem particularly inimical to academic institutions or professionalism.  Crowds imply mobs. Crowds imply amateur opinion, cajoling, and yelling.  But crowds also now connect with activities like “crowdsourcing,” an open call for collaboration among a large group of informed participants interested in exploring, creating, or solving.   And crowds also change things. The crowd potentially embodies an exciting challenge to the isolation and insularity of traditional academic organizations, as an opportunity to experiment with the re-structuring of professional and disciplinary affiliation.
The Crowd Review for “Comic Medievalisms” (go HERE) will run from Wednesday, November 6th through Sunday, December 15th, and we invite and encourage everyone here to please participate as reviewers of any portion of the issue you like. And if anyone has any questions or concerns about how to participate, please contact either Eileen Joy (eileenajoy@gmail.com) or Myra Seaman (seaman@cofc.edu) directly.
Posted by Eileen Joy at 12:28 PM

Thanks so much for this post, Eileen. You eloquently describe the kind of helpful, collaborative scholarship that we in the Material Collective also believe is essential to the future of academia. Onward!